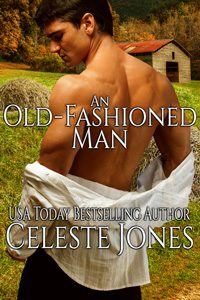 Despite her dread at the punishment that awaited her inside, Lara’s heart fluttered when she caught the first glimpse of Caleb’s house—their house. What would it be like to be his wife, to create a family in this new, strange world?

“How soon do you think we should get married?” The words were out of her mouth before she realized she’d spoken out loud. She gasped and slapped her hand across her lips, as though trying to push the words back in.

After what seemed like an immensely long pause, Caleb took her hand. “I think we should talk about that after your punishment.”

Lara would have preferred a quick and enthusiastic ‘right away’ but accepted the fact that Caleb would not be swayed from the issue of her discipline.

“Take off your pants and stand in the corner by the window,” Caleb said as soon as they entered the bedroom.

She considered protesting, but based on the determined set of his jaw, Lara did as her future husband instructed. Although they had done much exploration of each other’s bodies the night before, the bundling bag had provided a thin barrier to protect her modesty.

At least the long man’s shirt she’d borrowed covered her bottom from his view. Maybe this wouldn’t be as humiliating as she’d thought.

Lara stared into the corner and focused on steadying her breath. She trusted Caleb. He was to be her husband. He would punish her properly for her bad behavior, but no more than she deserved or could handle.

So focused on her breathing and thoughts, she didn’t notice that Caleb had moved to stand behind her. When he began to unbutton her shirt, however, she became very aware of his presence. She clutched the sides of the shirt. “Caleb, no. We mustn’t.”

Caleb nipped her ear with his teeth then whispered, “Shhh, little maus.” His hands expertly undid the buttons, then knotted the tails of the shirt between her breasts. She was like Daisy Duke but without the cut-off shorts and cowboy boots.

Instinctively her hands went to cover her womanly parts.

Caleb kissed her neck and then said, “I knew you were a modest young woman. You may cover yourself if you wish, but know that once we are married, your body will be mine, only mine.”

He skimmed his hands the length of her back, caressed the swells of her bottom and squeezed her thighs, his thumbs brushing the opening to her womanhood. Lara moved her hands from shielding her mound to brace herself against the wall. Caleb stroked his thumbs back and forth a couple of times and her legs began to weaken.

Caleb moved away and she felt cold and vulnerable without his closeness. “You are too tempting, my Lara. We have business to attend to. I want you to think about why you are being punished.”

How can I think about that when I’m soaking wet? Lara kept that thought to herself and simply nodded.

A quick pinch to her left bottom cheek got her attention. “Words, not nods, Lara.”

Breathe, she reminded herself. Why am I being punished? Oh, yeah, I left my friends out in the woods while I was enjoying a good time with Caleb. Well, Brittany wasn’t really a friend, so maybe she didn’t count. And what was the deal between Brittany and Daniel? Boy, were the sparks flying. Hard to imagine that Daniel would put up with Brittany and her bratty ways. The switch would probably do her some good.

The idea of Brittany getting a thorough spanking pleased Lara.

“What are you smiling about? You’re supposed to be thinking about why you are being punished. Do you need me to remind you of your bad behavior? Have you forgotten about leaving your friends out in the cold woods? Or the fact that you lied to me when I asked if you’d been alone all this time? How can we be husband and wife if you hide things from me?”

Chastened, Lara pushed away gleeful images of Brittany getting her just deserts and directed her thinking to her own poor choices. She relived the fear and misery of the nights in the woods—the cold and darkness, the hunger and anxiety. Every minute of that time had been horrific and she had made her friends stay out there a whole day longer than necessary.

She hung her head in shame.

“Why are you hanging your head, Lara?”

“B-because I feel horrible for what I did.”

“As well you should. Have you apologized to your friends and to Mrs. Potter?”

“N-no.” It hadn’t even crossed her mind to apologize to them. What sort of person forgets to apologize? Not a good one, that’s for sure. “Oh, Caleb.” She turned to him, guilt and condemnation flowing over her. “I acted horribly. What can I do to make amends?”

“Well, first of all, you ought to apologize to the others.”

“Yes,” she replied; much as she hated to make a spectacle of herself, she owed them an apology, at the very least. “But, I just feel so guilty.”

Caleb positioned himself on the edge of the bed and patted his lap. “This is where you will release the guilt.”

At that moment, Lara realized she was bare from the waist—actually the breasts—down. Doubled over, she attempted to cover her nudity, though it was probably futile at this point anyway. Caleb patted his lap again. “I’m waiting, Lara. If I have to tell you again, it will add to your punishment.”

Thoroughly embarrassed, Lara hobbled her way to Caleb in an effort to both obey his command and protect her modesty.

When she stopped in front of him, Caleb touched her elbow indicating that she needed to stand up straight. “B-but you said I could shield my… my… you know… myself… from you. You said you liked my modesty.”

“I do like your modesty,” Caleb said, helping her to stand upright before him. “But I like looking at you even more.” He made a slow inspection of her body with his eyes.

She ought to have blushed crimson from his perusal of her intimate places. Instead, Lara was proud of her body, proud that it pleased Caleb. She stood straight and still, accepting, even inviting, his appreciative gaze. Modesty and shyness disappeared. Reaching between her breasts, she opened the knot of her shirt. Separating the sides of her covering, she revealed her breasts to Caleb. Her nipples, deep red and pebble hard, ached for his touch. Dropping the garment to the floor, she shared her body with the man who was to be her husband.

She was a woman. His woman.

Caleb’s gaze raked hungrily over her nudity. “You are beautiful, my Lara.” His voice was a husky whisper. Caleb reached out to her and helped her into position across his lap then stroked his palm across the flesh of her buttocks. “I know that I said we would discuss a time for our marriage after your punishment,” he stroked past her cheeks and between her thighs, “but I think we both realize it needs to be soon, very soon, before we commit even more sins than we have already.”

“Or are about to…” Lara said and giggled.

A firm swat landed on her bottom. “That’s for being sassy.”

“Yes, sir,” she said and stifled another giggle.

“It seems we have both gotten distracted from our purpose here,” Caleb said, and Lara felt him shift on the bed.

“Ouch!” she couldn’t help crying out.

The switch stung intensely. There was no gentle warmup. No playful interlude where he teased and tickled her with its thin, soft tip. None of that. Suddenly Caleb was all business.

The switch whooshed through the air a fraction of a second before contact and the sound made Lara tense up her muscles in anticipation of the impact.

“Relax, Lara. You’re making it worse for yourself.” Caleb’s hand gently brushed across her shoulders and down her back. He repeated the motion over and over at a slow and steady pace. Lara focused on her breathing and calmed her mind.

Then her punishment began in earnest. The slender strip of wood fell over and over across the bare cheeks of her bottom and Caleb varied his speed and intensity so that just when she began to think perhaps the punishment was over, another stripe landed on her tender rear end.

That little switch, which seemed like just a decoration when hung above the bed, was really a fearsome implement of correction. It prickled across her delicate flesh at random intervals, leaving hot, bright-pink welts in its wake.

Held firmly over Caleb’s lap, Lara’s only recourse was to writhe from side to side in an attempt to avoid the hateful switch. That only earned her sharp strokes of the implement to the backs of her thighs, which were even more excruciating than the lashes across her bottom. Frustrated and out of options, Lara finally accepted her punishment without further struggle.

As she gave herself over to the punishment, guilt about her behavior slowly ebbed away.

Any naughty thoughts she may have entertained moments before vanished in the onslaught of her punishment. With her senses limited, Lara focused on the reason for this spanking.

She had lied to Caleb and she had left her friends out in the cold. While they were tired and hungry, she had been feasting at the Miller family dining table. Guilt and shame filled her, but she found that with each successive impact of the switch on her bare flesh, some of the anguish left her. She had done wrong, she was remorseful, and now she was being punished. Once that was completed, she could put it all in the past and move on with her life. Her life with Caleb.

Though her mind and heart understood, her butt felt the brunt of it. With a flurry of quick, stinging strokes, Caleb finished the task and she started to relax into his touch.

She envisioned tiny electric sparks dancing down her back where his fingers stroked her spine. When her nose detected what could only be the shameful aroma of her arousal, she squirmed and attempted to clench her thighs together, hoping to stem the flow of her juices.

Caleb was not having it. The switch snaked its way from her knees up the inside of her thighs and forced her legs apart. Caleb slipped his thumb into her wet opening and probed the rim until he found the hard button of her desire. He used his fingers with surprising skill, pinching and teasing the nub of her clit until her hips bucked against his lap and what had started as punishment ended with a sweaty, squirmy, blushing orgasm.

When she was spent, Caleb turned her over and gathered her in his arms.