At Her Husband’s Command by Lily Harlem – Extended Preview 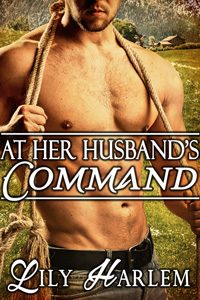 “Yes, Sir.” Melody spread her legs and held onto Ivor’s shoulder. What was his plan? They had four guests sitting in the next room, waiting for them. Surely he wasn’t going to…

“You were my sweet, young, naïve little virgin and touching you for the first time nearly made me come straight away,” he said, his breath hot and his voice low.

“You made me come,” she whispered. “I didn’t think I would, that first time, but I did.”

“Spectacularly.” He smiled and slipped his finger through her pussy lips and touched her clit.

“Mmm…” She groaned. It didn’t matter to her that they had guests waiting. It was Ivor’s decision; if he wanted to finger her then he could. He was in charge.

“This sweet little cunt,” he said, “all mine, only mine.”

“Make me come.” She gripped the material of his shirt and angled her pelvis toward him.

A smile tugged at his lips and he increased the pressure on her clit, setting up a fast little circular motion.

She fluttered her eyelids shut. He was so damn good at generating pressure that erupted in bliss throughout her body.

“Ah, yeah, baby, that’s it, feel the tension building, the need for release, the need for a big hard cock to make you come over and over again. Imagine you’ve never had cock in your pussy. But it’s here now, about to plunge into your virginal depths, stretching you, breaking its way into the very core of you.”

“Yes, you, just you, Sir.” She kept her eyes closed and remembered their wedding night—a luxurious hotel room in London, black carpet so deep her toes nearly disappeared into it, red silky sheets that were cool and smooth on her skin—her new husband naked, his erection thick and dark, and a look of lust and love on his face.

She recalled his touch, the first man to touch her there—his mouth on her breasts, between her legs, his cock filling her then bringing her to orgasm with the expert roll of his body in and over hers.

Panting now, she clenched her internal muscles. Soon an orgasm was going to erupt within her. While club members sat hungry and waiting for their dinner, she was going to come in the kitchen. She’d dampen her master’s hand, grind against him, try to hold in her cries of release.

He worked her harder. The tension was about to spill.

She held her breath. Her pulse thudded in her ears.

“Hold that thought,” he said, stepping away and allowing her skirt to float down to cover her pussy and thighs.

“Ivor…” she gasped, her arms flailing for him. She opened her eyes. “I was just about to… Sir… I…”

“I know.” He bit on his bottom lip. “You were just about to orgasm.”

“Yes, but…?” She was frantic and furious. What was the point in that? What was he doing?

He raised his fingers to his nose and inhaled. “I want…” he said, “for us to remember the sexual frustration we had when you were a virgin and I was waiting for us to be married before I touched you.”

“You want that again? But why?” It had been so hard.

“Yes, just for one night.” He shrugged, then walked to the sink and ran the tap. He washed his hands. “Maybe I’m just being melancholy, thinking about us when we were young and everything was new.”

“New.” Melody pushed her hands through her hair. Her brow was a little damp. Her pussy was hot, her heart rate still clattering along at a fast rate.

She thought of Lottie, all young and pretty, with no doubt a prim, taut pussy that hugged her master’s cock. Is that what Ivor wanted?

She was aware of the colour draining from her face as she clutched the kitchen work surface to her left. Jealousy once again raged through her veins. Hot and acidic, it scorched over her skin and made her scalp tingle. “Lottie,” she managed.

“What?” Ivor wiped his hands on a cloth then threw it aside. It landed on the table.

He tipped his head and studied her. “If I wanted to play with Lottie and Rupert permitted, then I would, that’s how the club works.” He paused. “But you know that.”

“It’s different, you want to…” She could hardly bring herself to say it.

“No, I don’t.” He shook his head and his frown deepened.

“But how can you not? She’s young and pretty, virginal almost and dressed in white.” She gestured to her own outfit. “Which is clearly your thing tonight as you picked this for me.”

He tipped his chin up and pulled in a breath. His nostrils flared. “I will not have this.”

His voice was low and dangerous and Melody wrapped her arms around her waist. Nervousness romped through her but she was unable to stop the emotions spiralling.

“You know full well that I only want you,” Ivor said. “You’re the only woman I have fucked for the last ten years and the only woman I intend to fuck for the rest of my life. I might play, do a scene, but I’ll never sink my dick into another cunt other than yours.” He stepped up to her. “And you will only ever have my cock inside your pussy.”

His wide shoulders filled her vision; he was breathing fast, like her.

“So I will not tolerate you not grasping the depths of my desire for you, sub. I only want you and you will accept that.” His eyes flashed as he curled his hand around the back of her neck and pulled her close. “Tell me you understand me.”

She pressed her hands over his chest. “Yes, yes, I understand.” And she did. There was no denying the vehemence in his tone or the intensity of his words.

“Never forget it or you will be severely punished.”

“Because I won’t have you doubting my love for you when what I’m doing is replaying one of the most amazing nights of my life.” He touched his nose to hers. “You will be my virgin bride again tonight, and we will feel the torturous frustration we did back then.”

He took her hand and slid it down to his groin.

Melody pulled in a deep breath. He was rock solid and his cock strained at the material of his trousers.

Ivor wasn’t usually one to let an erection go past without finding relief, but it seemed this evening, that was part of the fun.

“So,” he said quietly. “We will both go back into the dining room and entertain our old and new friends. We will serve a nice meal, most likely there will be some playing as there usually is, and you will not have another thought about me wanting Lottie.”

“Then later on, I’ll fuck your tight pussy the way I did that very first time.”

Melody swallowed. She wanted him to fuck her now. Show her how much he loved and desired her. “But how…?”

“How will I make your pussy tight?”

“I have an idea.” He stepped away.

Melody felt cold without him pressed against her. “What? What’s the idea?”

“You’ll just have to wait and see.” He gestured to the salad. “Now take that in and make sure our guests all have water and wine to go with their meal.”

For a moment she hesitated. Wanting to ask more questions. Then she did as Ivor had instructed and took the salad into the dining room.

The meal went well. Everyone seemed to enjoy it and the conversation flowed around the table. There was much interest in Lottie and Rupert’s new home, and Lottie’s new shop, which she’d just opened and would be selling organic beauty products.

Tia announced that she and Kyle were heading to the US to see her mother for a few weeks and was planning on visiting some club friends who’d moved out there the year before.

When the plates were empty, Ivor stood and began to clear them away.

“That was delicious,” Tia said.

Melody carried the near-empty salad bowl into the kitchen.

She then went back and retrieved the breadboard.

“No, not that,” Ivor said sternly as he lifted the bowl the beef had been served in.

“Oh, okay, Sir.” She set the board down in the centre of the table.

Ivor held her gaze for a moment then took the bowl into the kitchen.

Melody noticed the water jug was empty so followed him, planning on replenishing it.

As she waited for the jug to fill, he came up behind her.

He slotted his hard cock between her buttocks. “I want you so badly.”

“Not until our wedding night.” He chuckled and set a kiss on her temple.

“Which is when?” She sent a quick prayer heavenward that he wouldn’t say next week.

“In a few hours, when our guests leave or if they decide to go and play together.” He paused. “Heaven help me though, you’re so damn gorgeous.”

She swallowed and her pussy trembled. Would she be able to wait that long? What if they didn’t play and sat around chatting for ages? And why had the breadboard been left on the table? What did he have in mind for that?

“Is it mean to say I want them to go now?” She pressed the crown of her head into the groove of his neck.

“You’re forgiven.” He reached past her and turned off the tap. The jug was overflowing. “Just make sure you stay wet for me.”

He nuzzled her neck, kissing and licking the sensitive area just behind her ears. “Let me just check.”

Once again he pulled at her skirt, exposing her thighs, then her bare pussy.

Melody didn’t need telling to spread her legs; she did it almost instinctually.

He held her closer, as if making sure she was in no doubt how painfully hard he was.

She writhed against him, then caught her breath as he swiped through her labia. She was slick and damp, her clit trembling with the need for stimulation.

He gently eased one finger into her pussy.

She groaned and tried to seat herself lower onto him but he didn’t allow it. Instead he pressed the heel of his hand to her clit, giving her some of what she needed.

“I remember seeing you, in the church in that white dress,” he murmured. “All our family and friends there, and do you know what I was thinking?”

“What?” She was breathless, her knees shaky. “What were you thinking, Sir?”

“That as soon as I possibly could I was going to sink my cock into my new wife and show her how much I loved her.”

“Yes, you did that.” She nodded. Damn, it was so good when he touched her. It always felt like the first time. She couldn’t imagine not being greedy for more.

He stepped away, his movements abrupt and once more making Melody chilled at the loss of his body heat.

She spun around, holding the dripping jug of water, and her skirt fell into place.

“Come on,” he said, moving a little stiffly toward the door. “We should go to our guests; it’s time for the fun to begin.”

She was about to ask what fun but he’d already left the room.