Begging to Be Broken by Emily Tilton – Extended Preview 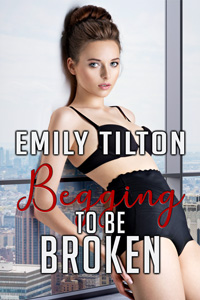 Master Trent used my mouth gently, just as he had said he would. Holding my head down, so that all I could see was his lap, he steadied his huge erection in his left hand and lifted his hips from the couch just a few inches. He moved with a slow, steady rhythm, so that his hardness entered me just far enough to press against my tongue with a little firmness each time.

With each degrading thrust I felt I might gag, but I never did. My training master knew how to teach a young woman, it seemed, to perform this shameful duty. He knew how to put a girl on her knees in front of him, and how to make her serve his rigid cock’s pleasure.

I whimpered around the moving shaft as Master Trent pressed a little deeper into my mouth, almost to the back. He filled me there, making my eyes water and my knees bounce down below as the humiliation of it sent a jolt through my hips.

Both his hands went to the back of my head, and for a moment he held me down with his hardness deep inside, between my lips and over my tongue. I let out a muffled, panicked cry around the thick shaft, sure I would gag. Master Trent pulled my mouth off before it happened though, as I sobbed, eyes watering copiously between my closed lids.

He left the big head of his penis in my mouth and held me still again. His left hand left my head, and it must have gone back to his cock, because he moved it in my mouth, side to side, up and down, rubbing the knob against my lips and the inside of my cheeks. I let out a tiny sob at the abject humiliation of the act, the feeling of having the part of me that should be able to plead for mercy used as a mere device for my master’s enjoyment with his penis.

“Open your eyes and look at me,” he commanded, his voice turning a little gruffer and more severe.

That brought another sob from my chest. If the sensation of the cockhead moving in my cheeks had seemed degrading, the idea that I would have to obey this command struck me as much worse: to look my trainer in the eyes while his hardness filled my mouth seemed like a shameful acknowledgment that I had indeed become only a fuck toy.

Still a virgin, and yet already a bed girl. My bottom squirmed at the mortifying surge of hot arousal the thought raised between my thighs.

Master Trent might save my pussy and my bottom for later, but from now on he would use my mouth just as he pleased—as often and as thoroughly as his hard cock demanded for its lewd satisfaction.

The words floated up from my memory—my body’s memory, somehow, rather than my mind’s: no choice.

Did I have to open my eyes? Did I have to look up into the dark gaze of the man who had taken me captive, who had spanked me over his knee, then made me kneel and take his hard cock into my mouth?

My hips jerked and I felt the soreness Master Trent had left in my bottom, to teach me obedience. The cheek that held his penis’ head burned from his slaps.

He’ll whip me. Just like Joan had said, I knew this man would whip my bottom until I did exactly as he told me.

I whimpered around his cock as I opened my eyes, turning them upward to meet his. Master Trent smiled. He moved his hardness in my mouth, playfully. A wave of shame and arousal so strong that it made me feel faint traveled outward from my pussy through my whole body.

He didn’t tell me not to close my eyes or look away—not to look down, even, submissively lowering my gaze so as not to offend the man who would punish me for disrespect or disobedience. He didn’t have to: I knew, somehow, with absolute certainty, that I would get a whipping for breaking the degrading eye contact. My fear of feeling the strap across my bottom sent a shudder through my limbs at this slightest hint of the notion, welling up in my mind.

His right hand tightened in my hair and he pressed my face down again, more firmly than he had yet done since he had started to use my mouth. I gave a sobbing cry around the shaft that filled me, made my jaw ache, as I watched Master Trent’s smile broaden.

“Just like that,” he repeated. “Now I’m going to teach you a little more. Lower those eyes for me. From now on you may not look your master in the eye without permission.”

I felt my forehead crease hard. Looking into the face of the man who had his cock in my mouth had seemed so shameful a moment before. Not being allowed to do it suddenly seemed even more humiliating. A new tingle, a new ache of arousal made my hips tremble so that again I felt the lingering discomfort of the spanking in my bottom-cheeks, again I imagined the whipping I would get for disobedience, again I understood I had no choice.

Master Trent held his huge, hard cock in his left hand, his fist low down on the rigid shaft. He forced my mouth down until my nose pressed against that big, strong hand and then he lifted my face off his lap again. He pulled me up until only the head of his penis remained in my mouth and then he swiftly drove me back onto his hardness, thrusting his hips upward at the same time.

I understood, and my understanding brought a little cry of shame around the enormous, surging manhood in my mouth. My trainer had decided to teach me how to receive a real face-fucking. He had placed his hand precisely so that I wouldn’t gag, though I felt I might with every rapid thrust. I heard a new sound, a rhythmic, wet, chucking sound coming from my mouth, from the receptacle Master Trent used for his pleasure.

Behind my back I twisted my hands together. The sudden urge to move them forward, around my hips, to touch my pussy and assuage the heat and the ache my master had awakened with his terrible humiliation, with his thrusting cock, nearly overcame a new twinge of fear for my backside if I disobeyed.

“Yes, sweetheart. You want to touch yourself, don’t you? And you know I’ll get the strap out of my bag if you do.”

“You know I’ll put you over the arm of the couch. You know I’ll whip you until you can’t walk comfortably for a week.”

My whole body bucked at his words, my back arching. Master Trent kept moving my mouth on his hardness, so that my nose came up against his hand, over and over. I felt his penis grow, it seemed to me, even harder and bigger.

Deep in his throat my trainer gave a grunt of satisfaction.

I had never come. How could this evil man… how could he just say he would… he would do that?

“I’m not going to come in your mouth this time, Tatyana,” he growled, his voice thick with his arousal.

With each driving entry of his hardness into my mouth I whimpered. What did it mean? What would he do?

His rhythm got faster, his left hand moving a little further down the shaft so that I had to take more of him. With a hot surge of blood to my cheeks I realized that yes, indeed, I had begun to learn.

I’m learning to suck the cock. To give head. My pussy clenched and I cried out, my eyes closing.

“Eyes up,” Master Trent commanded in a voice that sounded like the urgent warning noise an animal might make before attacking.

At the same moment he pulled my face up and held it in place, pumping his hardness in his other hand. The shaft glistened with wetness from my mouth, the moisture lubricating my master’s cock for the enjoyment his own hand could give. His eyes had narrowed, his face grown frighteningly severe, hard and arrogant.

I cried out as the white seed spurted, suddenly, from his penis onto my face. Sternly he held my head there as I tried to twist away. The hot, viscous fluid landed on my cheek, my chin, my forehead. My tongue circled my lips: my whole mouth felt even stranger than it had when Master Trent had pulled the gag from it.

“There, Tatyana. There you go,” he said. “So pretty with your master’s come on your face.”

I took my lower lip between my teeth, feeling my forehead crease deeply. My eyes couldn’t look away from the huge erection my trainer kept pumping gently. I let out a little sob of shame and arousal as Master Trent brought my head down a half an inch further, so he could rub more of his semen across my cheek.

“Good girl,” he murmured. The phrase seemed to travel through me, from my ears to my brain to my pussy. I chewed harder on my lip, trying not to emit yet another whimper. I closed my eyes so that I wouldn’t have to look at my master’s hard cock.

I tried to think of Joan, but the picture of her in my mind seemed to fade further away the more I reached for it. Why had I said I would do this, would wait for a man to come and kidnap me, take me into sexual servitude, instead of going to the police? My brow furrowed even harder as I tried to remember—the details strangely eluding me.

Master Trent seemed content to let me keep my eyes closed as he rubbed the tip of his penis over my lips, a deep growling noise of satisfaction rumbling in his chest. I had the sudden impression he wanted me to think about what he had just made me do, about the choices I had made when I had had no choice.

He doesn’t know the half of it… the smallest part of it, I thought. I felt a little thrill, a tiny swelling of a strange pride in my secret mission. Was that why I had told Joan I would do what her bosses wanted? It must be, I realized with growing certainty: I would save the world as Joan’s Groupe had asked me to do.

I would deceive this Master Trent into thinking he had begun to train me, that his techniques were working. The feeling that this huge man understood me, that by dominating me, taking me, selling me he would give me what I needed—hadn’t Joan said I would feel that, and that I must remain careful not to let it take hold?

Oh God. My lips pursed automatically. My mouth watered, and I opened my eyes involuntarily, wanting suddenly to see the manhood that had just taken its pleasure between my lips and left Master Trent’s essence all over my face.

I planted a little kiss on the head of my master’s still hard penis, feeling his come besmirch my lips. My cheeks burned, and I ached down below.

Inside my head, my reason seemed to come back into command. You’re fooling him. Good job.

“Alright, sweetheart,” Master Trent said. “Let’s get you cleaned up, and get you nice and smooth between your legs, the way a bed girl should be.”