I had no idea what was going on. I didn’t know if I should be 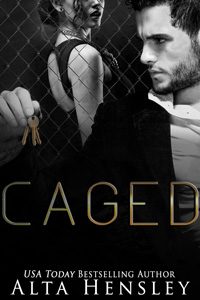 afraid for my life, or livid with my attacker. Fury sizzled through me, but so did terror as I was held pinned down on Eddie Vasco’s lap.

Should I demand my release?

Should I beg for mercy?

Should I just accept my fate and…

What was my fate?

Agonizing torture that I had only seen pictures of or heard horror stories about?

And what about my family? Were they in danger as well?

“The quicker you learn to obey me, the better, Miss Bell,” Eddie said as he applied pressure to my trapped hands at my lower back. One of his hands engulfed both of mine, and no matter how hard I tried to free myself from his grip, I made zero progress. I knew the man was strong. How could he not be, considering he was one of the most feared men in New York City? But I never considered myself to be a weak woman either.

I tried to kick my legs, but they were restrained as well with the weight of his leg. There was absolutely nothing I could do. And that fact became even more evident when the man reached for the waistband of my panties and yanked them down to my knees.

“Stop this!” I squealed, but already knew my demands were being ignored. “Stop!” Was he going to rape me? I wouldn’t have profiled Eddie Vasco as a rapist, but I was starting to doubt every single thing that had led up to this moment.

“You clearly don’t know who I am,” he said. “I’m the boss. I take commands from no one. Especially you.”

My ass was completely bare. My pussy rubbed up against the fabric of his pants with every move I made as I attempted to escape his hold. I had never been so vulnerable or humiliated in my life. Or so I thought…

Nothing could have prepared me for what came next.

I heard the sound before I registered the pain. The palm of his large hand came crashing down upon my ass—over and over again in rapid fire. I remained completely inaudible as a criminal spanked me like an errant child in the back of a car while another man I had yet to see through the tinted glass drove on as if this was a common occurrence. My silence was not due to submission, but out of utter shock.

Was this really happening?

Was the head of the Vasco mafia family seriously spanking me over his knee instead of fucking me against my will as I had expected?

As each slap of his hand grew in intensity, so did the burn. A deep fire blazed not only on my ass but also throughout every inch of me. So much shame and embarrassment flooded within that I could barely inhale. Blood rushed to my face, which added to the lightheaded feeling caused from hanging over his lap.

“Stop,” I said again, though this time with much less conviction.

Eddie volleyed several more spanks on my bottom with growing force. “Tell me to stop again,” he nearly growled.

I should have heeded his taunt and said nothing more, but as I was finding out, I wasn’t exactly making the wisest decisions of late or I wouldn’t be here in Eddie Vasco’s car at his complete mercy. “You can’t do this to me.”

“I can,” he said as he continued on with the spanking, one painful swat after another. “And I will. You think you know me because you have pictures of me all over your wall.” The stinging blows never ceased as he spoke. “But you have no idea. You’ll soon get a very intimate glimpse into the kind of man I truly am. And your first lesson’s right now. If you don’t follow my orders, there’ll be consequences.” He spanked even harder on the sensitive flesh where my ass met my thighs. “This little spanking will be nothing compared to what I’ll do to you. So, I advise you to tread lightly and do exactly as you’re told. This is a warning. A small and easy warning.”

This was far from easy, and I couldn’t imagine how much harder this could get.

I bit my tongue and didn’t say another word in hopes that the punishment would soon come to an end. But I couldn’t hold back the gasps and whimpers that escaped through my lips with every searing swat to my flesh. It hurt! It fucking hurt more than I thought a spanking could! Eddie’s hand felt as if it suddenly had morphed into a solid piece of wood.

Eddie positioned my legs so they were spread as far apart as possible in the position I was in. He then began to spank my inner thighs, dangerously close to my exposed pussy. I held my breath each time his fingertips grazed the delicate, intimate flesh. His slaps on my inner leg weren’t as hard as he had been spanking on my butt, but the sting was far worse. The cool air on my moistened sex heated my face. I wanted to scream, cry, shout out in disgust, but the shame and humiliation was so much that all I could do was muffle every noise that wanted to come from within.

Maybe if I lay perfectly still and remained completely quiet, Eddie would stop the assault.

But Eddie had other plans than a simple cease and desist.

I should have known he wouldn’t avoid my spread and susceptible pussy.

You could hear the wetness of my flesh against the fingertips of Eddie’s hand. The sound filled me with the ultimate mortification, and I knew there was no way that Eddie would miss my body’s reaction to his force.

He didn’t say anything—which I hadn’t expected—but instead spanked me a few more times on the lips of my pussy.

Jesus. Could the driver hear the sound of a hand smacking wet skin?

If Eddie didn’t kill me and put me out of my misery, the embarrassment surely would.

Finally, the pussy spanking stopped, but it was replaced with Eddie shoving a finger inside of me.

“Don’t,” I moaned, though anyone listening wouldn’t have believed I wanted it to stop.

“Have you not learned?” Eddie asked. “You don’t tell me what to do.”

I expected the punishment to continue due to my verbal outburst, but instead, he pumped his finger in and out of my pussy. I bucked and writhed against his hand, unsure if I wanted his finger fucking to continue or for it to come to an end.

Sadly, my body decided for me as intense arousal formed with every press of his finger deep inside of me.

But my body wouldn’t listen.

Yanking out his finger just as I started to drift away in euphoric bliss, Eddie brought his hand coated with my juices to my face. “Lick it off,” he demanded.

I stared at his wet finger, musky with my scent, not certain I had heard him correctly.

He placed his finger on my lips and pressed past them. “Clean my finger.”

Not really having a choice, since his finger already rested on my tongue and I could taste the saltiness of my desire, I did as he commanded. I suckled on his finger as my pussy throbbed for more.

“That’s right. Swirl your tongue around,” he said. “Next time I’m forced to shove something inside your mouth—or your pussy—it won’t be my finger.”

A shiver ran down my spine at his threat, but I compliantly licked as I continued to suck in hopes of pleasing him.

Clearly satisfied with the cleanliness, he pulled his finger from my mouth. “Punch me again, or even strike out at me, and I’ll not use my hand. I’ll take my belt to this tight ass of yours.” He swatted each cheek harder than he had done before, causing me to cry out with each one. “Are we clear?”

When I didn’t respond right away, he swatted me again even harder. “Are. We. Clear?”

The spanking stopped, and Eddie positioned my body back to upright. The blood rushed back to my head, making me dizzier than I was before. He had freed my hands, but after what he had just done to me, he might as well have placed handcuffs on them. I wouldn’t dare try to hit the man again. He was stronger than me obviously, but he also had no scruples. I had no doubt he would do exactly as he threatened and whip me with his belt if I did so.

I reached down to pull up my panties but froze when Eddie gripped my wrist firmly.

“No. Leave them exactly where they are,” he commanded.

I almost told him to go fuck himself and pulled up my underwear regardless of what he said, but my throbbing behind—and pussy—kept my mouth shut. I had no choice but to sit back and ignore the fact that my naked and heated flesh pulsated against the leather of the seat as my panties bunched up right above my bare feet. Chills ran across every inch of my skin, contrasting with the bead of sweat that had formed on my upper lip. My heart beat so loudly that I could hear it in my ears. I had no idea what was going to happen to me, but I also could see that demanding answers was not the way to go. I had to outthink the man. I had an education very few had. My IQ could win this battle if I didn’t allow hysterics to get in the way. If Eddie Vasco wanted me dead, he would have done that the minute he forced himself through my door. He clearly wanted me for something. I just had to figure out what that was and give it to him. I wasn’t going to play hero or martyr. There was nothing that I wouldn’t tell the man. I didn’t have confidential information, which could be to his dismay, but even if I did, I would fold. I would do whatever he wanted to get the fuck out of here alive and with all my digits intact.

I squirmed in my seat, trying to alleviate the pressure. I wouldn’t dare look Eddie in the face right now, but I could have sworn that out of the corner of my eye, I saw him smirk.