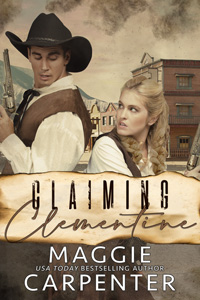 As Clementine’s voice rang through the stable he broke into a smile. She’d been gone a while, and he couldn’t wait to see her. “I’m back by the stalls!” he shouted. “Someone just came in.”

“Anyone interesting?” she asked as she walked up with Magic and Honey.

“He’s different, I’ll say that much. He looks like a city fella—but I don’t think he really is.”

“What makes you say that?”

“I’m not sure, just a feelin’. Where have you been? I hope you didn’t venture out.”

“No, I was a good girl,” she said with a grin. “I went to the top of the street and got talking to some women about what Sam had told us, and the stagecoach robbery. They knew even more. It’s fascinating. And I checked the telegraph office. There was another message from Lisa. She found my things and has them tucked away. I don’t know why she asked me where they were. I guess she was just checking to make sure I hadn’t moved them.”

“A simple explanation after all, but Clemmie,” he said softly, moving closer to her, “do you know what I think is fascinatin’?”

“Your naked body,” he whispered. “It’s the most fascinatin’ thing I’ve ever laid eyes on.”

“Teddy, you’re making me weak again,” she murmured, leaning against him.

“Good to hear. But I’m about to make you a whole lot weaker.”

His nimble fingers deftly unbuckled her gun belt, and she watched, almost spellbound, as he hung it on a hook by the stall.

“Now I’m gonna slide my hand inside these trousers and untie the ribbon holdin’ up your drawers.”

“Shush,” he warned, moving his lips to her ear as he walked her backwards. “I’ll do what I want, and you’ll do as you’re told. Lean against the wall and don’t speak.”

Though worried someone might walk in on them, she found herself swept up by his authority, and closed her eyes, relishing the unexpected, exciting moment.

“That’s better,” he muttered, pushing his hand inside her underwear. But he abruptly pulled it out. “Keep those eyes shut tight, and stay just like you are.”

She was about to say yes, Sir, but he’d told her not to speak. She felt him leave, then a moment later she heard the doors rolling and banging closed. It was late afternoon, and without them open the stable would be dark. She could imagine him striding through the dim light toward her, his cock stiff in his trousers, wanting to push inside her.

But his lips were suddenly on hers, devouring her mouth in a crushing kiss. “You’re mine, Clementine,” he said huskily, pulling back and nuzzling her neck. “That’s a rhyme I never want you to forget.”

Pushing her pants and drawers down her legs, he thrust his fingers into her womanhood, eliciting a sharp cry. As he moved them in and out of her slick channel, she moaned loudly, and couldn’t stop herself from pressing her hand against his crotch. He was rigid, and when she closed her fingers around him through his trousers, he groaned.

Suddenly, he spun her around to face the wall. Sensing him dropping his pants, she held her breath, waiting to feel his stiff shaft pressing against her, demanding entry.

“I’m gonna take you hard,” he grunted as he gripped her hips and yanked them back, “but you love it like that.”

“Yes, yes, I do,” she whimpered, lewdly wriggling her bottom. “I love it so much.”

“You need my hard cock inside you and my rough hand spankin’ your ass,” he continued, soundly slapping each cheek several times in quick succession. “I’ll redden your skin as much and as often as I want, got it?”

“Good, you’re learnin’. I’ll take you how I want as well,” he continued, his lips against her ear as he pushed his cock inside her. “I’ll fuck you here”—he thrust in and out—“and back here too.” His thumb pressed into her tight back hole.

Shocked by the unexpected intrusion, she froze, but as he kissed her neck as he stroked, she surrendered to the carnal lust rippling through her body. Moaning loudly, she moved her hips in time with his strokes, and when he pulled out his thumb and pushed in two fingers, she bucked back as if asking for more.

“That’s my good girl,” he crooned. “My cock is wet from bein’ inside you. It’s gonna make it easy goin’ in back there. Real easy, as long as you behave. You will, won’t you, Clemmie?”

“Yes, Sir,” she said breathlessly. “Whatever you want…”

He pulled one of her cheeks to the side, then placed his cock against her forbidden entrance. But in spite of her promise, she instinctively clenched. A hard slap landed on the side of her thigh.

“Take me,” he ordered. “Relax and take me. You’re gonna love it, and your climax will be real powerful, darlin’.”

She longed to please him, and the hot sting of the smack fed her determination to surrender. Sucking in a long, deep breath, she let it out, and as she sank into the moment, he entered her tight, aching hole.

“Rub your clit,” he ordered as he began to move slowly in and out.

“That’s it,” he growled. “I’m fucking you where I shouldn’t, and you love it just like I said you would.”

He increased his pace, and suddenly there was no thought, no awareness of time, nothing except his hot breath against her ear, his lewd whispered words, and his hard cock pounding her senseless.

Then it happened, with no warning or buildup. The almighty explosion shuddered through her body, making her scream so loud his hand wrapped around her mouth…