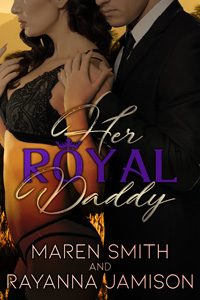 God, he was an asshole. How could I be so stupid? He’d seemed like such a breath of fresh air after Brian, but now I knew he was everything I needed to avoid.

And hot. Oh, fucking God, every damn thing about him that I hated made him even hotter and more irresistible to me than before.

He was stripping now, shrugging out of the normal, everyday shirt he was wearing, as he climbed up onto the bed after me. I wanted to shove him back and run from his room.

I also wanted to lick my way from his bulging shoulders, following the path of his hard, dark abs until I was unfastening him out of his pants with my teeth. How was I supposed to focus on all the reasons I should be furious right now when he was whipping his belt out of his pants loops, doubling it over in one hand and reaching for me with his other?

“You know what happens to baby girls who hit their daddies?” he asked, flipping me onto my stomach and planting his hand in the small of my back to keep me there. “They get hot, sore bottoms to teach them better.”

There wasn’t anywhere near enough fabric in my uniform skirt today to protect me from the bite of his belt, and yet from the first snap of leather as it wrapped the curves of my ass, it was like all this was what I had been waiting for. This was why I had chased after Mazi instead of staying with the king and doing my job. It seemed so just, so appropriate for my having slapped and then bit him on the stairs. It fit the explosive passion that had overwhelmed me at his kiss. It hurt, and yet felt good. I hated it, and yet I lay on my belly, clinging to the bedding, fighting myself not to struggle as he whipped the seat of my skirt half a dozen times before baring my bottom completely for one of the hottest, hardest, most breathtaking and yet arousing spankings of my life.

My pussy refused to differentiate between the pain of the belt, repeatedly wrapping my ass in its hugging embrace, and the pleasure it so badly wanted to feel. The pleasure I got hints of every time Mazi paused in the middle of spanking me to rub his rasping hand over my stinging flesh. He cupped, he squeezed, he didn’t seem to care at all how much noise I made when he did it. I protested, but not because I wanted it to stop. I wanted it to anything but stop, but there was something so freeing in having the need to fight stripped out of me.

I didn’t want to yield, I wanted him to make me yield and that’s exactly what he did. First with his belt, and then his caressing, squeezing hand, and finally, he grabbed a handful of the hair at the back of my scalp and whispered so hot in my ear, “How rough do you want this to get, baby girl?”

The burning need to reply “Fuck you” won out over the far more rational and fitting, “How rough can you make it?”

“You think that spanking is the only way Daddy has of punishing you?”

My eyes damn near rolled back in my head when he first nipped the lobe of my ear, then soothed the minor pain with a suckling kiss. My pussy gushed hot and wet when he straddled me. The sound of him unfastening his pants made me even wetter.

“You want to be punished by Daddy?” I heard him tear into a condom wrapper with his teeth.

Yes. God, yes. I bowed my back in a feline arch, arching back my hips and pushing my bottom up against him. His grip on my hair forced my head to the mattress, even as his other hand forced its way between my closed thighs. I’d have opened them for him, but his legs held me trapped between them.

There was nothing gentle in the way he pushed his finger up inside me. My pussy clamped onto that single digit, and my whole body cried its loss when he immediately pulled it out again. He replaced it with two fingers, shoving them in just to hear me grunt at the roughness. I bit the bedding, both hating and loving it as he finger-fucked me, hard and fast, the liquid slapping sound filling the room as he spanked my pussy with every thrust.

I shouted, my body perched right on the edge of coming when he suddenly ripped his hand away.

“You’ve been a bad baby girl,” he breathed as he wiped the wetness he’d stolen from me up into the crack of my captured ass. “You want Daddy to punish you?”

Every sexually charged nerve in my body sparked with electrified need when he touched the puckered rim of my back entrance. He worked a finger into me there next, and my toes curled so hard that the joints cracked.

I both whimpered and growled into the blankets I was biting.

He removed his finger and added spit next, smearing it across my anus and then up inside as his finger returned, working its way back up inside me. It wasn’t proper lube, but had he stopped right then to go and get some, I think I would have killed him.

“Say it,” he ordered when I moaned. Pressure. All that glorious pressure, stretching me open, slowly thrusting in and out of me in the most vulnerable and humiliating of ways.

Only I didn’t feel humiliated. Not at all. I felt captured, imprisoned between his strong thighs with my hair in his grasp. I felt wonderfully, gloriously helpless to do anything except submit.

“Say it,” he commanded, his hot breath burning the back of my neck and his voice, so husky and low that it racked me in shivers. “Say punish me, Daddy, I’ve been a bad, bad girl. Say it, or I will get up right now and leave.”

“Punish me, Daddy,” I begged. I would never survive this if he left. “Please, punish me!”

“Why?” he demanded, hungry lips nipping the back of my neck.

“I bit my daddy,” I sighed, loving the feel of it. Loving even more the slow in and out thrust of his finger working me open.

“I slapped Daddy, too.” I hid my face in the bedding, feeling more than a little bit sorry about that. I don’t know why I’d done that. I’d never been that kind of person before. When this was over, I vowed I would do everything I could never to be that person again.

“And,” he growled, low against my ear.

“I—” I hesitated, trying to remember what sin I must have forgotten. “I… I got mad?”

“You left Daddy alone for three damn days. Did you think he wouldn’t notice? That he wouldn’t miss the hell out of you?”

My breath caught. The sheer sexiness of the moment didn’t exactly vanish, but I did feel a stab of awfulness. “But… I was starting my new job.”

His hands on me stopped. I could feel the force of him studying me before, with a soft grunt, he acknowledged, “You’re right. Point well made.”

His thumb pulled all the way out of my bottom, but what I felt replace it there was much bigger. Broad and thick, slick with the lubricant of the condom it was wrapped in, and hot as hell, especially when he breathed into my ear, “Relax, baby, push back against me and relax.”

And a little uncomfortable, particularly when he got through the first rim and butted up against the second. I shouted into fistfuls of blanket, but he kept going, pushing deeper, grabbing my sore ass in both his hands to spread me open so he could watch it happen. I’d never been so humbled and so aroused all at once. I’d never felt more vulnerable, or sexy, or stretched open for the pleasure of another, never mind how weirdly painful and mortifying and fantastic it felt to me.

The old me had once locked myself in the bathroom for four hours because Brian had mentioned wanting to try anal sex. But there was a world of difference between Mazi and my old boyfriend. Brian would have hurt me and I would not have enjoyed it. I’d have lain under him, I’d have endured, but I’d have felt used in all the worst ways and I’d probably have cried for days after it was over. Mazi, on the other hand… Mazi was Daddy, and he would never hurt me. Not even with his cock fully seated in my ass and all I could feel was throbbing and thickness, I knew in my heart he would never, ever hurt me. Not for real. Not when it mattered.

His hands massaged my ass cheeks, spreading them open again and again as he held himself motionless, giving me time for that dull ache of discomfort to fade and for the full sensual bloom of arousal to rise back up and overwhelm me.

Daddy’s cock was in my ass. He was so, so hard for me. Because of me. My pussy twitched and I knew he felt it, because the heaviness of his breathing changed.

Slowly, he let go of my ass and bent back over me. I shivered when he gathered my hair up in one hand and kissed the nape of my neck.

“Have you been a bad girl?” he asked, and my pussy spasmed all over again.

His grip on my hair wouldn’t let me nod. I whispered instead, “Yes, Daddy.”

My hands became fists in the folds of the blanket. My thighs shook, but my hips were like someone else’s. They kept trying to lift up, tilt back, offer him easier access to take what he wanted. What we both wanted.

“With Daddy’s cock?” He gave a tiny thrust, a gentle prelude of what was to come.

I gasped, then moaned, helpless to do anything but try to nod again. “Yes.”

My face flamed. My pussy gushed hot and wet, needy. “In…” I couldn’t believe he was making me say it. “In my ass.”

“Say it,” he commanded, my stuttering admission amusing him.

It wasn’t a punishment, not really. What he did to me was far too hot, too sensual, too perfectly brutal in all the right ways to ever be considered a real punishment. He started hard, but slow, and by the end it was a wonder he didn’t break the bed with me. There was nothing tender or exploratory about the way our bodies came together. Skin slapped against skin as he took me, claimed me, and I gave him everything. I lost track of how many times he pulled out long enough to flip me into a different position, only to slam back into me and keep right on going. We fell off the bed and just kept fucking on the floor, on the desk, up against the wall—it didn’t matter. We came together in a blur, our bodies colliding until I couldn’t tell where he ended and I began. He was the breath I gasped in, only to scream out again each time I came.

I lost track of how many times I did that too.

Daddy had that effect on me.