More Than He Ordered by Dinah McLeod – Extended Preview 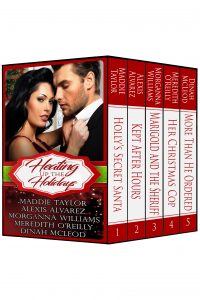 He couldn’t stand the sight of her tears. As he brushed them from her cheeks he wondered how he would be able to endure hearing her cry as he punished her. Because, as much as his heart ached for his sweet bride, he knew that she had to be made to understand. Clearly, she didn’t realize what she’d done—what could have happened. And he had to make her understand. He consoled himself with the knowledge that making her cry now would be far more bearable than ever having to live without her should her poor judgement lead to a terrible accident.

Patrick pulled her close and kissed the top of her head, allowing her to sniffle and regain control over her feelings. When she seemed to have settled down, he drew her to the bed and sat down. When she went to sit on his lap, he stopped her with a shake of his head.

“You’re still angry with me?” The question was laced with indignation and frustration in equal parts.

The plaintive cry tore at his heart. Gone was the anger, the exasperation, and in its place remained only a vulnerable little girl. He steeled himself against the sympathy he felt, determined to do what he must. She had to learn to think things through before she acted. Besides the incident with the ladder, there was also the fact that she’d been very rude and disrespectful to him just now, and she had to learn that was unacceptable.

“I understand what you’re saying. I know that it was hard for you to be alone today, and you were trying to make the most of it by cleaning the house.”

“I wanted you to be proud of me,” she murmured, ducking her head.

He could see that it had cost her a lot to admit that. His little bride could be quite prideful, it would seem. “I am proud of you for taking care of our home, but I’m not proud of the attitude that you just showed me.”

Her cheeks flushed, though whether from shame or anger, he couldn’t be sure.

“I know that you’re disappointed, too. You wanted me to love all that you’d done here. I understand that. But that doesn’t give you any right to behave toward me the way that you just did. We are husband and wife, Bella-mine. We are to show love toward each other no matter what. Do you understand me?”

She looked up, her green eyes full of tears, and nodded.

“I need to hear you say it, sweetie. Let me know that you understand.”

His cock hardened. Were there sweeter words in any language? Patrick doubted it very much. “Now, the reason I sent you to the corner in the first place was that I found you outside on a ladder, near about to break your neck.”

Bella’s brow furrowed as though she didn’t understand. “You mean when I was cleaning the windows?”

“Yes.” All amusement had vanished from his face and his mouth had drawn into a firm line once more. “That was a foolish, dangerous thing to do, Bella. What if something had happened to you?”

“Nothing happened. I was fine.”

“You didn’t look fine to me,” he insisted, an edge to his voice. “In fact, before I steadied that ladder you looked like a strong wind could have blown you off.”

She opened her mouth to object, but realized that he wasn’t going to budge. She didn’t want to argue anymore. Besides which, he was probably right. “I’m sorry, Patrick. I wasn’t thinking about that, I only wanted the windows cleaned before you came home.”

“I appreciate the thought, but I don’t care about the state of the windows! Having my wife safe and whole for me to return to, however, is something I care about very much.”

Bella smiled at him, fully understanding now, and touched by his concern. She was lucky to have such a loving husband. “It will not happen again, I promise. Not even if your windows are so dirty you can’t tell if the sun is out.” She laughed.

His expression remained somber, making her own smile fade. “Is there something wrong, Patrick?”

“I am afraid that even though we have come to an understanding, I still have to punish you.”

Her stomach balled into an anxious knot. “But, I said I was sorry!”

“I aim to give you a reason to keep that promise.”

“I appreciate that, but I’m afraid that I have to spank you just the same.” He tightened his grip on her wrist, just in case she got it in her head to run. “Now, because you’ve never done this before, I’m going to walk you through it. First, I am going to lay you across my lap.” As soon as he’d finished speaking, he pulled her across his knees. Isabella gasped, but offered no protest. “Now, I am going to get your bottom nice and bare.” He lifted her black woolen skirt, then pulled down the drawers she wore. “And now, I am going to spank you.”

Isabella could instinctively feel when he raised his hand, and she twisted around to look at him, shocked that he would so willingly strike her, even if it was only on her behind. Her eyes wide, her lip trembling, she waited.

Nothing could have prepared her for what it felt like when his hand fell. It landed with a crack followed by a stinging line of pain that took her breath away. Isabella went to sit up, but his hand pressed against her back and kept her where he wanted her. She looked back at him as if to say, what? We’re not done?

His hand came cracking down again, answering her unasked question. No, apparently they weren’t done. His hand bounced to her right cheek, back to the left, leaving a stingy fire in its wake. By the fifth spank, her shock dissipated, giving way to her need to make her displeasure clear.

“You do not get to say when this stops,” he informed her, speaking just as calmly as he always did.

As his big, hard hand came crashing down on her poor bottom once more, she cried out, her scream filled with pain and frustration. But he’d meant what he said, and he didn’t let up. After another round of blistering swats, Isabella burst into tears.

At first, she just felt sorry for herself, and for her poor spanked bottom that had never done anything to big, mean Patrick. But as she sobbed out her frustration, she began to think about what he’d said. The truth was, she had spoken to him disrespectfully. And he’d done nothing but be kind to her. Even now, she could tell that he was not spanking with his full strength. He wasn’t trying to hurt her, but to teach her a lesson, just as he’d said.

And, loath as she was to admit it, she’d earned every wallop. Ever since she’d stepped off that ship, Patrick had done nothing but protect and provide for her. Surely she couldn’t have been what he’d been expecting, especially with Peta in tow, but he’d kept his word and married her anyway. And not reluctantly, as a man merely doing his duty, but as man who’d thrown himself wholeheartedly into marriage.

What had she done to repay his kindness? She’d griped and tried to guilt trip him for needing to go into town for work after she’d had his undivided attention for a week. Then he’d come home, and instead of listening to what he had to say, rather than trying to understand where he was coming from, she’d railed at him like a cantankerous wife. At this rate, he’d never want to be home.

The thought made her tears come faster. His hand was rising and falling quickly, each impact jarring her. But she was surrendered to it now, enduring each punishing swat the best as she could. She’d also stopped begging. The only sound in the room was that of his hand hitting her cheeks and her responding wails.

And just as suddenly as it began, it stopped. Instead of his hand chastising her, it was on her shoulder, its presence strong and comforting. He waited patiently until she had calmed down. When the tears had abated and she’d finally caught her breath, he helped her to sit up.

“Ow,” she protested weakly as her sore, hot bottom pressed into his hard thigh.

She leaned into him, relieved that now that it was done they could return to normal. “Patrick…”

Her heart warmed at the gentleness in his voice, at the loving endearment. “I’m sorry I shouted at you.”

“Are you?” He tilted her head up so that he could stare into her eyes.

She nodded, tears pooling once more as she looked at him. It was odd—she hadn’t realized until just this moment how much she’d come to care for him. It was peculiar indeed that it took a throbbing bottom and him, smiling down at her even though she’d yelled at him mere minutes ago, to come to that realization. But it warmed her from the inside out.

“Thank you for that, little one.” He bent his head and pressed a kiss on the tip of her nose. “I don’t like punishing you, I hope you know that. I do like seeing your cute little bottom turn red, but I hate hearing you cry.”

Hearing him mention her butt made her wonder how she’d looked to him, bare-assed and squirming over his knee. She flushed red at the thought.

Avoiding his gaze, she nodded.

“It makes it more fun to tease you,” he admitted. “Hopefully next time I bare your bottom it can be for a more playful spanking.”

“Unfortunately, that will have to wait until another day. We’re still not through here.”

Bella lifted her head, her question etched in her furrowed brow.

“Remember that discussion we had about your attitude?”

Without warning, his hand came down on her still bared bottom, cutting off her protest. Renewed pain shot through her already tender backside.

“I should hope so. You know, for a little girl who assures me that she has learned her lesson, you’re arguing with me once again.”

Still scowling, she didn’t open her mouth again, even though she was sorely tempted.

Patrick waited a long moment, then smiled at her. “Good girl.” He leaned over to kiss her, but she took a step back.

She couldn’t believe that he was being so mean! He’d just spanked her, and the first spanking of her life, too! And now he wanted to do it all over again before so much as an hour had passed! If he thought he could get another kiss after that announcement, he was very much mistaken!

He let out a sigh. “Very well then. Have things your way. Over my knee, my naughty bride.”

Already sniffling, she obeyed. Back over his knee, he made quick work of reducing her to tears. Her bottom was still warm and sore, and it didn’t take long for his hard hand to re-flame the fire he’d stoked earlier.

“Are we done?” she asked, chin trembling when he stopped.

“Keep your words sweet and think things through, and you’ll never have anything to worry about from me,” he assured her. “I try to be an understanding husband. And as such, since your bottom is sore, I understand if you’d rather not make love tonight.”

Bella’s cheeks flushed scarlet but she surprised them both by saying, “Perhaps I could be on top.”