On His Naughty List by Shelly Douglas – Extended Preview 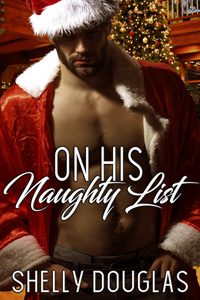 From behind the hotel desk, Ashley watched the steel-jawed Santa place his white-gloved hands on the arms of the large chair before pulling himself to a full commanding height of six foot two. He was taking long determined strides toward her, and it was becoming crystal clear that he was not pleased. At all.

“Come with me, right now,” he said, curling a finger in her direction.

As she angled her head, loud, ill-tempered words spilled from her mouth that could not be retracted. “For God’s sake, we were just having a conversation!”

“My choice in photographers is not up for debate.” His lips formed a grim line as he tilted his head, mirroring hers. “And just to be clear, your conversation sounded more like an interrogation. Which I specifically asked you not to do. Do you have any recollection of that discussion?”

Straightening her shoulders, she was about to defend herself. But after meeting his unsettling, intense gaze, she decided to remain silent.

“Well, are you at least in agreement that we need to have a private conversation about this?”

Her arms reached for the curves of her hips. “Do we have to do that now? I just started my shift at the desk.”

“Would you rather we have our dialogue right here in the lobby? In front of everyone?”

“No, I’m coming, Santa,” she said facetiously before throwing a quick eye to the blonde girl on her left. “I’ll only be gone for a few minutes, Stacey. Can you cover for me?”

Her coworker’s smile was crooked as she checked out Andy’s impatient body language. “Sure. I know he’s your boyfriend, but what did you do? I’ve never seen Santa look so angry.”

Through stern narrowed eyes, Andy watched Ashley exit through the back-office door before she came out to stand in front of him. With swift dexterity, he took her by the wrist and glanced around the spacious room, before tugging her toward the bank of elevators. “We need some privacy. Let’s go upstairs to my room.”

She felt as though her feet barely touched the smooth black and white tiled floor as he hurried her petite body across the lobby, heading toward the lineup of elevators before entering the first one that opened. Nervously, she stepped to the back of the large enclosure and watched him push the shiny metal button. Until that second, she hadn’t really given much thought to his previous threat of a spanking, but as the heavy silver doors closed, her backside trembled as she watched him stand with his arms crossed.

Jesus. He’s staring at me like I’m his disobedient child.

When their elevator reached its destination and the automatic door opened, there was a deafening silence as Andy politely gestured with his large hand for her to exit. Then he took her by the wrist again and quickly ushered her down the long hall to his room.

God. I’ve never seen him this fired up before!

After inserting a plastic key in the slot to unlock the door, he waited for the light to turn green before glancing over his shoulder. “Go inside and stand next to the foot of my bed.”

There was something about the way his thick eyebrows drew together tightly, combined with his low guttural command that made her pussy spasm with nervous excitement. “W-Why are we doing this now? Won’t a group of kids be waiting in line to give you their Christmas list?”

He sat down on the mattress, grasped Ashley’s hand, and pulled her toward his muscular body before staring her straight in the eye. “First, we’re going to have a discussion, and then I’m going to turn that pretty backside of yours over my knee.”

“You can’t be serious.” She folded her arms and tapped an anxious foot. “In case you’ve forgotten, we already had a conversation, downstairs. In front of Detective Neilly and the entire desk staff.”

Andy’s growl was deep before his voice resonated in the large room. “Yes, we did, but I wasn’t anywhere near finished making my point.”

It was becoming clear to Ashley that she was about a minute away from her first real spanking, and though she wasn’t sure how to process the inevitable, an aggressive side of her personality continued to egg him on anyway. “Well, what is your point, Mr. Claus?”

Her eyes widened as she watched him take off his velvety white gloves before carefully removing his wig and fake beard. “This is the second time we’ve talked about this. My methods of tracking down a perp might be old school, but I’ve been in this business of catching criminals for almost twenty years, and I’m not about to change my process to suit your taste.”

“I wasn’t trying to usurp your authority…”

“This isn’t about my ego, young lady. I lost someone close to me last year who also wanted to commandeer my command. It’s why all squad members are given explicit rules to follow. Do you understand?”

Did he just call me young lady?

She tried to make a quick escape, but he managed to intertwine his leg around hers, trapping her in his solid hold. “Behave yourself, missy, and take your spanking like a big girl.”

“Are you crazy? For God’s sake! What do you think you’re doing? I’m a grown woman with a respectable career, not a child…”

“Yes, I’m well aware of your age, and your credentials are outstanding,” he added with a calm nonchalance, bending her waist over his lap. “But I promised to spank your bare hind end the next time you disobeyed me, and you’re about to find out the hard way that I don’t back out on my promises.”

Her face blushed a bright shade of crimson as she struggled in his firm grasp, wriggling and jerking over the soft black cotton fabric covering the stiff slabs of his thighs. But he curved his fingers under the waistband of her khaki pants and in one agile movement, tugged them down to her knees, taking her white panties along for the ride. “Jesus Christ. Are you crazy? Let me go. Please let me go!” she pleaded and yelped.

But he held onto her waist with unyielding determination. “Be still,” he scolded through a grim expression, landing a well-placed swat onto each buttock. “Maybe this will refresh your memory that I’m the one responsible for this investigation,” he continued, his heavy hand bouncing from one tender side to the other, painting her hind cheeks a uniform shade of lipstick red. “And if you want to remain on my team, you will follow my instructions. Is that clear?”

“That is not the preferred answer, Detective Scott,” he firmly chastised in a low gravelly voice before his open palm landed another sharp smack to her fluttering behind. The sight of her red ass had his aching cock practically bulging out of his pants, but just as he began kneading her blazing buttocks, Ashley caught her second wind and bowed her back, trying to break away from his strong grip.

“Stop that,” he warned, repositioning her hips over his lap, locking his athletic leg over hers. His tone was stern as he watched her full, rounded globes wiggle with each swift smack. She craned her neck to look up at him, her icy blue eyes pooled with obvious tears of humiliation as she shimmied and writhed trying to get free, but determined to keep her in place, he tucked her even closer with one hand and continued to smack her reddened rump with the other.

“Please! I’ll follow the rules from now on. I promise!” she shrieked, thrashing about while managing to display her glistening wet sex in the process.

“All right, all right,” he soothed, massaging her red-hot flesh while glancing downward to catch a satisfying glimpse of her slick, needy pussy lips. As she stopped sobbing and her breathing slowed to a normal pace, he effortlessly flipped her body and pulled her up onto his lap.

“My girl has never received discipline like that before, has she?” he whispered, running thick fingers through her short, dark layered hair.

Ashley’s wet eyes closed, her face glowing with a blend of desire and embarrassment. On one hand, she wanted to crawl into a black hole after the humiliation of her bare bottom being spanked by her handsome lieutenant, but at the same time, she loved that he considered her his girl. “I’ve only been given a few sexy swats on my backside as a warning. And if you remember correctly, it was your firm palm that administered them, Santa.”

“Mmm-hmm. But that didn’t seem to be enough. I think my disobedient little miss has been needing a good hard spanking from someone who truly cares about her,” he said firmly, folding her head under his chin. “Someone who will watch over her and keep her safe.”

A streak of heat crept up her neck. “Do you really want to be that someone?”

His demeanor was gentle and inviting as he lifted her chin. “Haven’t I already told you that you’re my girl?”

Just hearing his answer caused her lips to curl into a mischievous smile and her pussy clenched with desire. “Lots of men say it, but they don’t really mean it,” she whispered.

While shifting her into another position, his mirrored grin turned lopsided as he gazed down at the small wet stain of her arousal on his rented black suit pants. “Well, I’m a man of my word. But I’m also a man that has an abundance of rules—in and outside of work. Do you think you might want someone like me in your life? A boyfriend who will punish your naughty behind when you deliberately disobey him?”

After inhaling a rush of air, she finally managed a soft, “I do.”

He kissed her tearstained cheek before shifting his weight from side to side, obviously attempting to readjust the throbbing ache between his legs. “So how does it feel to have someone care enough to discipline you?”

“My bottom is on fire, but the cuddle is out of this world,” she said, eyeing the bulge practically bursting out of his zipper.

“I guess it’s not a secret that I’m going to need a cold shower before going back to the lobby. So, while I head into the bathroom, I’d like you to walk that gorgeous red ass of yours across the room and stick your beautiful nose in the corner.”

She traced the length of his hard cock with her short fingernail. “Come on, Santa. Instead of standing like a naughty girl against the wall, I could join you in the shower and take care of all your needs.”

His eyebrows knitted together as he removed her hand from his bulging erection. “Oh, I’m sure you could. But I think it would be in your best interest to behave yourself, missy. We both have work to do.”

After she wriggled off his lap and walked across the room, her hands flew back to rub out the sting from her bare reddened cheeks.

“Ah, ah, ah,” he corrected in a stern voice. “The only one who’ll rub that naughty bottom after a good hard spanking will be me. Is that clear, Detective?”

“Crystal,” she said, locking her fingers together behind her waist.