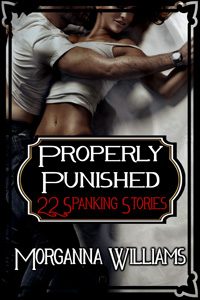 She took a deep breath and knocked on the door, her bottom already clenching reflexively. She was in big trouble… he’d promised her a thorough punishment to get his point across and her poor ass knew what was coming.

Jack opened the door and looked down at her, and her tummy flipped in response. “Skyler.”

“Hi.” She blushed when her voice squeaked.

For crying out loud, Skyler Jones, you’re a forty-year-old woman. One frown shouldn’t make you squeak like a fifteen-year-old caught with her daddy’s cigarettes, she scolded herself internally as she ducked under Jack’s arm and walked into the house.

“I don’t think we need to talk about much, do we, little girl? Pretty much covered it the last time we talked, didn’t we?” he asked.

Skyler fidgeted in front of him. “Yes, sir.”

“Then I want you to strip,” Jack commanded.

“Your heard me,” he said sternly.

Her heart began to beat rapidly as her face grew more and more flushed; usually he waited till they were in the bedroom. “In the entrance hall?”

“Now, Skyler.” His tone brooked no argument and Skyler immediately pulled her panties and leggings off, then kicked her sandals away; as she did, her long shirt came over her head to join the pile. Under Jack’s gaze, she unfastened her bra and tossed it with the rest of her clothes. It was embarrassing to be standing completely naked in his hall; she would have to walk through the living room past several open windows to get to the bedroom.

“Pick up your clothes and take them in the living room, while I get the ginger from the kitchen. I expect to find them neatly folded on the couch and you bent over the edge of the bed when I come out of the kitchen,” Jack instructed as he walked through the living room to the kitchen.

Skyler moved swiftly, scooping up her clothes and standing in front of the couch and all the windows facing Jack’s back yard as she neatly folded her clothing. She’d never felt so exposed in her life.

Once she was finished, she hurried to the bedroom and buried her face in his comforter; she was bent over the edge of his bed waiting for her punishment.

“Good girl,” he said softly as he entered the room and she breathed a sigh of relief. Everything would be okay; Jack was going to punish her but she was still his good girl.

“Arch your back and spread those legs wide, little girl,” he said firmly.

She did as he commanded and immediately felt the press of the big plug of ginger at the slick entrance of her vagina. “What?”

“I thought I’d lube it up for you first,” he said, and she could hear the grin in his voice. Then he sank it deep inside her and began working it in and out of her heated core.

Skyler moaned loudly as he rocked it in and out of her hard and fast; it felt good even as it began to burn. Just as her hips began to press back with every forward thrust, he pulled it free and pressed the now very slick root to her puckered anus.

“Deep breath and exhale,” Jack told her as he began to work it inside her.

“Oooohhhh!” she cried, trying to make herself press back as it stretched her open and invaded her ass. Jack started the same in-and-out thrusts that had felt so good in her core and now made her go up on her toes in an effort to evade the evil little root.

But there was no chance she could escape it. It drove in and out of her ass hard and fast, making her whimper and moan as the burn began to grow, then he twisted it and seated it inside her.

Skyler stood and faced him with the root planted firmly then sank to the pillows in front of him on her knees while he unfastened his pants and pulled out his fully engorged cock.

She was equal parts desire and trepidation, embarrassed by the arousal slicking her thighs, as she leaned forward and took hold of his cock, licking all around the head.

Engulfing the head of his cock in her mouth, Skyler began to suck hard while swirling her tongue beneath it. He allowed this for a minute, groaning his appreciation, then taking her hair firmly in his hands, he thrust hard into her mouth. She barely managed not to gag as he began to take her mouth hard, going deeper with every thrust.

When the head of his cock forced its way into her throat, she gagged reflexively, tears running from her eyes, but he held her fast, continuing to thrust when she would have pulled free. “Suck… suck… yes, that’s what I want to feel… suck…”

He pulled all the way out just when she was at her limit. “Stroke me while you take a break and breathe… breathe, Skyler… deep breaths.”

She took in a gasp of air in response to his command, breathing deeply as she squeezed his cock and worked her hand up and down it.

“Yes, sir,” she said softly, feeling submissive to her core.

“Back on it then,” he ordered. Skyler took him back in her mouth, sucking for all she was worth. This time, though he was thrusting just as hard, it seemed easier until he got close to coming. Then she started gagging again.

“Stay with it… keep sucking… I’m coming, stay on it!” He held her fast when she would have pulled away and she swallowed every drop as he came down her throat.

Skyler came off his cock gulping air, looking up at him as she caught her breath. “Lick me clean.”

“Good girl, back in position.”

Getting up from her knees, Skyler bent back over the edge of the bed. She groaned when he firmly grabbed the end of the ginger and began working it in and out of her again, twisting it periodically to increase the burn and the pressure in her ass.

“Are you going to be my good girl now?” Jack asked.

Once more he seated the plug, sending burning fire throughout her back passage, then she heard the sound of his belt clearing his pants.

The belt fell hard and fast on the under curve of her bottom, leaving a line a fire in its wake that rivaled the one inside her ass. Again and again it fell until not an inch of her backside was left untouched, as he worked the belt up and down her bottom and back up again.

Skyler cried softly into the bedding, then the belt dropped to the floor and the ginger was pulled almost all the way out and then thrust in again before it made its final exit.

“I’m sure you are, Skyler. Now reach back and spread those ass cheeks wide for me,” Jack told her.

With a little sniff, she did as he told her, catching a raw ass cheek in each hand and spreading herself wide. It was mortifying; he could see everything from her wet glistening lips to her swollen tender asshole.

She gasped when she felt the press of his cock on that already sore orifice; she clenched involuntarily, but he would not be denied. “Ooohh, Jack!”

“What happens to naughty little girls, Skyler?” he asked as he pressed his cock deeper and deeper into her burning little hole.

“Naughty girls take it up the ass!” she yelled as he made it all the way inside and she felt his balls pressing tight against her ass.

“That’s right, naughty girls get it up the ass hard,” Jack told her as he began to thrust in and out of her ass in a punishing rhythm.

She moaned as she quickly became overwhelmed by the combination of pleasure and pain; Skyler frowned when he suddenly withdrew, disappointed by the loss of his cock.

“Flip over on your back,” he said firmly.

Skyler flipped to her back, looking up at him curiously. “What?”

“I want to watch your face while I take your ass,” he told her. Spreading her legs wide and pushing them back, he thrust back inside her tight bottom hole.

She gasped as he began pounding in and out once more, the new angle reawakening the sting as he stretched her tender hole open for his use.

“Spread your lips open for me,” Jack ordered, after a particularly hard thrust.

“Don’t ask me why, do as you’re told or I’ll spank those pretty lips bright red before I spank your naughty little clit,” he told her matter-of-factly.

She reached down and spread her nether lips, holding them wide, feeling partly mortified at his unrestricted view and partly excited.

Then he snapped a tiny little paddle down on her clit and her back arched as she yelped. He was still pounding in and out of her ass hard and fast and the combination of that with the clit spanking was overwhelming her senses.

“What do you say when I give you clear instructions, Skyler?” he asked as he delivered another stinging spank with the clit paddle.

“Yes, sir! I say yes, sir!” she cried as the little paddle fell again and again until she began to shiver as the pain morphed into some of the most intense pleasure she’d ever known.

Jack followed her over the edge with a muffled shout, leaning down and sucking deeply on one of her nipples as he came.

His big body enveloped hers for a moment as they both came back down to earth. She loved the feel of him on top of her and around her; she felt safe and protected from the outside world.

Every time she shifted in her seat tomorrow with a wince, she’d remember this feeling and smile.