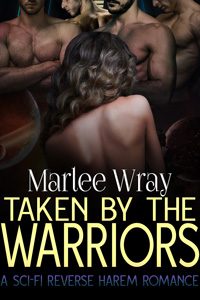 Falise looked up at Darx, who was filling the entryway of Detrey’s chamber so she couldn’t leave. “But maybe I want to go shopping on the outpost,” she said with a pout. Her heart thumped hard in her chest. She did want to see the outpost. But another part of her wanted to be alone on the ship with these warriors after the princess and Jecka had gotten off… to see what would happen.

It didn’t seem to matter what she wanted. The decision was being made for her.

“She doesn’t want to come?” Princess Lana asked suspiciously, from somewhere in the hall. “She usually assists me at dress fittings. Falise?” she called.

Darx jerked her to him and said in his low growl, “Be good or rough punishment later.”

“I’d rather stay!” she called back to the princess.

Moments ticked by, and the voices in the hall faded.

“What are you going to do?” she asked, nervously biting her lip.

Darx stepped aside, and Detrey and Conklin entered the room. Darx shoved her, so she fell face down on the bed. A second later her panties were pulled off. She squirmed. Her bare bottom had been exposed before, but this felt different.

“Wait. Can we talk about this?” she asked as Det put a hand on the back of her neck just at the base, pressing her chest into the mattress and making her helpless.

“You promised to come back yesterday and didn’t,” Conklin said.

A strap whistled through the air just before it snapped against her backside. Her flesh sprang back after the blow and then clenched at the sting. Darx was near the bed, his thick cock jutting upward, excited to see her naked and whipped. He was such a monster.

“No!” she screamed, struggling. “I just forgot! I was looking at pictures of your pretty homeland and—ow!”

A thumping smack to her bottom came from Detrey. “Keep that luscious ass in position. Or should we tie you down?”

The strap landed at the tenderest part of her buttocks right where it met her thighs. She shrieked, but also rubbed her body against the linens. Inside her, the pain seemed to simmer into need.

The strap came down several times more, leaving what she was sure would be bright red stripes.

“Stop it,” she said, putting her hands back to shield herself. When nothing happened, she looked over her shoulder to see Conklin had stopped. He moved aside, shaking his head at her.

Darx lowered his hulking frame next to her, then dragged her across his lap. She fought to get free, but it was useless. The strap was used to bind her arms out of the way. She screamed her protests.

Then Darx’s huge hand slammed down against her defenseless buttocks. Her bottom was a ball of fire in no time with each blow rippling through her and into her pussy. He squeezed each flaming cheek, and she writhed in a desperate storm of pain and pleasure.

She could feel his hard cock against her soft middle. As she sobbed, he reached between her legs and stroked her soaking pussy. Her hips pumped helplessly, tears dripping endlessly from her eyes onto the floor. Then an orgasm took hold, and she was left shuddering and humiliated at how wanton she was under their power.

Darx moved her onto the bed, and they turned her over. Detrey and Darx each hooked the back of a knee and pulled her legs up and open. Then their mouths closed over her breasts. Conklin gripped her scalded globes and feasted on her pussy, which was laid open by her spread legs. It overwhelmed her; they’d not given the aftershocks of her earlier pleasure time to completely recede before forcing her body to new heights of arousal. She writhed and halfheartedly tried to escape the strong hands that held her in place.

Conklin’s tongue probed, pressing against her innocence. They still hadn’t fucked her in her little pussy hole. She knew it wasn’t because they didn’t plan to. They just hadn’t decided who would be the first yet. Once they did, she knew there would be no chance of keeping them out of her all the time.

She arched and wailed as she came again fiercely. Everything they did was rough, so why did it make her come so hard?

“I want these tits in milk,” Detrey said. “She needs a baby in her belly.”

“No!” Unsure of what might occur on a strange world, Falise had taken a brew to prevent pregnancy, but she didn’t trust it against the seed of three or four warriors, and the effect may have worn off anyway.

“Mmm. There was a whore in Candisha that we milked,” Det said with a dark smile before he caught her chin in his hand and kissed her, pushing his tongue deep in her mouth.

“I love this body,” Conklin said, nipping her pussy lips.

She strained and arched.

“I wish I’d been with you in Candisha,” he said. Conklin was the youngest and had just come of age to be a traveler warrior.

“Not all of Candisha,” Falise said, fighting the way their hands restrained her. “Sir!”

Darx let her go and walked out. Her head snapped to the side, watching the entryway warily. She had been able to negotiate with Detrey and Conklin in the past, but Darx never listened to her. He only let her escape if the other men suggested it.

When he returned he tossed a bottle to Detrey. “Make her drink it,” he said in Ketturan.

They let her go and sat her up.

“What is it?” she sniffled.

“Be a good girl,” Detrey said.

She sniffed it. The odor was tangy, like fruit mixed with spices. She tested it and nodded. It was infused with something sweet. She was thirsty and gulped it down, knowing she might regret it. Were they drugging her so she wouldn’t scream as loudly? Her backside still throbbed from Darx’s hand.

She shivered. “Don’t be so rough.”

“I don’t,” she said, but that wasn’t completely true.

“The next part won’t be rough. Just uncomfortable,” Detrey said in a soothing voice that she knew better than to trust.

Darx dumped a box on the bed. A hose and nozzle tumbled out, along with a pair of jugs and a tube of grease.

“No!” she snapped, trying to jump off the bed.

Detrey’s hand clutching a fistful of her hair stopped her.

“No!” she exclaimed, trying to pull his fingers loose.

“We decided that I would decide if I wanted to!”

“What is that?” Conklin asked, his voice curious and laced with excitement.

“To clean her out for serious ass play. Lie down on your belly, pet,” Det said.

“No,” she said, thrusting her lip out in a pout as she looked up at Darx. She knew who was behind this.

“To clean—you mean it goes into her?” Conklin asked, staring at the nozzle. “Fuck.”

“Go if you don’t want to watch,” Detrey asked.

“You may need me if she decides to fight.”

“She may fight a little at first, but she won’t after that,” Detrey said. “She won’t want things to get messy.”

“Stop talking! Stop!” Her belly cramped, and she shoved her fist against it. Whatever they’d given her to drink was part of this.

“Be a good girl. Lie down,” Detrey said, like she was the naughty one instead of them.

Tears filled her eyes. “I hate you!” she said, so overwhelmed she thought she would sob again.

She clenched her cheeks, but Conklin the traitor pried them open. She screamed and kicked her feet as she felt cool jelly coat the crevice and her little hole. Seconds later, the ring tingled and burned, and her pussy juiced.

“What? What’s happening?” she gasped.

She wanted to resist, to scream and scratch, but her bottom hole and everything surrounding it wanted something else. She panted, raising her butt, like a wanton little whore. Her cheeks flamed.

A cold lubricated nozzle pushed into her. She struggled and whimpered at the pinching intrusion.

“Yes,” Detrey said with a smirk. “And it’s just the beginning. Pour.”

Cool fluid rushed into her. The sensation was strange, but not painful. The liquid sloshed deeper. After several moments, her stomach swelled. Then eventually, with more, she became overly full.

“That’s enough! No more,” she begged.

She did so as he removed the nozzle.

Sweat popped out on her forehead as cramps rolled through her.

“Pet her. She’s a good girl,” Detrey said, putting her on her side.

Conklin rubbed her breasts and belly, licking and teasing her. There were too many sensations at once. She cried weakly.

“It’s hurting my stomach,” she said when the cramps worsened.

“Let’s get a drink,” Detrey said to Conklin, and they left her alone with Darx.

“I’ll be sick,” she whimpered.

Darx picked her up and carried her to the bath cavern. He set her down gently and walked out.

For several moments it felt like her insides had turned themselves inside out. After she finished, she washed herself thoroughly, then sat weakly on the floor of the shower under the warm water.

Darx returned and held out a glass with a only a little liquid. “Now this.”

She knocked it from his hand, splashing the contents down the drain.

“That was to settle your belly.”

“You will,” he said evenly.

She felt a little dread. She looked up through strands of wet hair. “Is there more of it?”

“I’ll drink it,” she whispered.

He left and when he returned, he brought her another small glass. She drank the fresh citrusy mix. At first it made her want to be sick, but then all the roiling and cramps eased and disappeared, and she felt normal again.

“You are a wretched monster,” she said.

“Yes,” he said with a dark smirk. He held out a big hand.

“If I tell my princess about this, she will poison you to death.”

“You won’t tell her,” he said confidently.

She glared at him, knowing he was right, and put her hand in his. He pulled her out of the cavern, bending to smell her hair and neck. They all did that, like they could inhale her into their chests. She didn’t understand why. When she sniffed her own skin, it only ever smelled normal.

“What do you smell?” she asked, glancing at the hard length straining against his skin pants.

“The best thing there is. Girl.”

She rolled her eyes.

He swung her up into his arms and carried her to the galley.

“Now we tie you down and use your tight pink hole.”