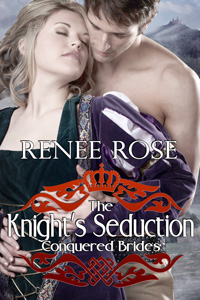 “Do you know what will happen if you try to escape me today?” he asked, reaching out and patting her bottom with the crop.

“I won’t,” she said, turning away dismissively.

He swung the crop and caught the underside of her bottom, making her leap forward and grab her bottom.

“I said, I wouldn’t,” she exclaimed, turning around and glaring.

He caught her up in his arms, joining her hands in rubbing away the sting. “Do not glare at me. If I think you need a taste of my whip to remind you to behave, I will use it.”

“You,” she said furiously, attempting to push him away.

“This little bottom is mine,” he said, squeezing it possessively. “Mine to punish or pleasure as I see fit. Do you need another reminder before we go?”

Pride warred with practicality in her expression and he hoped she would test him again, but she shook her head. “No, sir.”

He smiled and touched her nose. “Smart girl.” He offered his arm. “Shall we?”

She took his arm and they walked out to the stables where Penrod had already saddled his destrier and a pretty roan for Daisy. She stroked the mare, introducing herself and speaking softly in the manner of someone well-accustomed to horses. He helped her into the saddle, then mounted his own stallion and led the way out of the castle gates and into the forest.

The day was quiet. A light dusting of snow had fallen during the night, making everything look clean and white, the snow catching the sunlight and sparkling. They rode side by side, following a path through the trees.

He smiled, enjoying her happiness.

She turned to him. “Thank you so much for taking me out today,” she said. “I can’t stand being cooped up inside.”

“You don’t mind having a wife who prefers to act like a man?”

He bit back a laugh. “Little Daisy, you are nothing like a man. And no, I meant it when I said it was my fortune to have a wife who likes to hunt, for now we have something we can do together.” He gave her a wink.

She looked at him doubtfully. “I think everyone at Rothburg will pity you for your poor choice in wives.”

“Enough,” he said. “Rothburg will accept you, just as you shall accept her. Do not fret over it.”

She didn’t answer, but within a few moments looked content again, taking in the scenery. They saw a buck and she had her arrow fit to her bow before he did, but his horse stepped on a stick and the buck startled and ran.

They rode for over an hour before they stopped to rest. He helped her from the horse, catching her waist and guiding her along his body as he lowered her, until she landed at his feet, her slender form pressed against his.

He expected her to protest, but she looked up at him expectantly. He bent and caught her lips, tasting her sweetness. When she returned the kiss, he went rock hard. Grasping the back of her head, he took her mouth more insistently, licking into her lips.

She gasped, pulling away from Barrett, a bit frightened by his invasion. He abandoned her mouth, kissing down her neck, nipping at the place it met her shoulder. He slipped his hand inside her cloak, cupping her breast and squeezing it.

Her legs grew weak. He pulled open the laces of her gown, baring her nipple to the cold air, where it stood up in a hardened point. He flicked his tongue over it and she groaned, the contrast of warm to cold making it burn. “What are you doing?” she croaked.

“What do you think I’m doing?” he murmured, grasping her bottom with one hand and pulling her even closer.

He had her completely off-balance. If he released her, she would fall backward onto the ground. She clung to his arms, giving up maintaining herself apart from him. Barrett would never let her fall—she knew it instinctively, even though it cost her to give up her own independence. She let go, stopped trying to keep her toes balanced on the slippery ground and relaxed into him, letting his strength bear her weight.

He picked her up, pulling her legs to straddle his waist, and carried her to a fallen log, which he brushed off and sat upon. “You know what I think?” he asked, his voice low and seductive.

“I think if you tried sex in some new and fresh position, you wouldn’t even know we were coupling. Like this one for instance.” He yanked her hips closer to his body and she realized her sex lay just above his manhood.

She attempted to push back, but he held her close, gripping her bottom with both hands and grinding her quim against the bulge in his leggings. “Barrett,” she cried, bringing her fist down on his shoulder.

“Don’t be naughty or I will have to warm your bottom for you,” he warned.

A shivering had begun in her sex and spread down her legs, making her toes scrunch up in her boots. Moisture had begun to pool again. She wondered: what would the harm be in trying it this way? He was right; nothing about the position or the feeling in her body reminded her of her first time. She rocked her hips, joining him in the grinding motion, testing the sensations it produced.

Both breasts tightened, heavy and full. She ground against him harder, a sigh escaping her lips.

Barrett pulled out the skirts trapped between them until her hot core rested right on top of his bulging hose. His cock moved beneath her, twitching and straining.

She panicked, rearing to scramble off his lap.

“Easy, easy, easy,” he soothed, catching her before she fell face first onto the ground and lifting her to her feet. “You’re all right, little one. Nothing is going to happen until you say yes. I promised you that, did I not?”

She stamped her feet, smoothing her skirts and trying to calm her racing heart.

“Yes, sir,” she said, her eyes filling with tears.

She nodded, sniffing. “I know. I know that, I do. I just…” What had happened? She hardly knew herself. “I guess I got scared. Something reminded me.” She shuddered. It had been the thought of his manhood that frightened her. It had been manageable the night before, when she had a bit more control in how she touched it, but today had been too fast. “I’m sorry,” she said. She started to cry again. “I truly am sorry. I cannot be your wife. I’ll never be able to give what you want me to.”

“Hush,” he said. “You will, love. It’s only been two days. We have our whole lives together. I am not worried—you should not be either. You can trust me, Daisy.”

He looked cheered by that. “Let’s start back. We don’t want to miss the midday meal.” He helped her back onto her horse.

Her bare quim hit the saddle and the slickness of her juices made it slide. It felt so different from before; what did Barrett do to her body that made it react this way? She sucked in her breath at the sensation it produced. It was not quite as intense as Sir Barrett’s lap had been, but she still found a wonderful wave of heat each time she rocked back. They began to ride and she rocked into a delicious rhythm, rubbing her sex over the smooth leather. She stole a glance over her shoulder to see if Sir Barrett noticed her undulations, but he wore a blank face.

She continued, growing slightly dizzy, her breath staying high in her chest, coming in quick little gasps. She rubbed harder and faster until her muscles seized. She squeezed the saddle tight with her inner thighs as her bottom tightened and the muscles in her core contracted over and over again. When it passed, she slumped in the saddle, her muscles relaxed and warm.

When they arrived back at the stable, Sir Barrett helped her down. “You are in big, big trouble,” he growled.

She drew in her breath in dismay, her bottom clenching convulsively.

He didn’t say a word as he led her up to his room, swishing the crop ominously through the air. He shut the door and tapped the bed with the crop. “Bend over.”

She stole a glance at his face, but could not read whether he was truly angry or not. She bent over, leaving her skirts down, since he hadn’t instructed her to lift them.

He tossed them up her back. “Four strokes for being a very naughty wife,” he said, tapping her bottom with the crop. “Did you think I would not notice what you were doing in that saddle?”

“You broke the rules. You may not refuse me and then pleasure yourself. Only I will decide if and when you receive pleasure. That is twice you have defied me.”

He brought the crop down across her low buttocks.

The tenderness from the whipping the previous morning came back tenfold. She groaned. Another line of fire landed across her bottom. She broke into a sweat. He whipped her again and she yelped, lifting her torso as if to escape. He pushed her back down and applied the last stroke. She squealed and reached back, covering her bottom with her hands and hiding her face in the covers.

Daisy looked adorable when she’d been spanked. Truly, she took correction so sweetly it made him want to claim her, devour her, show her she was his entire world. She lay bent over the bed, clutching her welted buttocks like a sorry little girl, her sex glistening between her legs. He leaned over her, covering her torso, lacing his fingers over the tops of hers.

“This is another position we might try,” he murmured, praying she hadn’t been forced from behind. She didn’t struggle, so he went on. “I could take you right now, little girl.” He pressed his thickened cock against her plump folds. “I see you’re ready for me.”

She tightened her fingers around his, breathing hard.

“I think you want it, Daisy. I know you want it, but you’re scared. After I’ve possessed you in every way and every position, I will banish all other memories you have of men.”

She turned her head and he saw unshed tears glistening in her eyes.

He froze. “What are those tears for?” he asked.

“I want to believe you, Bear.”

Hope skipped across his chest.

“Believe it, little one. I will make you forget. You will only know me, my body, my love, my touch. I promise you that.”

She closed her eyes, looking troubled. “That would be so sweet.”

Saddened by her pain, he lifted her off the bed and stood, holding her against his body. After a while, he said, “I need to check on the progress of the wall. Do you wish to come with me?”

She still looked small and withdrawn. “What is my alternative?”

He smiled, toying with her braid. “I won’t lock you in my chamber. You are free to sit with the other ladies, if you like. In fact, you probably should, I think they are anxious to know you.”

He kissed her forehead. “Be good, little one.”

He left her, his heart heavy for the burden his little wife carried, the trauma he hadn’t yet found a way to take from her.

This extended preview is made exclusively for newsletter subscribers. However, if you got here by a search, you may not know that our newsletters include exclusive previews and free content consistently, so don’t miss out! Add your email below to get the SNP newsletter!