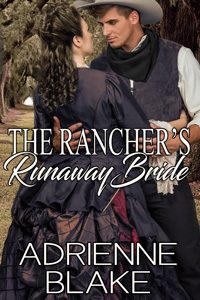 “Do you think you’re going to be sick?”

Jed sat MacKenzie down on the edge of the bed, held her arms, and looked into her face. She was certainly an unhealthy shade of green.

Her voice was weak and her hands were cold and clammy. And she was shaking. Jed was a man of the world. In the back of his mind he was counting the days since her last flux.

“Tell me truthfully, MacKenzie. Do you think you might be with child?”

She shook her head and looked at him with such sadness.

“You know it would be okay if you were. Tongues would wag of course, but then, when don’t they?”

MacKenzie shook her head. “No, no. It’s not that.”

So there was something. “Well, what then?”

But all Mackenzie did was shake her head and stare down at the floor. It was exasperating but he knew there was something she wasn’t telling him. Normally he would just command her to say what she was thinking but this time it was different. This time she was unwell and he’d never do anything to hurt her. Nothing not playful anyway.

At least her pallor looked like it was getting back to normal.

“Do you think you’ll be able to come down to dinner again?”

Jed raised a surprised eyebrow. “No? Why not?”

This was perplexing. He sat down beside her on the edge of the bed and scratched his head. “But you are feeling better, right?”

“Then why not? This is our first night here. Don’t you want to be down with the company?”

MacKenzie rolled her eyes and at the same time he had the first inkling of what this was about. Blanche. It had to be Blanche.

“MacKenzie, I command you to explain yourself. Why don’t you want to come back downstairs with me?”

MacKenzie folded her hands in her lap and pouted like a petulant child. “I don’t want to be down there with Blanche.”

“You and she…” MacKenzie bit her lip. “I just don’t like her. I mean it’s clear to me you and she were lovers.”

Jed cut her off before she could finish. “You’re being ridiculous, little lady. And you’re completely wrong about Blanche and me.”

“Am I? I don’t think so. I’m not an idiot, you know. I sense and feel things, just like everyone else.”

“And yet I say once more, there is nothing between us. I am only in love with you, trust me.”

“I can’t tell you why Blanche thinks what she thinks or does what she does, these days. How should I know what goes on in that pretty little head of hers now, any more than yours?”

“So you think she’s pretty then?”

Jed threw his hands in the air, exasperated. “Well, of course she is! Who would think otherwise? Blanche is a very beautiful woman.”

MacKenzie jumped up off the bed and started pacing around the room. She was more beautiful than ever when she was riled, but right now, damned annoying. And Jed was still hungry. Downstairs they would be serving prime rib right about now and he wanted nothing more than to be down there, eating his share.

“Silly, am I!” MacKenzie went on. “Dammit, Jed, I thought I could trust you, but it seems I can’t, and I wish, I wish we were home again—oh, how I wish we’d never come here.”

Now she had voiced her fears it seemed she couldn’t keep them under control. She was working herself up into a frenzy, and he knew there would soon be tears.

“Enough now, MacKenzie—you’re being ridiculous. Do you really want me to put you over my knee here and now?”

She had crossed the line and enough was enough. As she walked past him this time he grabbed her by the wrist and dropped her down over his knee. A moment later her skirts were up over her head and he roughly pulled down her bloomers.

“Wait, stop, what are you doing!” she cried.

“Dammit, MacKenzie, if you insist on behaving like a child, then that’s how you’re going to be treated!”

“You should have thought of that before you went off like a spoiled brat. I’ve been patient up until now, MacKenzie, but you’ve gone too far this time and I’ve had just about enough.”

Even as he spoke his hand was up in the air and came down hard on her bare backside. He gave her five hard spanks before he paused for breath, and each time he felt the sting on his palm as flesh collided with flesh. If she would behave like a child, then she deserved nothing less.

Beneath his grip, MacKenzie writhed and kicked and screamed but dammit, the woman needed to be taught a lesson. She had riled him like a fishwife and he wouldn’t have it! She was completely wrong, and deserved to be punished and punished harshly.

He looked down at her bare backside, now rouged where his slaps had left their mark on her bottom. She was so deliciously vulnerable like this. With her bloomers down around her ankles he could see all her private parts—her pussy, her bottom, everything was exposed and available to him.

Suddenly the desire to chastise her subsided, and he wanted nothing more than to fuck her and to fuck her hard. MacKenzie was his for the taking. But he was in no mood for gentleness. Instead he pushed her off his knee and dumped her face down onto the bed. Her skirts were still over her head and she struggled to find a footing.

“Damn you, MacKenzie, why do you always make me so hard?”

Jed pulled her skirts back and looked into her face. She was still angry, but the desire in her eyes was unmistakable. She wanted him as much as he wanted her right now.

“Damn you, Jed, why do I still love you even though you love that other woman?”

She was infuriating! Jed pulled his raging cock from his breeches and without further delay drove it home inside her sodden cunt.

“Is this me, wanting to fuck another woman?” he asked as he began to frantically pound her.

“You’re playing with me,” she panted. “We both know you who you really want to be fucking right now, and it’s not me.”

Her jealousy inflamed him, and he closed his eyes, focusing only on her tight, perfect cunt, and the passion that had taken over his entire body. God, how she drove him wild.

“You think that I’m imagining her in my bed?”

“Yes,” she groaned. “You’re inside me, but you’re wishing it was her pussy you were plowing right now.”

He grunted; something raw between a snarl and a growl. Why did this woman turn him on so much? “Say what you like, MacKenzie,” he hissed between thrusts, “but we both know this is what you really want, isn’t it!” He pushed her face down into the mattress and pulled her hips up high so he could really pump into her.

Her fury had fired them both, and he slammed his cock deep inside her, as if spurred on by demons. This woman was annoying, infuriating, beautiful, sexy, and adorable all at once. She was driving him insane and he loved it.

“Fuck it, MacKenzie, I need to come.”

Jed couldn’t hold back a moment longer. Her ass was so beautiful, her sex so tight, his excitement uncontrollable and before he knew it his cock rammed into her as deep as he could go and he came.

“Sweet fucking hell, little lady,” he cried. “I love you, MacKenzie, I fucking love you.” His cock was in complete agreement, for it felt like his seed not only shot into her body, but sought to claim her heart and soul as well. He was totally under her spell, and he knew it, he was happy to be there.

As his desire slackened, he felt himself go limp and for a moment he held himself on top of her, kissing the back of her neck as tenderly as he could.

“Thank you, Sir,” she purred. The little vixen had got exactly what she wanted.

Jed rolled off beside her and took a moment to catch his breath. In that time, MacKenzie turned and nestled into him. She began nuzzling into his neck, and he felt tiny bird kisses run up and down his chest as she peeled back his shirt and nibbled at his flesh.

As his breathing returned to normal, he raised his hand and gently stroked her hair. A calm fell between them; the storm had passed. “I’m afraid I’ve rather messed up your ringlets.”

“I am going to tell you this once, MacKenzie, and I need you to believe me. There is nothing going on with me and Blanche Hamilton. Not now, not ever. Do you understand?”

She nodded weakly. He had a feeling she still didn’t believe him. But she was going to have to.

“Good. I’m glad that’s understood, because I don’t want to have this conversation ever again. Is that clear?”

“Very good. Now, little lady, I’m going to tidy myself up, and then I’m going to go back downstairs and get me some dinner. If you want to stay up here tonight then that’s fine—I’ve kinda messed up your looks and it’s probably best you don’t present yourself as you are. But this is the last time, MacKenzie. After tonight you will attend every dinner, and you will behave with perfect civility to my sister’s guest, is that understood?”

Jed’s stomach was grumbling and if he didn’t get down to dinner soon it might be his turn to faint. He pushed himself up off the bed and MacKenzie sat up beside him and straightened her skirts.

“Would you like me to have a tray sent up for you? I know you must be hungry.”

He looked at her sideways and though he shook his head, he was no longer mad at her. “Very good, little lady. I’m sure something can be arranged. I’ll come check in on you later after the dinner is over.”

Jed stood in front of MacKenzie’s looking glass and checked his appearance. He didn’t look too disheveled. He didn’t think anyone would say anything when he went downstairs. Not that it would matter if they did. He was his own master.

Jed turned and went to give MacKenzie a parting kiss. Though her hair was a mess and her dress was all creased, there was a flush to her cheeks and a sparkle in her eyes. She looked so beautiful. In that moment their argument was totally forgotten and all he could feel was his love for her. He rubbed the back of his knuckle across her smooth cheek and gently tugged at her chin.

And then he kissed her one last time, and went down in search of his dinner.