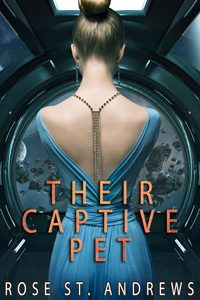 The cage door unlocked and she crawled out on all fours, which surprised her. He hadn’t ordered her to do that, and her bands weren’t on; it just seemed the right way to act. Crawling up to him as he reclined on the couch, she knelt before him, and he bent close to cup her chin in his hand.

“Come up here, my pet, and I will remove your tail. It is time I replaced it.”

He frowned, a dark cloud settling across his face. “You dare refuse me? So be it, I shall take my other type of pleasure from you!”

Every muscle in her body tightened and she swallowed hard as terror gripped her. What was he going to do to her?

Up and over his lap she went; she cringed, knowing what was coming, and yet resigned herself to it. She’d displeased her new master and so she had to be punished. She didn’t even resist or beg for mercy. His strong right hand squeezed her supple cheeks; her gauze-like unitard gave scant protection. Smack, he struck; she suppressed a soft squeak of pain, and then let out a gentle moan as his hand paused to caress her tingling flesh. Swat smack, her cheeks got matching spanks, a brief pause, and then half a dozen as his hand danced back and forth, right to left. She squeaked, her toes curled as his fingers swirled across her ass and dipped between her legs to tickle her. Her legs spread, her back arched, and again the spanking hand descended over and over. She squealed and yelped, and then gasped as his left hand grabbed her tail and twisted it. Her right cheek got a solid smack, a squeeze and caress, her left got the same, and then he again did the little alternating dance for another dozen.

“Silence! If I can’t have your ass one way, I’ll have it another. Ah, such delightful warmth, and the pitch of your cries brings joy to my heart.”

Her brow wrinkled as she thought about his words, even as the smacks resumed and her wails grew louder. Then she understood, Omar enjoyed spanking her; it wasn’t merely about punishing her, he got off on it. The heat in her bottom increased with each swat to her poor cheeks; she bounced on his lap, and the sting and ache went with it. Soon her ass was ablaze with cold fire and she howled at each smack.

“Oh, I shall, and you shall know yet another special torment,” he said with a chuckle.

Her brow wrinkled as she had no idea what he was talking about, and then she almost heaved off his lap as the tips of his fingers slid up and down her delicate lips. The teasing of his fingers, the rubbing of the cloth against her enflamed clit, and the kneading of her hot cheeks by his left hand all blended together to send her pussy into overdrive. She shook and shuddered, stars dancing before her eyes as her passion rose like a thermometer in August.

“Oh! M-m-master, I-I-I… you-ohhh,” she wailed, thrusting her crotch back into his hand.

His fingers thrust deep, stretching the fabric, rubbing it across her wet and engorged clit, going deep inside her.

“Come along, pet, you have to tell me, say it. What is it you need, you desire?”

He whipped his fingers out, his left hand twisted the tail, his right hand smacked and swatted, and she howled out a wail of pain and pleasure as her eyes rolled back in her head.

“Yes, this gives me such delight to know that we can use spanking for our mutual pleasure from now on.”

Her last word was a shout of frustration. He’d stopped everything. She looked around, concerned that something was wrong, maybe Amber or Ruby had walked in on them. But it was nothing, and then he eased her down off his lap to kneel next to him.

He pointed at her cage. “Off you go,” he said simply.

He rose to tower over her, his bulging cock hovering before her eyes. “I have meetings to attend, work to do, and troubles to resolve. So, get in your cage.”

“Silence,” he ordered. “You deny me my pleasure, I deny you yours. Perhaps you will learn a lesson from this. Cage, now!”

She hung her head, even as she felt the bands shift to again cover her hands and restrict her legs. Hobbling back to her cage, she curled up in the corner as he locked the door and marched from the room, leaving her alone to deal with her guilt and desire. As the minutes slowly accumulated, both increased. She felt terrible at refusing to give Omar what he wanted, and at the same time the heat and tingle in her cheeks migrated to her pussy, and her passion washed over her like waves building to a mighty flood. It was maddening. The stronger the pleasure became, the greater her frustration. All she wanted to do was come, and yet she couldn’t. She crawled around her cage, feeling like a tiger, her mind and body consumed by her lust.

Finally, she had to eat, her hunger for food almost matching her sexual appetite. Yet, her hands were still covered, and so she ate and drank from her golden plate and bowl like the mere animal she was, which only further enflamed her desire. Once done, she curled up in a corner and tried to not think about sex. That lasted all of about ten minutes. After that she again paced the cage like a tiger and shivered in sexual frustration.

The door opened, her head whipped around in time to see Omar enter the room. As with before, Zero and a string of other men clamored for his attention. He slammed the door in their faces and moved to get himself a drink, and she hurled herself at the bars.

He ignored her and moved to a narrow crescent-shaped counter on the far side of the room. Based on the glass and bottles of colored liquid sitting there, it didn’t take a rocket scientist to figure out that it was a bar. He poured himself a tall drink and downed it in three large gulps, and fixed another before reclining on a nearby couch.

He still ignored her, despite her repeated pleas.

Finally, she knelt there and softly sobbed as she shivered in sexual torment. Time became meaningless, and all she could do was wait for him to come to her, which felt like about an hour later. He stood before her cage, a weak smile on his face, and heaved a soft sigh.

“I am finally free of the torments of the day, and I will no longer torment you. However, I hope I have made my point.”

He actually chortled. “It is clear you need to learn of the pleasures you are denying yourself. So be it. Right now, open.”

The door unlocked and she just about leapt from the cage like a savage animal, and threw herself into his arms. He laughed harder, their arms and legs becoming entangled, and then their lips united.

“Ah, well, if nothing else, I have at least found a way to insure your sexual appetite is at its height.”

“More, more, give me more,” she begged, pulling at their clothes.

Carrie just about tore her clothes to shreds and would have done the same to his, but he managed to control her, and he was able to toss them aside in an orderly fashion.

“My pet, ease your passion; to rush the act of lovemaking will diminish the pleasure. Have you not learned that already?”

His large hands seized hers, pinning them to her sides. He got her to the bed, and easily took control of her body. She shuddered and groaned, her mind feeling as if it was literally going to burst into flames, yet she had no power over anything she did. No, Omar commanded every aspect of their interactions. His massive, muscular body practically covered hers. He took her hands behind her back with his left, while his right hand caressed and teased her breasts and nipples, and his legs were like tentacles massaging hers. Her head tilted back, her back arched as much as his control allowed, and she howled out her frustration. His lips found her neck, his tongue and hot breath her earlobe, he nibbled on her supple flesh, and then his hand slid between her legs. A new type of tickling started; she spread her legs and felt her passion build.

His lips drew close to her ear again. “Now are you seeing the virtues of a slow building to true pleasure?”

She blinked, her mouth opened and closed, but all she could do was shake and shudder in response, and then her eyes grew wide as his hard cock entered her drenched pussy. Her mind and body went up in flames. She came before he’d made a single thrust. Their arms entangled, she hugged his massive frame, his back muscles feeling strong yet supple, and his hands lightly caressed her shoulder blades. Lips connected, his warm and gentle against hers, and their tongues touched and slid across each other. His hips gave a small thrust to move his cock deeper inside her pussy. She moaned into his mouth, and then shivered and tingled as his hands slid around her ribs—lightly tickling her as they went—and cupped and teased her breasts.

“More, please, I beg,” she choked out, muffled by his mouth on hers.

He chuckled. “Slowly, my pet, slowly we build.”

Slowly was exactly what he did. His thrusts built up as they rolled about on the bed. Over and over his cock slid in and out of her damp pussy, and each time took her higher into the world of sexual delights. Her legs wrapped about his waist, her hips moving with his to insure he reached deep inside her, and all the while his lips and hands added to her pleasure.

His hips rocked and shifted, his shaft went deep, raking her clit and driving to her g-spot, and stars danced before her eyes as she again climaxed. Her passion just built from there, one orgasm building on the last one until she knew nothing but a sea of pleasure and delight. When he finally filled her with his hot seed, she felt as if her head was on fire.