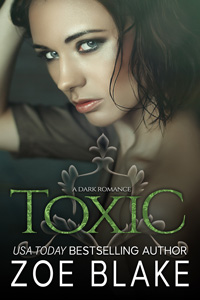 Stumbling backwards, the narrow aisle gave me no room for escape. My back slammed against the frosty glass and metal door that separated the train cars. Richard raised his arms to cage me in.

His breathing was as labored as my own. Resting his forehead against mine, he asked, “Do you enjoy torturing me like this, my love?”

Leaning back, I scanned his face to see any sign he was joking. His jaw remained rigid, his gaze steady. He was serious. “Torturing you? How am I torturing you?”

His hand wrapped around the top of my neck, under my jaw. “You like playing these games, don’t you?”

His body pressed into mine. I could feel the hard ridge of his cock against my stomach. Almost without thought, I shifted my feet wider, opening myself to him, already feeling the familiar warm rush of arousal.

His lips trailed along my cheek to my ear. “You like making me chase you. The drama and adrenaline rush of bringing a man like me to his knees.”

His other hand moved to palm my breast through my dress as he rasped, “How often have I told you how much I love you… how I would do anything for you? And how many times have you dared to test me on that?”

His mouth moved to my neck. I moaned as my fingernails dug into his upper arms. “Admit it, baby girl. Not once, when you’ve said it was over, did you really mean it. Not once have you run without expecting me to give chase.”

Desperately, I tried to block out the truth of his words. Was it possible all the games I thought he was playing were actually my own?

The kaleidoscope I was caught in spun.

Hadn’t I liked it when he had gotten jealous over the professor? I hadn’t even put up much of a fight when he had told me to leave school. I actually preferred the classes and internships he was setting up for me. Hadn’t I practically begged to get caught going to that play audition? Both Richard and Jane have told me the Victorian game was my idea. I knew for certain I had tried to escape at least twice… but were those all just power plays by me? Attempts to get Richard’s attention and force him to once again prove I was his everything by making him chase me?

From the beginning, I’ve questioned why a man as handsome, rich, and intelligent as Richard would want a girl like me. Had I been seeking validation by forcing his hand repeatedly? Forcing him to prove his love? And yet, also from the beginning, he had done nothing but support my career efforts, shower me with gifts, and give me his undivided attention and affection.

I was the puppet master.

I was the cruel one taunting him and playing with his mind.

Then, keeping his wicked gaze trained on me, he slowly undid the buckle of his leather belt and pulled it free.

Like prey caught in a trap with nowhere to run, I watched and waited for his pounce.

“You like playing with fire. It gets you off. The power you hold over me.”

“Richard. No. I don’t. I’ll stop. I promise,” I beseeched, as I raised my hands in some pathetic attempt to try to keep the rising tide of lust and anger at bay.

“It’s too late, baby girl. You wanted the beast. Now you’ve got him.”

His arm shot out and snatched me by the front of my dress.

Too late. He tore the bespoke garment from my body, shredding the delicate tulle material. Large embroidered flowers fell limply at my feet. It left me in only a thong and my strapped stilettos. Snaking an arm around my waist, he pulled me against the heat of his naked chest and claimed my mouth for his own. His tongue dueled with mine. The taste of him burned of scotch and rage.

Once more he placed a hand at my throat, just under my jaw, forcing my head back so he could feast. He laved and bit at the delicate skin along my neck and shoulder then his hands clawed at my back, straining to pull me even closer, to fuse our bodies.

Everything was him. The feel of his mouth. The strength of his hands on me. The spicy scent of his cologne. The scrape of stubble from his jaw against my breast as he sucked a nipple in deep, playing with it with the tip of his tongue.

Picking me up, my legs straddled his waist as he turned and walked down the aisle till he got to a grouping of four seats facing each other with a table in between. I thought he would place me on the table, but he lifted me up and placed me on my knees on the seat. Using his knee, he dislodged the table, sending it crashing to the floor.

Grabbing my hair, he turned me around till my back was facing him. As he ran the flat of his hand along my back, I arched and mewed as I pushed my hips out. I had no warning before I felt the sting of his palm.

Again and again, he spanked my ass. His grip on my hair kept me in position. The rough fabric of the train seat rubbed at my knees as I squirmed with each strike. As the tears fell down my cheeks from the burning hot pain, his fingers toyed with the strap of my thong before viciously tearing it free of my body. I cried out as the lace roughly scraped against my already swollen clit.

In the silence of the train car, all that could be heard was his harsh breathing… then the sound of him lowering his zipper. That simple sound reverberated down my body like a gunshot, sending a rush of heat between my legs.

Just then, he stepped away from me. Not for one moment did I think to move even a muscle.

When he returned, I could smell lemon verbena. At first, I was confused, then my eyes widened with alarm. Twisting, I covered my ass with my hand as I tried to beg, “Please, Richard. I’m sorry for running! I’m sorry for not telling you about the bird! I’m sorry about everything.”

Driving his fingers into my hopelessly tangled curls, he leaned in close and snarled, “Take your punishment.”

In horror, I watched as he squeezed the contents of my small lotion bottle onto his thick, pulsating cock. Wrapping his fist around the shaft, he pumped his hand up and down the length, coating it with the soft-scented cream. My entire body trembled. I knew what was coming.

The degradation of being dominated in such an intimate, invasive way.

The pressure of his hand on my back forced me to lean forward and push my ass out even more. My knees rested on the edge of the seat as I grasped the cushioned back. As the head of his cock touched the seam between my cheeks, I couldn’t help but clench them tight in fear. That earned me several fierce spanks on my already sore and bruised ass. The next time I felt the head, I strained to keep my body still. Taking small pity on me, he rubbed the lotion-coated tip over my puckered rosebud, slightly lubricating it before his strong fingers wrapped around my hips.

“Brace yourself, little girl,” he growled.

Then he thrust his hips forward, tearing into my tight, dark hole.

The wide head popped inside before the long, thick shaft drove in deep. My back arched.

I could feel the brush of his chest hair as he leaned over me. Biting my ear like a stallion bites a mare as he fucks her from behind, he breathed, “You will take every fucking inch.”

Ruthlessly, he tore into my asshole. My stomach cramped as I clawed at the seatback with each push of his hips. “Please!” I moaned.

I hated when he fucked my ass. Hated the way it made me feel and hated the pain. Most of all I hated the way he made me come while still buried deep inside of me. Proving to me the dominance he had over my mind and body. Proving over and over again how much I needed the pain to feel pleasure.

Looking over my shoulder, I watched as Richard tilted his head back and howled as he pounded into my small body. A beast claiming his mate.

“Touch yourself. Now,” he charged.

His balls slapped the back of my thighs as I reached between my legs and began to rub my clit, feeling my own tortured orgasm build.

“Do you like that, baby? Do you enjoy feeling me deep in your ass?”

I could only moan in response as his heated words went straight to my fingertips.

“Should I pull out and make you suck me dry? Make you lick every inch?” he threatened.

My fingers slid between my nether lips as I got wetter with each dirty word he uttered.

Suddenly he pulled free. The pain of him pulling out was almost as bad as when he pushed his way into my tight passage. I could hear him spitting on his fingers before he rimmed my sore hole.

“Look at that beautiful gape. I love stretching your little asshole. Tell me to fuck your ass again.”

My fingers dug into the seat as I rubbed my forehead against the fabric. “No! Please, don’t make me say it,” I begged.

Stepping back, his hand landed on the sensitive skin of my upper thighs.

My thighs burned as he continued to punish them. It felt like a thousand hot bee stings running up and down my legs.

Sniffling, I rubbed my running nose on the seat. “Because I’m a dirty little girl who likes it,” I wept.

Needed to be dominated and owned by this man.

The lotion had already been absorbed, so when he entered me with his heavy cock a second time, it burned and ached.

His fingers joined my own to rub my clit. As I became lost in the decadent agony, he took over, pinching and rolling the sensitive bud between his fingers till I came with a gut-wrenching scream.

Richard came soon after, driving his hot seed deep into my bowels.

Lifting me into his arms, he then sat down with me straddling his hips. The Mikado silk of his trousers felt like sandpaper against my thighs. Reaching up to cup my face with his large hands, he looked me deep in the eyes and warned, “Remember, you are the one who summoned the beast,” before spearing into my ass again with his still hard cock.

With a cry, I collapsed onto his shoulder as my body was once more used and abused with each powerful thrust.

The train continued to speed through the gloomy night toward Paris, as our sweaty bodies writhed and bucked with each rumble of the track.

I knew we were racing at top speed to the end of the line, to the inevitable carnage of twisted and damaged souls… but in that moment I didn’t care. I crashed into him and let him consume me.