Trained by the Alien by Maggie Carpenter – Extended Preview 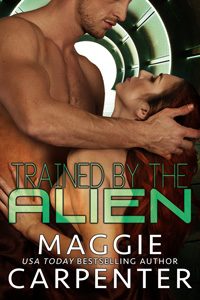 Abby Walker had many qualities that had made her the perfect candidate for the ALFEE team, and one of the most important was her skepticism. Devotees of the UFO phenomenon often looked to prove the legitimacy of sightings and evidence, but Abby remained unconvinced until the information became irrefutable. At times she frustrated the team, but her ability to look beyond what she hoped was the truth had been invaluable. Sitting on the comfortable sofa and gazing at Earth, she had a thought.

How did she know she was on an alien craft?

She could be viewing a projection.

Had the wall truly rippled, or had she witnessed a simple magic trick?

“But the openings,” she mumbled, dropping her eyes as she recalled the bizarre moments. “Still, magicians can create all kinds of illusions, and why would aliens so closely resemble humans? I wonder if this is just a big hoax, but if it is, what’s the goal? My safe room turned to dust. That couldn’t have been an illusion, or could it? Hallucinogenics! Did someone spike my dinner, or am I just grasping at straws? I have to consider the possibility this is all bullshit, except… the spanking! Shit! If ALFEE is being put through some kind of test, I wouldn’t be subjected to anything like that—I don’t think I would.”

Lifting her gaze to stare back at Earth, she was shocked to find the blue and white planet disappearing at an astonishing speed.

“You must return you to your chamber.”

Zaroff’s voice echoed through the room, and as alarm surged through her, the doubts about the veracity of her experience began to wane.

“Zaroff, if you can hear me will you please tell me what’s wrong?” she called out, jumping to her feet. “Please! This is scary.”

“There is an incident near Mars, but your compound is safe and I know exactly what’s happening. The situation will soon be in hand, but you must return to your chamber. If we suffer through a bump you’ll be safer there.”

“I’ll explain later. The keeper will be taking you back through a different passage,” he declared, as her alien watchdog strode into the room. “That is all.”

“Follow,” the keeper said firmly, and as the deep line cut across his forehead, he added, “Promise!”

As he marched swiftly to the opposite side of the room she hurried behind him, discovering the new passage wasn’t brightly lit and curving, but straight and filled with the green glow. It was also a much quicker walk back to her chamber. Once safely back, the keeper left, but still unnerved, Abby picked up the glossy box and hurried across to the wall.

“Show me the compound on Mars!” she ordered, hoping she’d delivered the instruction correctly.

Instantly the screen came to life, and the base came into view. Everything appeared normal, but a streak of yellow suddenly flashed by, followed by another. A second later the room rocked, almost toppling her off her feet. Heart racing, she dropped to the floor in case it happened again. It did, but more violently.

“Don’t be alarmed, Abby,” he said, appearing through the rippling wall. “The incident has been resolved. I’ll be with you shortly.”

“Incident,” she muttered, wishing her heart would settle. “We blasted away from Earth, there were flashes over the compound, and this ship, or craft, or whatever it is, was jostled. That’s an incident? This just gets crazier by the minute.”

Stretching out on the spongy floor, she moved her arms above her head and let out a heavy breath, but a knock caused her to sit up.

“What did you mean by an incident?” she asked, rising to her feet as Zaroff entered. “I saw the flashes of yellow pass the compound. What were they, and what caused the bumps?”

“There are scavengers in the galaxy and we don’t want them bothering Earth’s colony. We chased them off with some warning laser blasts. The rocking you felt were waves of energy, like the wake of a ship in the ocean. Nothing to worry about, but the observation deck doesn’t have the forgiving floor of this chamber. I didn’t want you to hurt yourself if you fell over.”

“This was as simple as scaring a rabbit off a carrot patch with a shotgun. Can you relate to that?”

“That’s a relief. I thought maybe we were under attack or something.”

“No one would dare attack us.”

“Now that that’s out of the way, it’s time to deal with you, and as I mentioned, your punishment will be more than a simple spanking, but I’ve decided to combine it with your training. Remember, Abby, when I give you an order I expect it to be obeyed without hesitation. If you refuse, or question me, you’ll be sorry. Am I being clear?”

“You’ve lost the privilege of calling me sir or Zaroff. Until I tell you otherwise you’ll refer to me as Master. What is it? I sense confusion.”

“Probably not, but I can assure you this is very real and we must continue. Place yourself on the floor on your elbows and knees. Lock your fingers together, and spread your ankles three feet apart. Once I’m satisfied with your position you’ll find it impossible to move.”

“Of course I’m serious. Do not test my patience. On the floor. Elbows and knees! Now! Say, yes, Master, and follow my instructions.”

Not only did his commanding tone scare her, she realized she’d pushed her luck. Hastily dropping to the floor she took up the lewd position, hoping he wouldn’t do anything truly dreadful. She quickly discovered her knees and forearms were sticking to the spongy flooring, then his hand unexpectedly cupped her sex. Heat flaming across her face, she gasped in shock and stared over her shoulder.

“I have placed a stimulator against your clitoris. It will sense when you are nearing an orgasm and will automatically lower its energy. You will not be permitted to climax until I decide you may, but you will have some control over it. Take hold of this,” he declared, crouching next to her and placing a remarkably realistic penis between her hands. “You will suck it as you would a man’s cock. As you please it, the stimulator will respond. This is how you will be taught to pleasure the ruler. If you perform well I might allow you to have your orgasm. Do you have any questions?”

“I’m not hearing a question.”

“For how long?” she managed, only because she couldn’t think of anything else to ask or say.

“How long will you be sucking the cock? As long as it takes for you to do it competently. The stimulator will be your guide, and I will be keeping a close eye on you. If you do not start with the appropriate enthusiasm I will land a hard stick upon your backside.”

His warning sent a chill down her spine, but a soft, scintillating sensation suddenly buzzed against her pussy.

As she wrapped her mouth around the large phallus and slid her lips up and down the shaft, the tingling against her clit increased. When she lapped at the head, the sensations grew more fervent, and she couldn’t ignore the scintillating pleasure.

“Good, you have the hang of it,” Zaroff exclaimed. “I’ll leave you now, but I’ll be watching.”

She expected him to march away, but he paused, leaned down, and moved his hand over her upturned cheeks.

“You do have a very nice rear,” he murmured, fondling and squeezing. “The ruler has given me latitude in your training,” he continued, landing a few quick swats. “Interesting. I can already see dampness against the crotch of the suit. This is encouraging. He’ll be very pleased with this report. You have the sexual appetite we suspected. Keep sucking. And one more thing, Abby. I can monitor the stimulator. I’ll know if you’re slacking off, and if you do I’ll return to administer correction, but I cannot resist spanking you before I leave. It does give me pleasure, and you’ll be reminded of my very hard, stinging hand.”

Though she didn’t want to be, she found herself lost in the delicious vibration against her clit. Controlling the tingling waves made her task far more enjoyable than she’d anticipated, and Zaroff’s hot smacks only served to stoke her carnal fire. His palm slapped slowly, pausing often to caress her cheeks. She couldn’t stop from surrendering to the decadent attention, and found herself wriggling in a silent request for more every time his palm left her backside. It became a thrilling erotic ride, but when he spread her cheeks and pressed his finger against her rosebud, even though it was covered by the silver suit, she jerked her head up.

“You are not permitted to stop because I am giving your third hole attention!” he exclaimed, landing a volley of fiery slaps. “Continue sucking that cock immediately. You may think your back hole is off limits, but I assure you it is not.”

Though breathless from the unexpected touch, she dove her head back down, and as she fervently sucked, the stimulator sparked fresh energy through her sex.

“Just as well I decided to linger for a few minutes,” he growled, massaging his thumb against her forbidden opening. “Such disobedience! But now I know you are guarded about the pleasure this area brings, it will be the focus of my next visit. Suck harder as I do this,” he ordered, pushing his thumb against her. “The better you suck, the more pleasure your pussy receives. You will learn to love this attention. Suck with more gusto.”

His unwelcome thumb agitated her rosebud, and doing her best to ignore it she pumped her mouth up and down the counterfeit cock. The stimulator responded, her orgasm began building, but as she crested the wave the buzzing against her clit suddenly waned.

“You see how I control your body?” he murmured, fondling her cheeks with his free hand as he continued the unwelcome fiddling with his thumb. “Your punishment is not being allowed to orgasm. Lift your lips off the cock and tell me what you’ve learned.”

“You really are in charge,” she panted. “I’m sorry I used the bad language, and I’m sorry I tried to fool you. I should have known I couldn’t do that.”

“Good. I’m going to add a stimulator back here before I leave. The same method applies. The better you suck, the greater your pleasure. I can control both from my desk. If you continue to perform you’ll be rewarded with an orgasm, but if you resist,” he warned, tapping the tiny back button he’d placed on the suit where the fabric dipped between her cheeks, “you will be on your knees and elbows for a very long time.”