Sold by the Alien: A Rough Sci-Fi Romance by Loki Renard 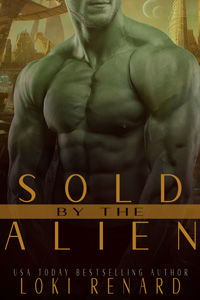 He’s going to sell me to aliens. But not really. It’s complicated…

Zed saved me from being eaten, so he’s got that going for him.

On the other hand he’s an alien, a big green one, and after he’s inspected me quite intimately and spanked me until I know who’s boss he’s planning to auction me off for whatever shameful use some lucky buyer has in mind for a blushing and apparently suitable-for-breeding human female.

At least he’s going to steal me back after he sells me, even if it’s just so he can sell me again.

Plus he’s huge. You know, in the “That can’t possibly fit!” kind of way.

Which can be good or bad I guess, depending on how you feel about being sore every morning.

Publisher’s Note: Sold by the Alien includes spankings and rough, intense sexual scenes. If such material offends you, please don’t buy this book.

“Have you learned the lesson?”

“Yes.” I answer quickly, because all other potential answers lead back to the lash, and I do not want that.

Those two words are harder to say than I expected. They catch in my throat, like I might choke on them.

“That’s right,” he says, tipping my face up to his. I meet his purple gaze and feel about as small as it is possible to feel. “You’re mine and you’ll obey me, or I will do that again. And now, for the second part…”

I had almost forgotten the second part, or hoped that it was not something he truly intended on going through with.

He’s running his hands over my thighs in a thoroughly intentional way. “Your punishment is not complete,” he intones. “And you know it.”

I don’t even know how to finish the sentence. He did tell me what he’d do, and I know he intends to carry it out. But if he does it in the same way he whipped me…

He turns me over his knee and my uncertainties are swept aside by the spreading of my aching cheeks followed by the very tender, wet touch of what must be his tongue right on the tight little bud of my ass. His grip on my sore ass makes me whimper, his heat against the tight, tender spot which evaded punishment so far but will not for much longer. He swirls the tip of his agile tongue around and around, creating a small tornado of sensation between my cheeks. God. Is he going to actually make me want this? The heat from my thrashing is still intense. I am overloaded with sensation and some of it is being channeled to the soft, downy lips which hide the hole he has already claimed twice before.