Sold to the Beasts by Sara Fields 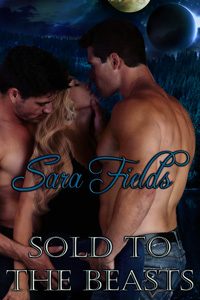 As an unauthorized third child with parents who were more interested in their various criminal enterprises than they were in her, Michelle Carter is used to feeling unloved, but it still hurts when she is brought to another world as a bride for two men who turn out not to even want one.

After Roan and Dane lost the woman they loved, they swore there would never be anyone else, and when their closest friend purchases a beautiful human he hopes will become their wife, they reject the match. Though they are cursed to live as outcasts who shift into terrible beasts, they are not heartless, so they offer Michelle a place in their home alongside the other servants. She will have food, shelter, and all she needs, but discipline will be strict and their word will be law.

Michelle soon puts Roan and Dane to the test, and when she disobeys them her bottom is bared for a deeply humiliating public spanking. Despite her situation, the punishment leaves her shamefully aroused and longing for her new masters to make her theirs, and as the days pass they find that she has claimed a place in their hearts as well. But when the same enemy who took their first love threatens to tear Roan and Dane away from her, will Michele risk her life to intervene?

Publisher’s Note: Sold to the Beasts is a stand-alone novel which is the fourth book in the Captive Brides series. It includes spankings and sexual scenes. If such material offends you, please don’t buy this book.

With almost a sort of ceremony, each man took hold of the hem of her nightgown and lifted it up and over her back, revealing her naked bottom to everyone in the house. Shivering, she felt the chilly air caress the bareness of her pussy, making her hyperaware of just how wet she was. Moving to reach back and cover herself, she whimpered when strong hands pressed her firmly back down.

“Disrespectful behavior will not be tolerated in this household. Miss Carter, you willfully ignored my orders to join us at a meal this morning and then, you were rude and insolent and left the table without permission,” Dane began, and she trembled. A hand stroked the sensitive skin of her backside on each side and her pussy clenched, hard.

Fingers moved to cup her bottom, drifting dangerously close to the moisture between her thighs. One finger slid along her wetness, making her well aware of the fact that everyone else could see it too. She felt her face heat with embarrassment.

“You will hold position until you are given permission to move, is that clear?” Roan said, his command causing a quiver to race down her spine. The hand cupping her left bottom cheek moved even closer to her pussy and she whined out loud. A single finger ran up and down the folds of her sex, gliding easily over her wetness once again.

Her clit throbbed and her core ached, a deep-seated need welling up from inside, so intense that she yearned for something more, though what she didn’t yet know. That finger dipped inside her wetness and she moaned. Then, the digit drifted up the cleft of her ass, before it settled on her bottom hole. Strong hands pulled her cheeks apart and she squeaked in embarrassment.

“Please! You can’t!” she begged as the digit pressed against her tight rim of muscle.

The finger pushed harder and she struggled to escape but another arm wound around her waist. On display as she was, she cried out, overwhelmed with her shame, yet her pussy clenched around empty air, wet and aching to be filled.

The moment the digit breached her tight rosette, she keened at the burning sensation as she was stretched like never before. Feeling confused, humiliated, and ridiculously aroused, she stilled as the finger pressed in and out of her bottom.

“Elbows on the table, Michelle,” Dane commanded, and she whimpered as she followed his directions.

“Look at this naughty bottom, maids. Disobedient humans in this house get their backsides punished, inside and out,” Roan said.

The digit pushed further inside her, deeper than before as she knelt there on the table on her knees and elbows and she whined at the stretching burning sensation.

Another hand cupped her pussy and she trembled, having never been handled in such a wanton manner before. Her clit pulsed at the unexpected contact.

“Roan, I can feel her pussy clenching as you punish her bottom hole. Naughty indeed…” Dane said and she wished a black hole would open beneath her so that she could disappear. The finger pushed in and out of her back channel and before long, her hips were twitching in tune with his movement.

“Spread your knees. Show everyone just how wet that pussy is,” Roan whispered in her ear and she cried out as she followed his command, thoroughly humiliated already. The hand cupping her mound drifted away and she moaned in shame, humbled in a way she had never even imagined to be possible.

2017-11-25
Chris
Previous: Trained for Their Use Grabs a Top 100 Spot
Next: Heating Up the Holidays by Maddie Taylor, Alexis Alvarez, Morganna Williams, Meredith O’Reilly, and Dinah McLeod