Sold to the Billionaire by Emily Tilton 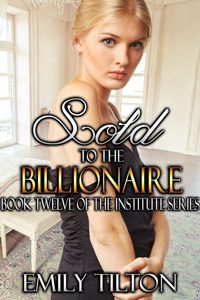 As the daughter of the prime minister, eighteen-year-old Heather Gerber is used to society’s high expectations, until the day her entire world is radically changed in an instant and she becomes little more than property to be bought, sold, and used in any manner her future owner sees fit.

Brought to the Institute to be prepared for her eventual sale, Heather quickly finds herself naked, blushing, and helplessly aroused as she is thoroughly and painfully spanked by stern, handsome trainer Paul Federico. But though Paul knows that Heather will soon belong to a powerful billionaire, as he teaches her what it means to surrender her virgin body to a dominant man he cannot help falling for the beautiful, innocent girl. Can he find a way to claim her for his own?

“Why do you think Dr. Sellers punished you that way, without your clothes? Why do you think your housemistress made you shave between your legs before you went to the dean’s study?”

She clearly hadn’t connected the two things in her mind—at least not in the way Paul meant her to connect them now. Her furrowed brow showed him that the answer didn’t lie deeply buried.

The van picked up speed. They had left campus and were headed for the highway. The Selecta facility where Heather would be broken was only fifteen miles away.

“Because… because…” He watched her shy away from the real answer—the answer he wanted. “Well, Mrs. Weston said it was because naughty girls have lost the right to modesty, and they have to earn it back.”

Paul nodded. “That’s right, Heather. But it’s not the whole story. Who is it who’s responsible for a girl’s modesty?”

Heather frowned. “Her husband? But… I don’t have a husband, so…”

“So when you’re away at school, and you’re a young woman who gets into the kind of naughtiness you do, who takes the husband’s place?”

The logic made sense only from the most old-fashioned point of view, but of course Heather’s father had himself returned this nation to that traditional way of looking at things.

“That’s right. Now why does a husband get to tell his wife when to take off her clothes, and why does he get to tell her how to take care of her private parts?”

The girl’s face, whose color had receded a little as she considered Paul’s questions, went bright red once again. Her brattiness returned, right on cue.

“I’m not going to answer that! What kind of a program is this? Maybe you can take me to some reform school or something, but I’m sure you’re not allowed to talk about… about…” Heather clearly wanted to say sex, but her modesty kept the word from her lips. She finally finished with, “…that kind of thing!”, looking a challenge into Paul’s eyes.

“I’m afraid you’re mistaken, Heather,” Paul said calmly. “This program is all about that kind of thing. Now come over here and give me your phone. Then you’ll get undressed, and you’ll lay yourself over my knee for a spanking.”

Paul got up from the bench and took Heather by the upper arm. He pulled her to her feet, and brought her, despite her struggles, across the van. She clung desperately to her phone with both hands, but he pried the hands open and took the phone away. Holding both her slender wrists in his left hand, he used his right to toss the phone to where Heather’s book bag lay disregarded on the other side of the van.

Then he sat back down on the bench and pulled her across his lap. Holding her down firmly, he began to spank her, very hard, through the dress and the panties. Paul raised his hand high, and brought it down sharply on a bottom he knew still bore the fading welts of the terrible caning administered by the dean.

Heather started to weep almost immediately. “Please! No more! It hurts so much! Please! I’ll…” She clearly didn’t know what to promise: Paul’s intimation of the sexual nature of the discipline she would now undergo had left her without an idea to which to cling, about how to avoid this lesson over his knee.

“You’ll take off your clothes, is what you’ll do, Heather Gerber,” Paul said, still spanking her. “Because you’re going to a place where you’ll be trained as a submissive bed girl for a wealthy man. Your modesty belongs to him, now, and as your trainer it belongs to me, too.”

2017-12-31
Chris
Previous: Sold to the Gladiators by Jaye Peaches
Next: Daddy Commands by Maggie Ryan