Sold to the Gladiators Seizes a Top 10 Spot

Jaye Peaches’ most recent release, Sold to the Gladiato 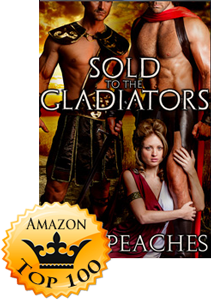 rs, has made the Top 10 in the Ancient World Historical Romance category on Amazon! Congratulations, Jaye!

★★★★★ Mozzy @ Amazon.com “Gladiators Rule.” on December 18, 2017
When you read this new book of sold to the Gladiators I’m sure you would wish that you were the female. If the picture on the front of the book describes the men then oh la la. Both Men were definitely Alpha Dominant with a firm hand and big hearts.

Felix is on a journey along with his friend Rufus, to find a women among his people in order to please the fertility gods. On his way home he comes across Bethan who has been accused of stealing and is due to be punished. As the way things go Felix gets to punish the slave, and there after purchases her and makes her his. She is also shared by Rufus as they are both used to sharing women.As they go along with their journey Felix and Rufus purchase more slaves, but it is Bethan that causes them a bit more trouble with things that she isn’t sharing with them.

I just love these two men and I’m sure you will to. the men may be fierce, large, but they both have good hearts. And there’s nothing more better than a good man, who rules with a firm hand..

★★★★★ DP @ Amazon.com “Sexy Hot Gladiators” on December 24, 2017
Really enjoyed this book about Bethan and her two gladiators – Felix and Rufus. When Felix comes upon Bethan and her cruel master he decides he must have her as she will be perfect for him to please the fertility goodness to restore his lands. He buys her and the three travel together to his new home. The men are like brothers and share Bethan in every way. Rufus is more caring than Felix and Bethan feels herself drawn to him.

Bethan is also interested in finding her brother who was captured along with her. When she tries to escape the two men she is spanked and punished. She will not tell them why she ran so they keep her even closer. The men can’t help their growing feelings for the young girl. This book was quite sexy. The two gladiators were opposite and punished Bethan in different ways. Jaye Peaches knows how to write some hot stuff. Thoroughly enjoyed this book. You won’t be disappointed. I received an ARC from SNP for an honest review.

★★★★★ Renee @ Amazon.com “A hot story with two gladiators… what more could you want?” on December 18, 2017
An interesting and creative story set in ancient times with lots of sexy heat. I enjoyed the different approaches of Rufus and Felix. Although I will say that Felix’s approach to Bethan could be frustrating at times. He did find his way in the end. Bethan is such a strong character, she needed two strong gladiators to take her in hand. I loved the interactions between the characters and the attention to details are well done, making it easy to visualize the ancient world.

2017-12-31
Chris
Previous: Capturing Kate Locks Up a Top 20 Spot
Next: Sold to the Billionaire by Emily Tilton