Sophia and the Duke by Jaye Peaches 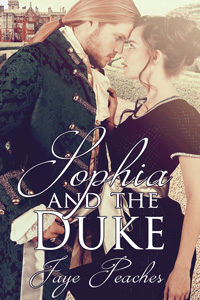 After the passing of her husband, the elderly Duke of Brokenhurst, twenty-two-year-old Sophia chafes at her family’s expectations during her lengthy mourning period. When she is free to re-emerge in society at last, at her grandmother’s insistence she entertains the courtship of Nathaniel Hartwell, a distant cousin of the old duke and the man next in line for the title.

To her shock, Sophia learns that Nathaniel has spent the last eight years living as a trapper and fur trader in the mountains of Canada, isolating himself from the world after the tragic death of the woman he loved. Though he is a rough, uncivilised man, his devilishly handsome looks and commanding presence excite her in a way nothing ever has before.

Sophia sets out to transform the new duke into someone suitable for polite society, but when her comments become disrespectful and mocking Nathaniel takes issue with her behaviour. Almost before she knows it, she is over his lap and her aristocratic bottom has been bared for a sound spanking.

Knowing that it is the right choice for all concerned, Nathaniel asks her to be his wife, but despite the fact that their marriage begins as one of convenience he is determined to show Sophia the intense pleasure a strong man’s dominant lovemaking can bring her. Though her spoiled attitude occasionally earns her a bright red, well-spanked bottom, as the weeks pass her desire for him grows ever stronger. But can love truly bridge the gulf between people from such different worlds?

Nathanial lifted up her petticoat and uncovered her bare bottom. She shivered as he stroked each buttock in turn, running a hand over her contours, tracing the line between her thigh and cheek. Then he tapped the slipper against one. She screwed her eyes up, holding her breath.

The smack echoed against the windowpanes and she yelped at the sting. It may have only have impacted a small area of her crease, but it had smarted. She drummed her feet on the floor.

The second whack of the slipper struck her other cheek and she jumped up, rubbing the spot.

“Down, Sophia.” He pressed between her shoulder blades and left his hand resting on the lowest part of her back. “These are going to count, my dear.”

She gripped the chair, turning her knuckles white, and clenched her buttocks. He aimed higher and it cracked against her right globe. Then another, swiftly applied to its neighbour. She arched her back, lifting up her shoulders and locking her elbows, but the force of his hand kept her down, and he bundled her petticoat under his palm.

The smell of coffee hit her nose as she sniffed and a solitary tear dropped off the end of her nose, landing on the wrecked rug. Now she felt ridiculous and she knew it was her own stupid fault. Why could she not control her mouth when in awkward situations? What drove her to shame her own husband, a man she loved passionately? Was she conceited, ungrateful?

He spanked her bottom twice more as she struggled with both her inner demons and the pain. How she could ignore the pain in her dreams she didn’t know, but it seemed she’d abridged that atrocious sting out of her memory.

“To keep a civil tongue in your head as I do. Do you realise how hard it is to keep my uncouth voice buried deep? You know how it comes thick and fast in the heat of passion, yet I manage to speak as a gentleman when in the company of others.” He looped his hand under her waist before administrating more spanks.

She sucked air between her gritted teeth before speaking. “Yes, my lord. I will be a good girl.”

He continued to paddle her bottom with the slipper, but he reduced the intensity and speed. “You will be a good little duchess, won’t you?” he murmured and the slipper tumbled onto the floor. He stroked her burning arse, letting her slip into another world where fancy words didn’t matter and her imagination rampaged unhindered. If she could forget the pain, just remove it from her consciousness, then how delicious he sounded!

2015-08-13
+admin
Previous: A Scandalous Arrangement by Ashe Barker
Next: His Captive’s Heart by Meredith O’Reilly