Staking Their Claim by Ava Sinclair 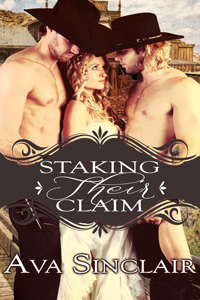 Jenny Beaumont’s brother Will told her countless times about his plans to follow his friend Cody Drake to the mining town of Coloma, and the innocent eighteen-year-old can’t help but romanticize the California Gold Rush. When she faces the prospect of being married off to an older man by her greedy relatives after Will’s tragic death, Jenny heads west to fulfill his dream.

In the months he has spent waiting for Will to join him, Cody has become close friends with Nigel Simms, an Englishman who recently saved his life. After he finally gets word that Will has made it to Coloma, Cody is shocked to discover that the new arrival is actually Will’s little sister Jenny disguised as a boy. Learning of his friend’s passing is bad enough, and now he’ll have to look out for Jenny as well. As far as he is concerned, protecting Jenny means taking legal custody of her, and he is pleased when Nigel agrees to share the responsibility.

Both men make it clear to Jenny that she will be expected to obey them or face the consequences, and furthermore, as their ward she will be cared for like a child. Before she knows it, she finds herself being bathed, dressed like a little girl, and spanked on her bare bottom when she is naughty. But despite her embarrassment at such treatment, Jenny quickly discovers that the two men’s firm-handed dominance and loving correction awaken a fire in her that she never knew existed.

Cody and Nigel didn’t plan to fall in love with the same woman, but in no time at all Jenny has captured both of their hearts. Soon they are sharing their little ward in the most intimate way possible, teaching her all the ways that a man—or two men at once—can make her blush with shame and ache with need at the same time. But keeping a beautiful young woman out of harm’s way in a rough mining town is no easy task, even for two men. Can Jenny truly trust Cody and Nigel to keep their little girl safe no matter what?

“Did you mean what you said, Jenny, about trusting us to correct you if you did wrong?”

“Of course!” Her eyes were shining as she spoke. “You’re my husbands—if not in the eyes of the law yet, in the eyes of God. And you’re also my guardians.” She furrowed her brow. “Why?”

“Because,” Nigel said, and nodded at his friend as he spoke. “I believe there must be consequences for your running away the other night. Even if you were running away for what you thought was our benefit, the truth is you put yourself in danger, and that’s a punishable offense.”

“You mean to punish me after what we shared?”

“He’s right,” Cody said, pulling her forward and pushing her across his lap. “You could have been killed, and you’ve complicated things for us by exposing your presence as a woman in the camp. Don’t you think you deserve a spanking?”

She looked back, her eyes swimming in tears, and Nigel thought she was the prettiest thing he’d ever seen, lying there over his friends lap. Cody had raised the hem of her nightgown, baring her round bottom. As he rubbed his hand over the springy mound of flesh, Nigel realized that living like this would require self-discipline. He would always want to be the one spanking or fucking the beautiful woman he and his friend shared, but he knew they would always find that balance—for her.

“Ow!” Cody had begun to spank her, his hand rising and falling to leave palm prints blooming in their wake. Jenny kicked her legs; the sweet little mouth that had been moaning earlier was now opened in a childish bawl as she sobbed aloud, her eyes scrunched tight.

“It hurts! It hurts!” She was bucking over his lap now, her legs gaping as she kicked. The inside of her thighs was sticky with their dried seed, but she was shameless in her flailing and Nigel wondered if Cody’s cock was as hard as his had become.

After her bottom was a dusky pink, the cowboy stopped.

“Are you going to be a good girl?” he asked.

“Yes, sir!” she wailed, still writhing on his lap. Nigel shifted in his chair to accommodate his rock-hard erection. The sound of her submissive tone alone was enough to have him nearly unmanned for the second time that morning.

2015-09-27
+admin
Previous: The Doctor’s Pet by Loki Renard
Next: His World, His Rules by Jasmine Haley Adams