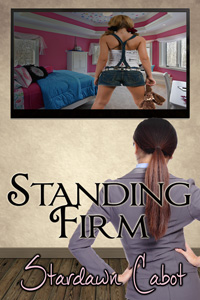 Twenty-four-year-old Morgan Fox wonders if her life is over when she is forced to return to US soil after losing her leg in Afghanistan. Things take an unexpected turn, however, when she lands a job as a bodyguard for Dakota Summer, an eighteen-year-old television star, and quickly realizes that her Army training did nothing to prepare her for dealing with the spoiled teen’s disregard for rules. Her job description is to keep Dakota away from the party scene and out of the news, but when Dakota refuses to obey her, Morgan can find only one way to make the teen pay attention: a good, hard, bare-bottom spanking.

Dakota’s life began spiraling out of control after her older brother died in a car accident, and it is only under Morgan’s firm hand and watchful eye that she truly starts to heal. She also begins to realize what she’s been missing: someone who will care enough to put a stop to her dangerous behavior. Dakota finds herself oddly at peace as she suddenly faces real consequences for her actions, even when those consequences leave her with a red, stinging bottom.

The women soon become friends, and although Dakota continues to push her bodyguard away and test her boundaries, Morgan stands firm, refusing to let her behavior go unpunished. When Dakota tells Morgan that she’s falling in love with her, though, the older woman is suddenly at a loss. Dakota has allowed Morgan to bare her bottom and spank her until she’s sobbing, but can Morgan let herself be vulnerable enough to embrace Dakota’s love for her, in spite of the insecurity she feels as a result of her injury?

“Tell me why I’m going to spank you.”

Dakota shifted nervously from foot to foot. “I, ah, I snuck out.”

“Um, I snuck out as Candice, putting myself in danger, and well, I’m sorry,” Dakota blurted out, again shifting from one foot to the other.

“I’m glad to hear that,” Morgan nodded. “And, yes, that is exactly why I’m going to spank you. You were naughty. You snuck out of a second story window no less, and put yourself in danger not only by leaving, but by leaving in a state where someone could have recognized you. You could have been hurt, in danger, or at the mercy of paparazzi. Do you really want to make the cover of the Inquirer again?”

“Good. Then I want you to remember how you feel right now and think about how your backside is going to feel in a moment, because I don’t want something to happen to you just because you decide you need to throw a fit.”

With the end of the lecture, Morgan let go of Dakota’s hands before wiggling her pajama bottoms down to her knees. Dakota blushed, but didn’t interfere.

Morgan took one of Dakota’s hands and led the teen over her lap, adjusting her slightly before wrapping one arm securely around her waist. Resting her open palm on her backside, she said, “I don’t like doing this, Dakota, but I will because I care about you. And I won’t hesitate to do it again if I need to.”

With that, Morgan pulled back her hand and let if fall with a resounding crack. The sharp sting of the swat caused Dakota to gasp and fidget almost immediately. By the tenth swat, Dakota was moaning and squirming. By the twentieth, she’d put a hand back, which Morgan had neatly caught and then pinned to the small of her back. When this happened, Morgan paused and readjusted her grip.

The next twenty were fast and furious, and Dakota was howling by the time that fortieth swat was reached. Readjusting one last time, Morgan slowed and made the last ten swats count. Letting go of Dakota’s hand, Morgan then proceeded to rub Dakota’s cherry-red cheeks as Dakota cried into her other arm.

2014-02-16
+admin
Previous: The Girl, The Doctor, and the Texas Ranger by Sue Lyndon
Next: Taming Megan by Natasha Knight