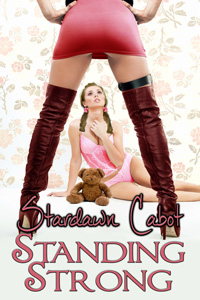 Nineteen-year-old actress Dakota Summer was in desperate need of boundaries… until she met Morgan Fox and the bratty starlet found herself over the no-nonsense army veteran’s knee learning that naughtiness has consequences. Morgan’s firm hand proved to be just what Dakota had been missing in her life for so long, and they quickly grew close, first as friends and then as passionate lovers.

Though she is now much more than just Dakota’s bodyguard, Morgan knows she must still guide and protect her feisty little girl, and when a stalker sends Dakota a cryptic, threatening note alluding to her brother’s tragic death in a car crash, Morgan decides to leave home for a while and take Dakota to meet her family.

Dakota’s defiant behavior is at an all-time high in the days before their trip, and even when Morgan makes Dakota wear her cute little girl panties to keep the willful teen on her best behavior, she can’t seem to stay out of trouble. It soon becomes clear to Morgan that Dakota needs to know she will always be held accountable, and if that means a long, hard, bare-bottom spanking which leaves her sobbing and remorseful, then so be it.

At the same time, Morgan realizes that in order to discover the truth about her brother’s death, Dakota must have the freedom to make her own choices about the investigation. Even as their relationship evolves, can Morgan and Dakota stand strong and discover the truth together?

Dakota looked down at the floor. “I was trying to sign up for an online traffic school class.”

“So you could pay the fine and just take the class without me being any the wiser.”

It wasn’t a question, and Dakota could only sniffle. It didn’t get any better as Morgan grabbed her arm and pulled her closer. Her adorable black and white skater skirt suddenly wasn’t as cute as Dakota found it flipped up over her back just a second after Morgan pulled her over her knee.

Dakota didn’t even have time to contemplate the merits of never wearing a skirt again before she was suddenly staring at the carpet and yelping as Morgan’s hand made sharp contact with her panties. Nineteen more crisps spanks followed, although Dakota would have sworn it was more like a thousand.

Suddenly righted, Dakota found one hand wiping away tears as the other tried to rub the sting from her backside. She could only sniffle as Morgan pointed a warning finger at her.

“That,” Morgan started her lecture, “was for trying to be sneaky. We are going to have a long talk about this tonight, but right now we have a party to get to.”

“Too bad. Everyone is going to be there and they all expect you to be as well. You know what a big deal these end-of-the-season wrap parties are. You’re the star, Dakota, you can’t miss it.”

Dakota frowned and rubbed again. “Can I at least put some pants on?”

“I don’t think so,” Morgan quickly answered. “I like the idea that I can access your backside or thigh” she paused and gave Dakota a half-hearted swat to the back of her closest thigh to illustrate, “in case I need to. I expect you to be on your best, and I mean best behavior tonight, Dakota.”

Dakota nodded, chewing her lip and trying not to start crying again as she knew that Morgan wouldn’t hesitate to pull her back over her lap. Letting her lip slip into a pout, however, she realized she was missing something. “Morgan, are you really mad at me?”

“Disappointed,” Morgan sighed. “And not so much that you got a ticket, although we’re going to talk about that, but rather because you lied and tried to cover it up.”

Dakota hung her head. “Can I at least have a hug?” she managed after a long moment of self-pity.

Morgan didn’t need to be asked twice. She reached out and easily pulled Dakota into her lap. Squeezing her tightly, she also kissed her soundly. It was just what they both needed. After Dakota settled, Morgan let her slide back onto her feet before she lifted her skirt again.

This time though she lifted the front, rather than the back, and Dakota blushed as Morgan’s hand ran down the front of her navy blue lace panties and settled between her legs. Dakota shifted in embarrassment as Morgan suppressed a smirk when she found them obviously damp from Dakota’s excitement.

Giving her a look, Dakota blushed. “I can’t help it.”

“I know, but maybe I can. You still have those Hello Kitty panties from Vegas, right?”

Dakota’s face fell, giving Morgan all the answer she needed. “Since you’re so interested in childish behavior, I want you to take these off and put a pair of those on. Then you can find a corner for a bit.”

“Yes, really,” Morgan emphasized with another swat. Although this one was over her skirt, Dakota got the message. She could only blush again as she hurried to follow Morgan’s directions as her lover watched.