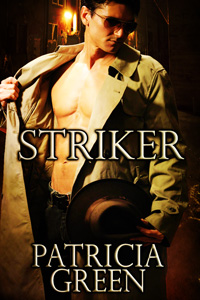 Detective Jase Striker doesn’t want a partner on the job, and when he’s saddled with Angelica Piccolino—a rookie in the homicide division—he’s more than a little annoyed. But his irritation with his sexy new partner soon morphs into a blistering passion, and though he fears what mixing work with pleasure will do to his crime fighting abilities, she soon proves irresistible.

Despite her diminutive size, Angelica is no stranger to the streets, and at twenty-six years old she’s tired of being treated like a kid. Yet somehow, when her attitude pushes Striker too far and he takes her over his knee for a bare bottom spanking, it merely leaves her desire for him burning even hotter.

Forced to work together as a team, Striker and Piccolino must race against time to hunt down a serial killer whose only calling card is a white rose left with each victim. Can they bring the white rose murderer to justice before another victim turns up?

“I’m not interested in your orders at this moment.”

“Or what?” She snatched my sunglasses from my pocket, dropped them on the ground and then stomped on them. They crunched.

That ticked me off. I took her by the arm and led her back to the car, pushing her into the back seat when we got there and following her in.

“What’s the matter with you?” she railed. “I thought we were going to go to Camilla’s apartment.”

“We have something to do first.”

“No, we don’t!” She tried the back door on the street side and found it locked. It was my personal vehicle, a family car that came with annoying child guard locks on the back which couldn’t be opened except from the driver’s console, the outside, or with the key fob. She tried climbing over me to get to the rear curbside door. Maybe she thought it would unlock easier. However, it put her in the perfect position for what I had decided on the spur of the moment. I grabbed her by the waist and positioned her over my lap. Her perfect little behind turned up in my direction.

It was time to make her bratty behavior a thing of the past. Of course, that’s what I’d thought with the first spanking, and that hadn’t exactly toned her down. Unfortunately, apart from yelling at her—and getting a lot of yelling and cursing back—it was my best option. Besides, I liked spanking her. It calmed us both down and centered us, at least for a little while.

I took a quick look out the windows and saw that no one was around, then pushed the skirt of her dress up over her hips and took a deep breath. Memories of our night together flooded my brain and expanded my cock. But I had to remain cognizant of the purpose of this spanking, the reasons behind the punishment.

I touched her bottom with a lover’s caress only once, then lowered her bright yellow panties. She struggled and cursed me, but I didn’t relent.

The shoulder holster under her suit jacket poked me in the knee; I ignored it. Fact was, she could have shot me if she got mad enough, but I didn’t think she’d go there. It was a risk I was willing to take. So I laid into her butt with some well-placed swats. Not little warm-up love taps, either.

She screeched. “Hey! Knock it off! Ouch!”

I spanked her a few more times, despite her protests. Her pretty ass started turning that cotton candy pink I found so appealing.

“Act like a brat, get treated like a brat.” My hand rose and fell half a dozen more times while she squirmed and squealed. Her bottom had taken on a brighter shade of pink. I was going for red.

I peppered her rear for a minute longer, and, although it wasn’t big of me, I totally enjoyed watching her discomfort. She deserved to be treated like a wayward child. Her behavior was childish, no matter that she was tired and grumpy.

“Please! I’ll try to control myself. Enough. I’ve had enough.”

I didn’t think she’d really had all she deserved, so I spanked her half a dozen more times. I could feel the heat coming from her struggling body and the heat on my hand and her butt. The red splotches were rising on her globes, and I knew that I’d finally made an impression.

I gave her one more mighty swat and then stopped. She sniffled and squirmed back to the seat next to me, adjusting her panties and skirt as she went. “And you owe me for my Ray-Bans,” I told her.

2015-05-23
+admin
Previous: The Highlander’s Little Lass by Ava Sinclair
Next: A Punishment Exam for Jane by Emily Tilton