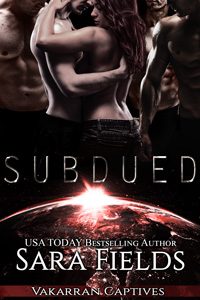 They hunted her. They caught her. Now they will subdue her.

The resistance sent them, but that’s not really why these four battle-hardened Vakarrans are here.

They came for me. To conquer me. To master me. To ravage me. To strip me bare, punish me for the slightest hint of defiance, and use my quivering virgin body in ways far beyond anything in even the very darkest of my dreams, until I’ve been utterly, completely, and shamefully subdued.

I vow never to beg for mercy, but I can’t help wondering how long it will be until I beg for more.

Publisher’s Note: Subdued is a stand-alone novel which is the fourth book in the Vakarran Captives series. It includes spankings, sexual scenes, intense and humiliating punishments, and strong D/s themes. If such material offends you, please don’t buy this book.

The stretching sensation burned as he took my virgin hole with his finger for the very first time. His digit was thick, and I felt its girth as he breached my back channel. I squirmed, but it was no use as he took me there, just as his cock pushed into my pussy. With him staring in between my legs, I couldn’t hide the reactions of my body as he took me in such a shameful way.

As his finger pushed into my bottom hole, my pussy clenched down around his cock. He’d know I was enjoying this filthy act. There was no denying that now and he knew it. Slowly, he drew his hips back and then pressed forward, teasing me, torturing me with his dick.

I moaned with humiliation as his knuckle pushed past the tight ring of my asshole, just as Tavik pinched one nipple, hard. Zane threaded his fingers through my hair and pulled hard, forcing my cheek down to the ground. I moaned, low in my throat and closed my eyes, just as Caleb’s hips surged forward, claiming my pussy with his cock in one fell swoop.

He fucked me just as hard as the others. If I had expected him to be gentle, he wasn’t. One finger turned into two, pushing into my ass unmercifully even as I cried out. I wasn’t sure what I was saying anymore. I wanted it to stop. I didn’t want it to. I was ashamed. I was aroused. I was so confused.

My body hummed with pleasure. My skin electrified with it. These men had taken me roughly, taught me a resounding lesson with both their palms and their cocks and I would never forget it. In fact, I knew my life would never be the same again.

Caleb’s hips rolled, and the tip of his cock rubbed against a glorious place inside me and my entire body went rigid with ecstasy, even with his fingers in my ass. Especially with his fingers there.

It was shameful. It was filthy, but so fucking good.

My orgasm rushed over me, strong and steady and all-consuming. He captured my body and wrenched every second of pleasure from me that he could. The hands of the other three men brushed over my skin and I was completely and utterly lost.

Zane pulled my hair hard. Tavik pinched my muscles roughly and Valdus caressed the skin of my neck. He leaned forward and pressed his lips to the curve of my throat and I moaned softly. Caleb fucked me hard from behind, his fingers pumping in and out of my bottom and there was little I could do to fight the rampant lust racing through my veins.

Caleb still had his fingers in my ass. He pushed them in and out, stretching my asshole and reminding me that at that moment, he was in complete control and I was not.

I heard him fiddle with his belt and then he finally pulled his fingers from my bottom hole. Only a second later, something pressed against it.

“What is that?” I whispered, my voice rising with anxiety.

“It’s a plug for your naughty little asshole. You’re going to wear it while we explain why we’re here in the first place. It’ll be a lesson for you to think before you act, because if you misbehave, you’re going to regret it,” Caleb explained.