Summoned for Discipline by Jane Fairweather 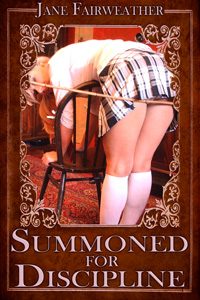 Summoned for Discipline contains nine short stories in which young women find themselves facing the prospect of traditional corporal punishment at the hands of various authority figures.

In an American boarding school on the eve of the Pearl Harbor attack, the paddle proves the simplest way to deal with an unpleasant, troublesome quarrel between feisty senior girls.

The Cane on a Rainy Day

A rainy day in England when the headmistress is already in a bad mood turns out not to be the best time for a young lady to break school rules.

Jennifer learned the hard way that it is not wise to be caught fooling around with a boy while still at boarding school, but years later she has come to view the incident in a very different light.

A Question of Law

When a young miscreant is accused of stealing from her classmates, will the police and courts need to become involved or can the matter be handled unofficially by her school?

The Princess and the Agent

An exiled princess poses as a student in an old-fashioned boarding school while in hiding from her family’s enemies, but will she be subject to the same rules and discipline as the other girls?

Though Natalie’s housemistress is fond of her, rebellion and rudeness cannot be tolerated, and when she pushes things too far Natalie finds her bottom bared for a painful chastisement.

A fight between two sisters leads to a caning for the instigator, even at age eighteen, but the punishment reminds her mother of an incident which took place while she was still in school.

After her carelessness results in her school group being thrown out of an art gallery, a young lady is taught a firm lesson in the headmistress’ office.

Though she is used to strict discipline in her very traditional American family, when Katie defies her rich, snobbish aunt the results turn out to be quite different than she would have expected.

Publisher’s Note: While many of the stories contained in Summoned for Discipline share a school setting, it is made clear in all of them that the characters are over the age of eighteen. In addition to depictions of corporal punishment, some of the stories also include sexual scenes.

There was a knock on the door. It was six o’clock, the time for punishments, so it was unlikely to be anyone other than the Princess. Mary quite genuinely did not like having to use the slipper, but there it was neatly laid out on her desk, a dark piece of leather that had almost ceased to be a slipper from its frequent use and gave quite a sting if wielded with the right timing. She glanced back at it, double checking it was definitely there, before striding to the door in real anger. Why had the girl behaved so stupidly? She flung it open. It was indeed the Princess.

“You had better come in, Gillian Smith,” she barked, thinking she must say nothing to suggest this was anything other than a normal punishment of a senior girl, who was extremely lucky to be getting off with just a slippering.

“Why did you do it, in God’s name?” Mary demanded after the door was shut. “You must have known you were putting your time here at risk, and with it your own safety.”

“I got bored, Mary,” said the Princess with a lazy smile. “And why shouldn’t I smoke. I like smoking, yes.”

“For a start, Gillian Smith, while you are in this room I am Miss Swallow and I am your housemistress. And if while a pupil of this school you flagrantly break school rules it is my duty to punish you. Take off your gym slip. Now, Gillian Smith, or shall we have some of your fellow pupils in to take it off for you.”

“I did not think you would really do it, Mary, I mean Miss Swallow,” the Princess said pitifully. “I thought we would just pretend. Can we not pretend, please?”

“No, we bloody cannot pretend!” said Mary, getting even angrier.

The gym slip was very reluctantly removed. Black stockings overlapped the rather full knickers, which were considerably more stylish than was allowed, even to a senior girl. Mary almost took note of the fact, then decided this punishment was going to have to be extremely severe anyway and she could not face adding to it.

“Bend over and put your hands on your knees,” she said briskly.

There was a distinct pause, then the victim said, “Please!” very desperately. However, faced with dour silence from her executioner, the Royal back bent and the Princess’s hands gripped at her knees, rather hard, Mary noticed.

Mary picked up the slipper and slapped her own hand with it. She did not hit herself that hard, but it still stung. The Royal knickers were thin and she wondered for a second whether to leave them, but then decided that this punishment most definitely required the considerable humiliation that went with a bare bottom punishment; apart from anything else the other girls would expect it. She walked up behind her victim and lowered the immaculately cut knickers slowly and deliberately till they formed a white band just above the knees. A band, Mary reflected, that should make any resistance that bit more difficult. The victim did not say anything, but began to weep copiously.