Surrendered on the Frontier by Jane Henry 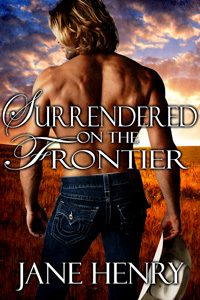 After the untimely death of her harsh, overbearing husband left her a widow at the age of twenty-three, Ruth Watson vowed that she would never depend on a man again, let alone submit to one. The hard world of the frontier is no easy place for a woman to make her own way, however, and when the tough, handsome Samuel Stanley takes it upon himself to look out for her, Ruth is ashamed to find that a part of her longs to surrender to his firm but loving dominance.

Though Samuel itches to tame the headstrong Ruth, he is able to hold himself back until she loses her temper and hurts her best friend. Seeing her riddled with guilt, he at last puts the beautiful little spitfire over his knee and spanks her hard and thoroughly. The stern punishment leaves Ruth not only properly chastened, but burning with passion as well, and when Samuel takes her in his arms she yields completely to his mastery of her body.

Samuel makes it clear that from now on Ruth’s impetuous behavior will have consequences, but in her heart she wonders if he will grow tired of protecting her from both herself and the dangers of the frontier. Can she bring herself to trust him to be the man she has always needed, or will her fears bring an end to their blossoming romance?

Publisher’s Note: Surrendered on the Frontier is a stand-alone sequel to Claimed on the Frontier. It includes spankings and sexual scenes. If such material offends you, please don’t buy this book.

He seemed stronger and sterner, and the memory of just moments before being laid across his lap caused a pulse of excitement in my chest, which only continued to rise as he went on.

“I’m tellin’ you this, young lady. I spanked you once, and it was what you needed. This time, I asked you to grant me that permission. And you did. Now I know you won’t feel harmed like you did before, when you were mistreated. I’m holding my little Ruth in my arms, after gettin’ her little bottom spanked, as meek and calm as a well-fed kitten. I’ll expect you to behave yourself goin’ forward. If you don’t, I’ll not hesitate to bring you straight across my knee again.”

I closed my eyes, overcome with my need for him, the words causing me to shift and squeeze my thighs together. At the very same time, I felt relieved. He wouldn’t let me carry on like a shrew, and he’d be here to pick up the pieces when I faltered.

“I understand,” I said, wanting to thank him but still feeling self-conscious about it.

His eyes darkened. “And if you ever pull some of the stunts you’ve pulled this week, the next time I spank you, I’ll spank your bare bottom, little lady.”

“Well, now, let’s not get carried away,” I responded, though my heart thundered in my chest and I smiled at him. His lips quirked up. He placed his hands under my arms and heaved me further up his chest.

His lips met mine. I closed my eyes. I was in the presence of a stern, uncompromising man, so strong and kind, bearing the mark of his hand upon my skin. Now I wanted to be owned by him in every possible way. I wanted to be claimed, and mastered, filled with nothing but him. His hands went to my face and he held me as our kiss deepened, hot as blazes, flaming my need for him. My thighs shifted beneath my skirts, and I remembered his hand between my legs. I needed more of him.

As we kissed, his hands made their way to the back of my dress. It was simply sewn, with few buttons. He gathered up my skirts as he sat up, lifting me and turning so that now I lay flat on my back and he above me. It was then I noticed his arousal tented in his trousers. It pleased me.

His hands spanned my waist. I needed more.

I placed my hands flat on his chest, feeling the strength beneath his shirt.

What happened next was a blur of passion and heat, as I fiddled with my layers of clothing and he unbuttoned his shirt. We both knew what we needed. No words were necessary. When I was bared to him and he to me, he lowered himself back down to me again. The feel of his naked skin against mine flared my arousal again. I could still feel the sting in my backside against the quilt, the throbbing need for him, and his hardened length between my legs as he kissed me. I longed to feel him inside me.