Surrendered on the Frontier Grabs a Top 100 Spot 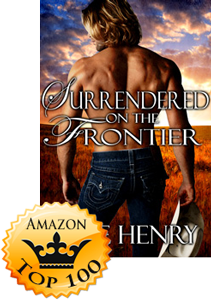 Jane Henry‘s latest release, Surrendered on the Frontier, has made the Top 100 in Amazon’s Western Romance category! Congratulations, Jane!

★★★★★ A. Smarts @ Amazon.com “Highly recommend!” on September 18, 2016
Fantastic story! Jane Henry has written another wonderful western full of domestic discipline and romance. If you liked reading about Pearl and Aaron in Claimed on the Frontier, you’re going to love Samuel and Ruth. Samuel is such a great character. The gentlest of the Stanley brothers, he is the perfect mix of firm and kind, which is just what a heroine like Ruth needs after her abusive first marriage. The secondary characters like the youngest brother Matthew and Ruth’s daughter Hannah add humor to the story, as does the snooty sister-in-law who gets Ruth into trouble. One thing I really enjoyed about this book was the appearance of Aaron and Pearl from the first book. This author really gets to know her characters, and they always act true to themselves, creating a very realistic read. When Aaron and Pearly entered the story, I felt like I was visiting old friends. Don’t hesitate to one-click this fast-paced, riveting, super-sexy spanking romance. You won’t be sorry!

★★★★★ Lisa D @ Amazon.com “Wonderful book that I couldnt put down!” on September 17, 2016
Jane Henry has done it yet again. This book could easily stand on its own as the characters are in depth but why would you want to? If you loved her first historical romance about Aaron then you will swoon over Samuel! Ruth was married once before to a cruel man and so its about her journey with Samuel in trusting him with not only her heart but her submission as well. She is a definite handful for him but luckily thats why he has two hands! He meets her challenges head on with just the right amount of love, understanding and trips over his knee. Great weekend read and you wont be disappointed!

★★★★★ RedRabbit @ Amazon.com “WHAT HAPPENS AFTER TWO FRIENDS BECOME LOVERS?” on September 18, 2016
WHAT HAPPENS AFTER TWO FRIENDS BECOME LOVERS?
The story reads as a standalone but is a continuation from Claimed on the Frontier, where we met three of the Stanley brothers along with Pearl as they travel to their new homestead to join Ma, Philip, and Geraldine. Ruth Watson is widowed at only twenty-three years of age and has an eight-year-old daughter, Hannah. Her life has been nothing but hardship and cruelty at the hands of her father and then her late husband. Having suffered beatings and abuse at the hands of the men who should have loved her, she has vowed not to allow another man into her life again and has been struggling on her own. Samuel Stanley admires little Ruth, but her stubborn streak and headstrong ways need to be tamed, and he believes he is just the man to tame her.

The plot is full of the hardships of the frontier, nightmares lingering from past abuse, fear of troublemakers in town, trying to do the best raising a child, and bearing the weight of the world on small shoulders. Just like a wounded animal strikes out even when someone is only trying to help them, Ruth is a wounded soul, and she has been hurt most of her life and fear leads her to strike out to those who are only trying to help her and are really her friends. Samuel cares for Ruth, and he is determined to tame this lost and hurting women, even from herself. The story is full of angst, anger, bitterness, confusion, desire, need and passion, but sometimes, it comes with a price, and for Ruth, that will be in the form of correction from Samuel. There is a great cast of characters and entertaining dialog. The dominate Stanley men know when to be firm when to be gentle, and when to take their naughty girls in hand. Disclosure: I received an e-copy of this book in exchange for an honest review. All thoughts, opinions, and ratings are my own.

★★★★★ Krissyre @ Amazon.com :A strong woman, and an even stronger man!” on September 21, 2016
After reading the first book in this series, Claimed on the Frontier, I fell in love with the Stanley brothers and their family. I also found my heart breaking for their neighbor, Ruth, who had overcome so much adversity with her awful first husband. I was beyond thrilled to learn that Ruth would return in this book and get her chance for a happy ending!

But that happily ever after isn’t a given! After years of abuse, widowed Ruth has learned to be strong and independent. She won’t deny her attraction to Samuel (a magnetic attraction that crackles and sparks and fairly leaps off the page!), or to the firm and consistent discipline he provides, but she understandably struggles with the idea of giving a man power over her. Only after lots of heartache and soul searching does Ruth learn that sometimes a strong woman needs man who is “just that much stronger than she is”!

This is a relatable, emotional, and undeniably sexy read that left me dying for another Stanley brothers book!! Highly recommended!

★★★★★ Heart5 @ Amazon.com “Great Story” on September 19, 2016
I really liked Claimed on the Frontier, and definitely felt it was worthy of five stars, but I think the author has somehow managed to improve on the series with this second book. This one focuses on Ruth and Samuel. Ruth has never really known love, she traded an abusive father for an abusive husband. Samuel is the gentlest of the Stanley brothers, but no less alpha than his brother Aaron. He knows he wants Ruth, but is afraid of scaring her away because of the abuse she faced with her ex husband. When he finally decides to throw caution to the wind and plow forward with Ruth, it makes for one hot, but still very sweet story.

This is the first book that I have read in a while that I literally could not put down. The author set each scene with so much detail it was really easy to visualize this much simpler time. Both of the main characters were very well developed and very likeable. Just like in the first book, I felt a connection to each member of the Stanley family. My only wish is that there were more Stanley brothers so this series could go on longer.

★★★★★ Laurel @ Amazon.com “Wonderful Adventure Romance on the Frontier by Jane Henry” on September 20, 2016
This is a continued story of Claimed By The Frontier but can be read as a standalone story. If you like romance, domestic discipline, adventure, horrible past with abuse and much more, then this is a book for you. I absolutely loved it. The insights into the characters was beautifully written and explored the feelings and emotions of the characters which helped me to understand how past life experiences can keep me in the past and avoiding the future. That’s what happened to the heroine. Does she get past the early life with an abusive husband? Does she embrace the future? These and other questions will be answered if you read this book. I was given an Advanced Reader Copy by the publisher for an honest review and the thoughts and opinions are mine.

★★★★★ AmazonAddictedMommy @ Amazon.com “sexy, gentle but strict Dom” on September 19, 2016
“Young lady, you’re in trouble the likes of which you’ve ever known.” Jane Henry has written another amazing frontier story that’s full of stomach dropping warnings like that one. The heroine is a sassy mother with history of abuse, Samuel k rows that and is hesitant to provide her with the guidance he knows she needs, but he’s eventually pushed to his limits when she literally asks for punishment. Very sexy, very well written book with a fantastic Dom who’s the perfect balance of gentle and strict. I received an Advanced Reader Copy of this book from Stormy Night Productions.

★★★★★ D.S.Taylor @ Amazon.com “A SUPERBLY WRITTEN LOVE STORY! DESERVING OF EVERY STAR!” on September 20, 2016
I bought this on Amazon.ca. I read the first in the series and loved it (HUGE JANE HENRY FAN), but I LOVED this one even more!!! Samuel is a wonderful character(perfect man *sigh*) who always puts Ruth’s needs first. His sweet stern ways were absolutley perfect through the entire read! Ruth is complicated and tests Samual every step of the way so seeing these two overcome their challenges was a journey I adored from start to finish. Of course seeing good old Aaron and Pearl again was wonderful, too! A superbly written love story, with plenty of spankings and steamy scenes! A book I will enjoy many more times!!

★★★★★ Lynette @ Amazon.com “Strong and sexy here!” on September 21, 2016
Although it took me a few chapters to get into this book, it turned out to be a pretty good story. Ruth and Samuel were well suited and truly cared for each other even though it took them quite sometime to admit it. Nothing like a strong man to watch over you in the wild frontier! lol I also liked all the supporting characters, especially Hannah, she’s a pistol!

2016-09-24
+admin
Previous: Surrendered on the Frontier by Jane Henry
Next: Bride of the Trogarians by Ava Sinclair