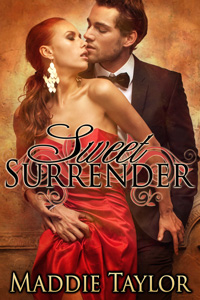 Abandoned by her father at a young age, Jessie Swanson swore she’d never again depend on any man, let alone someone with Dr. Marc Trent’s reputation as a player. Upon being assigned to work a shift as Marc’s nurse, she vows to keep things entirely professional, but when the darkly handsome surgeon asks Jessie to dinner her promises prove no match for his golden-brown eyes.

One date turns into another, and then another, and the better Jessie gets to know Marc, the more his take-charge personality appeals to her. She soon finds herself craving his dominance in the bedroom as well, and when he takes her over his knee, bares her bottom, and spanks her long and hard, she is left blushing and begging for more. But after Jessie learns that Marc’s mother and sisters are unhappy about their match, she retreats into her work, sure that a girl who used to call a trailer park home can’t possibly have a future with someone like him.

When Marc puts his foot down about Jessie’s excessive overtime hours and her failure to take care of herself properly, things come to a head. Jessie decides to move on rather than risk losing her independence to a man she fears will one day cast her aside, but Marc doesn’t give up easily. Will the wounds of Jessie’s past keep them apart forever, or can Marc prove to her that he is not only a man she can depend on, but one worthy of her surrender?

When he grasped her wrist and pulled her out of her chair, she gasped. Finding herself belly down and ass up over his lap the next moment, she stiffened. It wasn’t until he tugged her skirt up and her panties down to mid-thigh that she cried out in alarm. “Marc!”

“You, cara mia, need a few lessons and starting now, I’m your teacher.” His hand came down and popped her ass with two sharp slaps. The sound bounced off the walls, echoing like gunshots.

“No?” Two more loud smacks followed. “It appears that I can. You’ve had your turn to talk, spouting your nonsense. I gave you your say. Now it’s my turn.” He peppered four more across her quickly warming cheeks.

“Ow! Let me up.” She wiggled and kicked, but his strength constrained her. Ripping fabric sounded next as her legs began to flail. It was her panties, which had slipped down her legs to her ankles while she struggled. He captured them easily and pulled them all the way off. He then hooked one of his legs over both of her own, pinning her without hope of going anywhere.

“I’ll let you up when I’m finished and you’re ready to listen.” As he spoke, he rubbed her warm and tingling skin with the palm of his hand, the fingers trailing lightly for a moment.

“I don’t think so.” Low and fluid, his voice was as smooth as his gentle massage. Both were soothing, calming her and despite her inelegant position, half-naked over his knee, she relaxed beneath his hand. It was then she noticed another warmth growing rapidly between her tightly pressed thighs. Unbelievably, she was aroused. Jeez-oh-Pete, she was getting turned on by a spanking, of all things.

Just when she thought he was done and ready to move on to what she’d been longing for, he spanked her more. Sometimes two swats, other times four, but always an equal amount on each side and followed by more gentle caresses. When his fingers grazed over the tender skin of her upper thighs, moving ever closer to her center, she stiffened.

Behind her, he shifted, lessening the weight of his restraining leg. He ordered in a deep, husky voice, “Spread your legs, Jessie.”

With the tip of one finger, he traced over the split of her cheeks, slowly moving down the midline until it disappeared between her thighs. “Mm… is there something here you don’t want me to see?”

Yes, she screamed silently. He’d see that she was soaking wet because she was more aroused than she’d ever been in her life. She was also mortified.

“Spread for me, Jess.” His finger delved between her lips, searching until she clamped them tight. His soft hum of disapproval preceded a flurry of spanks on her lower cheeks, at the curve where her bottom met her upper thighs. It stung more there and he set up a fiery heat across both legs before he paused. “I don’t like repeating instructions any more than I like hearing you put yourself down. Open. Now.”

Her pussy and ass were alive with sensation. Unsure whether from the spanks, or the caresses, or if it was all Marc, she was powerless to resist any further. Ever so slightly, her thighs parted.

2015-02-13
+admin
Previous: Under His Watch by Emily Tilton
Next: Taken by the Tycoon by Normandie Alleman