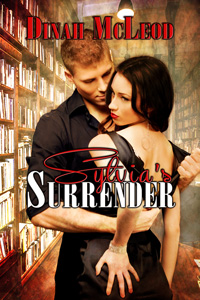 Five years ago, Jake Hastings threatened to spank Sylvia Hawthorne for misbehavior at the local bookstore, and it changed her life forever. Intrigued—not to mention powerfully aroused—by such brazen dominance from a stranger, Sylvia was more than happy to give herself to Jake that night. Upon discovering later that their passionate encounter left her pregnant, she made the fateful choice to keep her situation a secret from Jake, deciding instead to raise the child on her own. But when her now-five-year-old son is diagnosed with a rare disease and needs a bone marrow transplant, Sylvia is left with no choice but to swallow her pride and face Jake again.

She is prepared for almost any reaction from Jake… at least any reaction other than for him to step back into her life, ready to love and care for not only their son but her as well. To her shock, Sylvia soon learns that, in Jake’s book, taking care of a woman also means taking her over his knee for a long, hard, bare-bottom spanking when he believes it necessary. Yet despite his firm discipline, Sylvia soon finds herself falling for Jake in a way she never gave herself the chance to before. But will the same mistrust that kept them apart for five years ultimately destroy their new-found romance, or can Sylvia overcome her fears and surrender her heart to Jake?

My voice was hardly above a whisper, but he pulled me into a quick, hard embrace and kissed my forehead before echoing me. “OK. Let’s get this over with.”

“We can go somewhere, if you’d prefer, but I doubt you’ll be quite that loud.”

I hmphed noncommittally, but dropped my protest.

“I’m going to pull your dress up. This time, I’m going to paddle you over your panties. If there is a next time…” He left the words hanging in an unspoken promise.

“Give me your hand, honey. This spanking is going to be very different from anything you’ve felt before and I don’t want you trying to reach back and stop me.”

It was just looking better and better all the time. I splayed myself over his lap and gave him my right hand, which he quickly pinned on the small of my back. His words from earlier came back to me and I realized that my pussy was wet, despite the predicament I currently found myself in. For the life of me, I couldn’t imagine why, but something about feeling his hard thigh press into my tummy, the soft, caring way he explained how I would be punished… it all made me wet for him. Even when I felt him pull back the thin layer of my dress, I shivered.

If not for the damn paddle, it would have been almost romantic. I could almost close my eyes and pretend that he was doing this for other, more enjoyable activities… until I felt the first whack from the paddle descend on my butt. I was still sore from the day before, something I hadn’t realized until that evil hunk of wood worked its way relentlessly up and down my bottom.

There was no way I could keep count of the swats, though in the beginning I tried. By the time he made it to my thighs, I was kicking my legs and howling in protest. The wood imparted a terrible sting that crawled along my skin, burrowing until it felt like it had burst into flame. Each succeeding swat only served as fuel to keep it going.

Later, he told me that he’d only given me a dozen. It felt like hundreds, like an entire colony of bees had attacked my tender skin. I thought he’d permanently scarred my poor flesh, but in reality I wouldn’t find more than a small, fading bruise when I looked in the mirror the next morning.

When he pulled me up, I buried my face in his shirt, crying until it was past damp. Lately, it felt like all I did was cry on this man. It was more to his credit that he didn’t seem to mind.

“Feel better now?” he murmured when I’d calmed down enough to talk. Or at least to not babble incoherent apologies.

It never ceased to amaze me how much more relaxed I felt after a spanking, as though all the tension and fear I carried with me was dissipating more with each trip over his knee. A few more sessions with the paddle and maybe the wall I’d built around myself, the one I threw in his way to keep him from getting any closer, would crumble. The thought made me snuggle even closer.