Taken as His Pet by Sassa Daniels 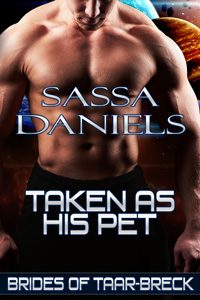 Desperate to escape the stifling confines of Earth’s repressive society, Lucy Bainbridge has only one hope. She proposes a deal to a warrior of Taar-Breck, promising to serve as his pet in return for passage to his home planet, but when the huge, fiercely handsome alien immediately orders her to strip and kneel at his feet, Lucy wonders if she has gotten herself in way over her head.

Though Taryn has been watching Lucy for some time, intending to claim her and bring her back to his world when the time was right, he wasn’t expecting the beautiful little human to make the first move. But now that she is his pet, she will obey or be punished more shamefully than she can imagine, and her beautiful body will be his to use as thoroughly and as often as he pleases.

Lucy is shocked by Taryn’s plans for her, yet as she is intimately examined, soundly spanked, and fitted with a tail, her helpless arousal cannot be hidden. Her need for him grows stronger with every blush and every quivering climax, but will Taryn ever see her as more than just a pet?

Publisher’s Note: Taken as His Pet is a stand-alone novel which is the third book in the Brides of Taar-Breck series. It includes spankings and sexual scenes. If such material offends you, please don’t buy this book.

“Are you refusing me?” He sat forward and put his hand under her chin, tilting it upward so she couldn’t avoid his eyes. “You understand what the consequences for disobedience will be?”

Lucy knew that her refusal to do as he wished, especially when there was another man present, would not go unpunished, but she couldn’t bring herself to lean forward and take his cock into her mouth. Eyes filling with tears, she shook her head once more.

Taryn’s response was immediate. He pulled her up from the floor and tossed her onto the seat next to him. Opening her bodysuit so wide her pussy and anus were exposed, he grasped the end of the plug that was holding her tail in place and pulled it from her bottom. She yelped, more in surprise than pain.

“Lift your knees to your chest and hold your legs apart,” he instructed her tersely.

Watching him with wary eyes, Lucy did as he commanded. Although this was deeply humiliating, she knew the consequences of disobeying him again would be severe. Her eyes widened as she saw him doubling over the tail and striking his palm with it, testing its effectiveness. This particular tail was soft and silky on the outside, but it was stiffened with a thin wire of some sort, so it could be curled upward. Realizing that he intended to use it to punish her, a shiver of dread slid down her spine. On her bottom, it wouldn’t have much impact but where he clearly planned to use it, well, that was another matter.

Her fears were brought to life as the first blow fell on her exposed pussy. It stung, but there was also intense pleasure as the fluffy fibers of the tail dragged along her sensitive slit. She gasped for air and only then did she realize she’d been holding her breath in anticipation of what was to come. With the second strike, she felt her clitoris began to pulse. This was sensual torture of the most exquisite kind. Pleasure followed pain, confusing her senses.

Lucy’s cheeks reddened as her heart pounded furiously. Her hardened nipples strained against the fabric of the bodysuit, the pressure only increasing her arousal. She did everything she could to remain still and quiet, embarrassed by the presence of the driver. The thought occurred to her that Taryn seemed to be harder on her when there were others around, but she had no time to consider why that might be as he struck her once more. She tried to hold back but could not prevent moans and whimpers from escaping her lips. Maintaining her position as best she could, she writhed beneath the lash of the silken whip as Taryn struck her again and again.

Her head thrashed from side to side as her need for release became almost unbearable. As the little noises she was making became more desperate, Taryn threw aside the implement of her erotic torment and ran a finger along her hot, wet flesh, sending a shudder right to her core. He plunged two fingers inside her and fucked her with them, taking his time, drawing out every ounce of arousal her body could produce. Lucy raised her hips, trying to take control, to pull him deeper into her quivering body. He pressed her down with a palm on her belly.

“You enjoyed getting your pussy spanked,” Taryn observed.

There was no point denying it. Lucy offered a long, low moan of desire in response. Just as the first spasms of pleasure gripped her womb, Taryn abruptly withdrew his hand. He quickly closed the bodysuit, picked her up, and deposited her on the floor to kneel at his feet once more. She couldn’t smother a groan of disappointment.

“Bad little kitties don’t get to come,” he told her. “Remember that in the future.”