Don't Miss
Home / Blog / Taken as Theirs by Kryssie Fortune

Taken as Theirs by Kryssie Fortune 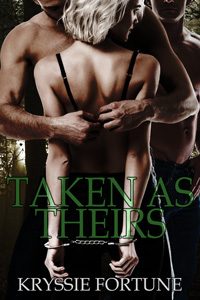 As a breeder—one of the few fertile women left in a ruined, plague-ravaged world—Cassie would fetch a handsome price at auction, and selling her to the highest bidder was exactly what her captors had in mind… until two fearsome beasts decided to take her for themselves.

Eli and Dane have chosen Cassie for their mate, and when she makes a foolish attempt at escape she quickly ends up tearfully promising obedience as her bare bottom is soundly and shamefully punished. Her body’s response to their stern dominance cannot be denied, however, and it isn’t long before she is screaming out her intense, helpless pleasure as she is roughly and thoroughly claimed. But will Eli and Dane’s pack accept a human girl or will Cassie be an outsider forever?

Publisher’s Note: Taken as Theirs includes spankings and sexual scenes. If such material offends you, please don’t buy this book.

He bound her wrists the way he had her feet. Bent over the barrel, she couldn’t close her legs, couldn’t move her arms. All she could do was accept his punishment.

He stroked her bare behind. “We agreed this was my night alone with you. I’d planned a romantic evening, but your behavior’s put paid to that. I promised you a spanking for your defiance. Are you ready, little human?”

She nodded, knowing the next half hour wouldn’t be pleasant.

Burying his fingers in her short curls, he forced her head up and stared into her eyes. “I need the words. Tell me what you did wrong and ask me to punish you for it.”

By now, she wished he’d get on with it. “I was foolhardy and put myself at risk. I swear not to do it again, but if I deserve punishment for fixing your broken valve, then please punish me, Sir.”

He released her hair and moved behind her. “Not the fulsome request I wanted, but yes, you do deserve punishing for it.”

Cassie shuddered. Bound over the beer barrel, she reveled in his mastery. Dane punished her because he cared about her, and she loved him for it. Her family had supported her, but as the oldest sibling, her parents had expected her to set an example. Dane and Eli accepted her, mistakes, imperfections, and all. There was something heady and wonderful about that.

Without warning, he brought his hand down hard on her rounded bottom. She screamed as the sound of his slap reverberated around the brew house. Hard as she tried to wriggle aside, her bonds held her too firmly.

He spanked both her sit spots in quick succession, so hard that tears filled her eyes. She wriggled her butt, trying to find some ease. His next two slaps landed on her the sensitive spots where her thighs met her bottom. She screamed and tensed, expecting him to hit her there again. Instead, he slapped her pussy.

As he spoke, he slid one finger inside her ass. She tensed at the intrusion. “No, please, don’t.”

He mantled his body around hers, so close his breath warmed the back of her neck and sent shivers down her spine. “This hole is mine, and when Eli and I claim you, I’ll fuck it hard.”

He slid his finger deeper, making her moan and pant. Her nipples pearled as she rubbed them against the top of the barrel. Her juices coated her pussy like hot honey that dripped onto her thighs. When he pulled his finger from her darkest hole, she moaned.

He chuckled. “You like that, little human? Enjoy it while you can, and remember, you brought this punishment on yourself.”

Dane moved in front of her, carved ginger in hand. Kneeling, he buried his hand in her hair and gently lifted her head, letting her get a good look. “Guess where this is going, my beautiful little slut. It will sting and burn, exactly the way the steam would have done if you’d got too close. Unlike the steam, this won’t do any lasting harm, but you won’t enjoy it.”

2019-01-06
Chris
Previous: Her Shameful Training by Emily Tilton
Next: Tamed on the Ranch by Delta James