Taken by Her Mates by Grace Goodwin 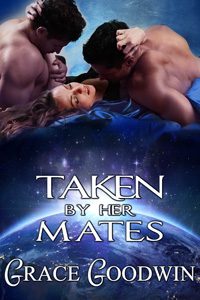 After being set up and found guilty of a crime she didn’t commit, Jessica volunteers for the Interstellar Bride Program to avoid a lengthy prison sentence. She is assigned to a prince, the heir to the throne of the powerful planet Prillon, but her future is left in doubt when the match is rejected by Prillon’s current ruler.

When his own father seeks to banish him and deny him his right to a mate, Prince Nial takes matters into his own hands. Accompanied by a battle-tested warrior who volunteers as his second, he sets out for Earth to take what is his, but upon his arrival he quickly discovers that the same horrifying enemies who once took him captive now hunt his mate as well.

Though believing she has been rejected by a mate she never even met stings more deeply than she would like to admit, Jessica does her best to focus on the dangerous task of bringing down the people who framed her. But before long, her world is turned upside down all over again when two huge, handsome aliens save her life and then inform her that she is their matched mate and they have come to Earth to claim her.

Jessica is far from ready to meekly submit, but she soon learns that her new mates expect to be obeyed and defiance will result in a painful, embarrassing spanking on her bare bottom. Despite her fury at such treatment, however, she cannot hide her arousal as she is stripped bare and thoroughly mastered by the fierce, dominant warriors. But when Prince Nial is forced to defend his birthright, will Jessica do what must be done to aid him, even if that means allowing his entire world to bear witness as she is taken by her mates?

“I warned you, Jessica. Now you will be taught what it means to defy your mate.” I lifted my arm and walked to the bottom of the table where her perfectly round bottom was on display, her legs spread wide and secured by the straps. I ran my palm over her smooth, round flesh in a soft caress to be sure she knew where I was, and where I planned to strike her. “I’m going to spank you now because you refused to listen. When it comes to your health or your safety, Jessica, I will not be denied.”

I met and held her gaze and she calmed her breathing enough to speak to me. “Don’t you dare.”

I struck hard and fast; her scream one of anger, not pain. “That’s one.”

“That will cost you another strike of my hand, Jessica. You’d best learn to watch your mouth.” I struck her in earnest then, turning her ass a fiery shade of red, deeply satisfied as her verbal barrage faded to silent rage, her pink pussy glistening with wet welcome as I inspected her folds, giving her time to adjust to her new position and accept me as her master, her true mate.

As expected, the pause in my lessons brought her fire back to the surface. “Is that it? Because if it is, you can fuck off now and let me up. I’m still not letting that doctor fuck me with his sex toys like a pervert.”

I met Ander’s gaze and nodded to be sure he knew to tighten his grip. Sliding two fingers into her wet pussy, I used the other to stroke her clit as I fucked her with them, bringing her to the edge, the peak of a release, before withdrawing. “This is just the beginning of your lesson, since you still speak to your mate with such disrespect.”

Her moan of anguished pleasure pleased me as I watched her pussy clench around open air, desperate for what I denied her. “You will count this time, Jessica. Count to twenty as I punish you for defying me. When we are done, I will invite the doctor over to continue his exam.”

2016-06-25
+admin
Previous: The Virgin Captive by Kallista Dane
Next: Taming the Mistress by Dinah McLeod