Taken by the Admiral by Sue Lyndon 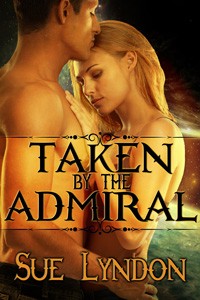 Since she was a child, Lia has longed to be free from the confines of the great worldship which has been the last refuge of the human race for generations, but being snatched from the only home she has ever known by aliens was not exactly what she had in mind. When she learns that the admiral of the alien fleet plans to claim her as his mate—regardless of her thoughts on the matter—her surprise turns to fury.

The huge and intimidating yet undeniably handsome admiral is unmoved by her protests, however, and her defiance merely earns her a trip over his knee for a sound spanking on her bare bottom. To make matters worse, the painful, embarrassing chastisement brings about a helpless, shameful arousal unlike anything she has ever felt before.

Having grown up in a society which abandoned sexual contact as a means of procreation long ago, Lia is deeply humiliated by the intimate, thorough medical exam she receives from the ship’s doctor in the admiral’s presence, and her failure to cooperate results in a stern punishment from her future mate. To cap it all off, with her bottom still burning and her cheeks blushing crimson she is brought to a shattering climax right there on the examination table to confirm her sexual responsiveness.

Though Admiral Cavvik hadn’t planned on taking a human female as his mate, he was left with little choice after one look into Lia’s eyes called up primal instincts that could not be denied. But when it becomes clear that some among his people are violently opposed to his choice of companion, will he stand his ground and protect the little human he has quickly grown to love?

She blinked rapidly to dispel her tears, but one trickled down her cheek anyway, and Cavvik caught it with his thumb and brushed it away. Tenderness for this human female resounded inside him, squeezing his heart and making his arms ache with the urge to wrap around her and rock her against his chest. But he was a male of his word. Lia had disobeyed, and he had to show her what happened to naughty little girls who touched themselves without permission.

“You belong to me, Lia.” He rested the tips of his fingers atop her clit. “Your pussy belongs to me. Do you understand?”

“Keep your legs spread wide. If you close your thighs, I will apply the strap to those pink glistening folds of yours rather than my hand.”

She nodded as a shudder ran through her, and he landed the first slap directly atop her protruding nubbin. Her eyes widened and she gasped.

“You were naughty, weren’t you, Lia?” Smack smack. He aimed the brunt of the blows atop her clit, and her gasps soon turned to cries of pain. She pressed her lips together and kept silent for a few moments, but it wasn’t long before she was gasping and crying out again as she struggled to remain spread and accept her punishment.

“Naughty girls who touch themselves without permission get spanked on their pussies, don’t they, little human?” The sound of his fingers lashing down on her wet folds filled the room as he smacked her again and again.

“Yes, sir,” she finally replied, her knuckles white from gripping her legs and holding herself apart. Her limbs shook and her breaths came out ragged. Perspiration glistened on her forehead and tendrils of her golden hair stuck to the side of her face.

Smack smack. “Are you learning your lesson, Lia?”

“Oh, yes, sir. I’ve learned my lesson.” Her legs closed slightly, but she immediately opened herself back up, parting her thighs wide to accept the punishment she had earned.

“Ten more. Spread wider. I want to see the insides of your naughty pussy lips.”

With a whimper, she forced her legs wider apart, revealing the inner pinkness of her privates. Her bottom hole rested beneath, her pucker clenching and unclenching with each new smack he delivered. He gave her the last ten slaps in rapid succession, centering them over her clit. As he sat back to admire his handiwork, his cock went impossibly hard at the sight of her bare pussy so wet, swollen, and red.