Taken by the Alien by Adrienne Blake 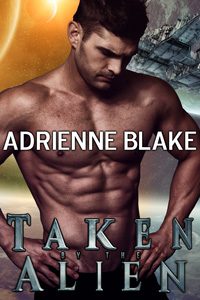 When waitress Kate Bennett was first taken captive by aliens, she was less than excited at the thought of being bared, spanked, and thoroughly dominated by the enormous, muscle-bound warrior Kandana. But the sexy brute’s mastery of her body soon proved quite a bit more pleasurable than she expected…

Then just when she was starting to hope he might stick around, Kandana decided his planet needed him and left Kate behind on Earth to pine for him while pretending to be over him.

Now he’s back, and she’s pissed. He thinks he can just barge into her life again, spank her, and expect her to beg him to claim her right then and there. Worst of all, he seems to be right, because soon she is writhing with intense, shameful ecstasy as he takes her harder than ever. But when he offers to bring her along to his world, will she tell him exactly where he can go?

Publisher’s Note: Taken by the Alien is a mostly stand-alone sequel to Tamed by the Alien. It includes spankings and sexual scenes. If such material offends you, please don’t buy this book.

Ken continued to rub her ass with his spare hand. The heat generated by his smack permeated his fingers and he breathed in hard, as if drawing some strange kind of power from the contact. For fun, and just because he liked the sound it made when his hand came in contact with her skin, he smacked her again, causing her to yelp.

“I could stop now if you wanted me to,” said Ken, though he knew what her answer would be before she said it. “Would you like me to stop, Kate?”

“You want more then?”

“What was that?” He pretended not to hear her.

Ken spanked her quickly. “You must say please when you ask for something. I believe this is the custom on your planet.”

He spanked her again. “I don’t think we’re communicating as we should, Kate. How do you address me?”

“Better.” He soothed her inflamed bottom by gently stroking her with his palm. He longed to open Kate’s legs and put his cock inside her, but tormenting her like this was just too delicious. And she deserved to wait, just as she had kept him waiting. And there were other ways he could punish her.

His attention went back to her ass, her round voluptuous bottom that molded to his fingers like dough.

“Well then, Earthling, it’s time I think you should get what you deserve.”

Ken pulled her right up close to his hips, and positioned his cock at her asshole, rubbing it around her flesh so there could be no doubt about what was coming.

But Kate didn’t wriggle or protest; instead she rocked with him, helping him keep his cock on target.

“Tell me you want me to fuck your lovely asshole,” said Ken. He held his rampant cock in his hand—it was granite stiff and now demanded direct attention. It had been denied for way too long.

“I would like you to fuck my ass, right now, Sir.”

2018-08-18
Chris
Previous: His Innocent Bride by Kryssie Fortune
Next: The Master by Ashe Barker and Katy Swann