Taken by the Aliens by Samantha Madisen 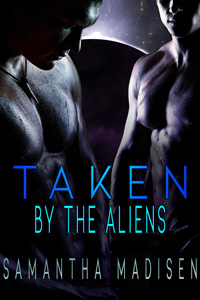 She came for a business deal. She ended up taken as a mate.

Mina Groza arrived on Astrogoda 9 as the representative of a major development corporation hoping to negotiate the purchase of a chunk of property, but instead of a hefty commission what she got was a very humiliating, very public bare bottom spanking over an alien warrior’s knee.

Things only got more shameful from there.

Now she’s naked, bound, and fully on display for two stern, sexy aliens intent on training her to please them in the most humiliating ways imaginable before claiming her as their shared mate.

Soon they’ll own the land she came to buy… and her too.

Publisher’s Note: Taken by the Aliens includes spankings and sexual scenes. If such material offends you, please don’t buy this book.

Was it hours, or days? She had no idea. It felt like an eternity. Mozok and Voso took turns pleasuring Mina until she was certain she would go over the edge at last, but they never allowed her to do so. At last, they released her from her shackles, but only to turn her over and place her in an even more submissive position. Her arms were stretched out in front of her, her bottom pointed up at the sky, her legs shackled together at the edge of the bed.

“In order to accommodate myself or Voso,” Mozok told her, “you will need to be trained. And so we will begin with the smallest of our tools, which you are to wear throughout the day. I am afraid it will most likely stimulate you constantly He trailed a finger down her spine, sliding through the feverish sweat on her skin before he swirled his finger around the eyelet of her ass.

He played with her hole, and Mina felt herself squeeze it tightly, even though she knew—she’d read books, after all—that she should try to relax. The memory of the public enema she had received washed through her body as a hot wave, goosebumps flashing over her skin as the heat faded.

She next felt a cool, wet sensation and the hardness of metal pressing against her. Her clit throbbed, craving stimulation, craving a final release from the torture they had just imposed upon her. The object stretched her hole, and for a moment there was a sharp pain, but it faded quickly as Mozok pressed the object in, filling her with a cool metal that warmed quickly. Soon, all she felt was the fullness that had so surprisingly aroused her before.

He moved the object around inside of her, pressing it many different directions. The stretching made Mina whimper in pleasure. Parts of her body that she had never thought much of began to heat up, to crave attention and the satisfying soreness of Mozok’s attentions.

The object was long, and it kept going in, on and on, getting wider, stretching her open. At last, a heavy, larger object stopped it from going further, snugly cupping her stretched anus with a heavy, satisfying weight. It was some sort of ball, she supposed, to keep it from being swallowed inside of her.

Okay, she thought, panting, shifting her weight around to accommodate the object. She had done it. She could handle it. The soreness in her ass actually felt… good. She would be okay.

Mozok had one more trick up his sleeve, however.

And that was a second object that he was slipping into the folds of her pussy. It stretched her open, rubbing against the membrane that separated it from the phallus in her bottom. The pressure was unbearably delicious. The phallus in her pussy was large—not as large as Voso or Mozok, but large enough to make her feel overwhelmingly full. Large enough to press against the root of her clit, promising to rub against it and bring her to climax…

“We shall leave you for a bit,” Mozok said.

Mina whimpered, twisting her ass in the air with futility, trying to move so that the two phalluses might somehow make her come… But they would not, she knew it. Her hands were bound and so were her ankles, and Voso was now affixing something between her knees, spreading them slightly apart.

And then, leaving her to her pleasurable torment, they left her.