Taken by the Alphas by Loki Renard 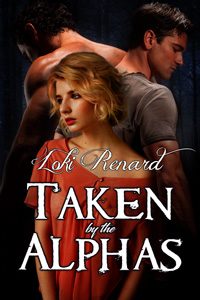 After an unexpected snowstorm buries her campsite, twenty-five-year-old wildlife researcher Addie Spencer is left scrambling for survival in a remote valley in the Alaskan wilderness. Exhausted and desperate, she takes shelter in a cave, only to witness a series of events so unbelievable that she promptly writes them off as a dream.

Addie awakens in the home of a man who introduces himself as Adam. Her handsome rescuer explains that since the snowfall has made the journey out of the valley impossible, she will need to stay with him until spring. Irritated by his commanding tone, Addie responds rudely to Adam, but to her shock he pulls her over his knee and spanks her bare bottom soundly.

Despite her fury at being punished in such a shameful fashion, Adam’s dominance ignites desires in Addie that she never would have expected, and soon she is begging for more as he takes her long and hard. Addie’s situation becomes far more complicated, however, when a huge, ruggedly attractive brute of a man named Armel confronts Adam and attempts to claim Addie for himself.

As events unfold around her, it eventually becomes clear to Addie that what she saw back in the cave was no dream. Adam and Armel are both shifters, one a wolf and the other a bear, and they both want her as their own. Will Addie be forced to choose between them, or can the two fiercely dominant beasts find a way to share their headstrong little human?

Publisher’s Note: Taken by the Alphas includes spankings and sexual scenes. If such material offends you, please don’t buy this book.

“You need to learn how to behave,” he informed her as his fingers curled around the waist of her pants and tugged them down over her ample bottom. Addie let out a strangled squeal as her panty-clad butt came into his view.

She felt a sudden flush of shame that made her want to reach back and cover her cheeks, but of course, that wasn’t allowed either. He grasped her wrists and pinned them at the small of her back, leaving her suspended from the fulcrum of her crotch over his hard thigh as he started to spank her again.

The slaps felt much harsher and sharper over less covered skin. The heat and thud of what had been little more than a warmup was much preferable to the way her skin stung with prickling pain as his hand landed again and again, making its way across both her cheeks, up and down until there was not a part of her bottom that wasn’t stinging.

The more he spanked, the smaller she felt. Her panties were drawing tight across her cheeks and between her thighs, putting pressure on her mound and the whole affair was beginning to feel very intimate.

Adam’s fingers began to peel her panties down over her cheeks with a slow, almost teasing touch, distracting her from her questionable memories of men who could become wolves. Now all her attention was on her sore bottom, the heated skin that was being put on display for this stranger with the hard hand.

She opened her mouth to complain about him depriving her of the last scraps of her modesty, but for reasons she couldn’t rationalize to herself, all that came out was a soft little moan as he smoothed his hand over her bare cheeks in slow circles. The feeling of his skin against hers was almost comforting. It had been such a long time since any man had touched her. She usually ran off her boyfriends in a matter of weeks. Addie wasn’t sure she would be able to run off this guy if she wanted to. He was very… stubborn. Was that the word? No. More than stubborn. He was dominant. He was commanding. He wanted her bottom bare and so it was, no questions and no arguments.

“Then maybe you should get some earplugs,” Addie quipped with a giggle. She knew it was going to get her another hard slap, which it promptly did, but by her reckoning it was more than worth it.

“Take this seriously, brat,” Adam said. “It can be much more painful if it needs to be.”

The threat was delivered in tones serious enough to make the smile drop off her face and set her hips in embarrassed, squirming motion that was soon encouraged by a series of swift slaps meeting her bottom in a brisk barrage, leaving her gasping. The sting was so much more potent now that his hand could touch her skin. Even a relatively light tap relit the fires that had been stoked more deeply in her bottom.

This couldn’t have been the first time he’d spanked someone. He was too practiced about it. There was an art and a science to it as he spanked her right to the brink of crying out in pain and then receded before pushing her toward that verge again, every time seeming to deliver more punishment to her squirming cheeks.

Addie found herself swept away from her thoughts into a torrent of sensations. There was the thudding of his hand on her bottom and the sting that followed. There was the heat inside her flesh that was traveling through to the core of her, pressing her now naked crotch against the rough fabric of Adam’s jeans.