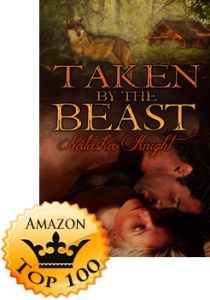 Taken by the Beast, a hot-as-hell new shape-shifting romance, as well as Natasha Knight‘s first paranormal novel, has made Amazon’s Erotica Top 100 List!  And that’s not all! Right now, because of Natasha’s excellent efforts in the erotica genre, she is also currently #56 in Amazon’s Top 100 Erotica Authors! Congratulations to Natasha Knight, and we’re excited to experience what she comes up with next!

Make sure you let us know what you think! Here’s what people are saying so far about Taken by the Beast!

Taken by the Beast is a juicy shifter book by Natasha Knight. This book had me creaming my panties from the first spank scene. First of all, who doesn’t just melt over the abduction/seduction scenario? It’s one of my favorites. And pairing it with spanking romance is a shoe-in for hotness.

Elijah is the last shifter of his clan after they were wiped out by a group of humans trying to study them. He is laying low, watching over Kayla, the hot blond who lives in his apartment complex. When Kayla’s ex-boyfriend (who is still her roommate) gets abusive while he’s all coked up, our hero tears in (in wolf form) to rescue her, killing her ex and his buddies, who very well might have gang raped her.

Knowing that the killings will alert the scientists who are interested in studying him, and fearing they will go after Kayla as well, he grabs Kayla and makes a run for it. She puts up a spunky fight, and of course, there is good reason to apply a little discipline to keep her in hand.

Here’s a tiny example of what happens to Kayla when she refuses to remove her panties for a punishment. Elijah has her strung up, her wrists tied above her:

He walked behind her. “One more thing,” he said, taking her panties down to mid-thigh. “When I tell you to strip naked, you strip naked.”

She made a sound of protest.

“Feels even more exposed, doesn’t it?” he asked, coming around to meet her eyes, which filled with tears.

“If you drop them, you’ll get additional strokes added to your spanking,” he said. He then leaned against the wall, folded his arms across his chest and waited, his eyes never leaving hers.

Apart from the drool-worthy spank scenes, the action in the book is excellent, with the danger from the evil scientists scenario running, complete with explosions, daring rescues and double-crosses.

I highly recommend this book to all spankos here, there and everywhere.

Very very good book that definitely has a little bit of everything and shapeshifters to boot. Great story with an interesting plot and detailed characters.

Steamy story with lots of unexpected plot twists. This one keeps you on the edge of your seat. Loved the raw sex and swats.

Excellent story with lots of action and romance and yes spankings. Loved the shapeshifter aspect and all the twist and turns the story had.