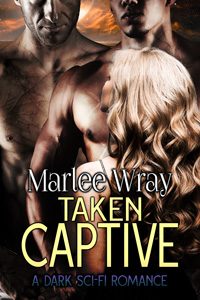 When you make enemies of men like them, you pay the price.

Zawri never wanted the infamous renegade who saved her sister’s life to end up in prison as a result of her lies, but her efforts to prevent her family’s complete disgrace sent him off to jail anyway. Now his crew has taken her captive, and they have plans for her. Very shameful plans.

She will be stripped, examined, and punished in the most humiliating ways imaginable. Then, with her helpless arousal on full display, her virgin body will be claimed roughly not by just one of the infuriatingly sexy rogues but by all three of them at once. When they have used and enjoyed her thoroughly, they may let her go… or perhaps one of them will decide to keep her.

Publisher’s Note: Taken Captive is a stand-alone book which is the fourth entry in the Owned and Shared series. It includes spankings and sexual scenes. If such material offends you, please don’t buy this book.

“The best you could would’ve been to tell the truth,” Wex said.

Tok strode to a built-in cabinet and took out a thick rubber phallus with its attendant straps. “Open,” Tok said.

The crop whistled through the air before it landed on the girl’s buttocks.

“All right,” she shrieked. She opened her mouth.

He slid the phallic gag in and secured the straps. He smoothed her hair back from her face. He wanted to see her pretty eyes as she cried, as well as her lips stretched around the invading toy.

Wex spanked her swollen ass thoroughly. He alternated a cupped hand with a flat open palm. The red turned to crimson, warmth saturating her flesh. Her frantic cries from behind the gag weakened to sobs and tears spilled over her lashes.

“Let her cool. Then a few, seven, with the crop. One for each month,” Linc said.

Tok squeezed his cock through his skin pants. He did not want to come. Or actually he did. Inside her innocent little pussy. He concentrated, trying to hold the lust at bay.

Roll stroked her back and whispered comforting words.

“You can take the gag out,” Linc said, smoothing lotion onto the girl’s scalded buttocks so that the globes looked like ruby fruit.

Tok wanted to get his hands on those hot globes. He wanted to squeeze them while she whimpered and writhed. He wanted to separate them, to expose her little star of an anus. He would fuck that pretty little hole too when she’d been stretched and trained to receive a cock in her tight ass.

Tok put a hand on Roll’s shoulder. “Don’t pet her too much. This is punishment that she earned.”

When the gag was removed, her noisy sobs faded into almost silent crying.

“One for each month,” Tok said, pushing Linc aside. Tok patted each buttock, which were still a deep red. The crop would hurt a lot. He steeled himself against hesitation. The girl and her sister had almost cost Larsinc his life.

He swung the crop with medium force. It snapped against her flesh. She shrieked as a fiery line rose.

“That’s one,” he said evenly. Then he laid them down steadily until he reached six. Her screams had reached a crescendo. He held out the crop to Linc, but the warrior shook his head.

Tok swung the crop, letting it land low on her buttocks, right where they joined her thighs. She shrieked out a curse, then dissolved into tears.

Tok slipped a hand down and stroked her wet pussy, rubbing moisture over her clit before he began to rub it.