Taken by the Tycoon by Normandie Alleman 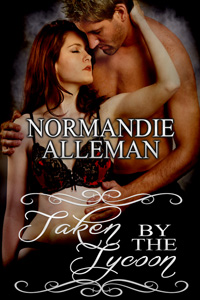 He reminds me of the men who grace the walls of stores where my daughter shops. Men with rippling abs and sinewy ropes of muscles. Men intended for younger women.

I never expected him to notice me. Imagine my surprise when he cornered me in the locker room, pressed his incredible body against mine, and forced me to acknowledge a desire more powerful than anything I’d experienced before.

Now that he has introduced me to the pleasures of being dominated, he wants to possess me completely. But how can I risk my heart, when I know his affection will never last?

“Lie down with your head hanging off the bed here.” He pointed. “Do as I tell you.”

He stood, hovered over her beside the bed. “Open your mouth,” he commanded.

Violet obeyed, and Stuart fed her his cock slowly, inch by inch, until touched the back of her throat. From there he thrust in and out past her gag reflex. He pulled out long enough to allow her to breathe. With him on top of her, in this helpless position, she was at his mercy.

Violet felt a twinge of panic, but she willed herself to remain calm. She trusted him, and she knew that it was experiences like these that deepened their bond. As he thrust into her mouth, Violet was torn between focusing on the sensual pleasures of swallowing him, and trying to breathe. All of a sudden her clit lit up as he licked, nipped, and prodded her lower lips.

Heavens! More sensations to contend with.

Stuart finger-banged her pussy at the same time she choked on his cock. Oh yes. This is pure torture. The delicious kind.

Violet jumped and squirmed, tried to scream and flailed her arms, wishing he would stop assailing her private parts, but her protests went unanswered. Stuart continued to face fuck her and devour her pussy at the same time, nibbling on her as if she were his last meal.

When she began to kick, he merely asked, “Is there a problem? Do I need to tie your feet to your wrists?”

He smacked his forehead as though he were a dunce. “Duh, I’d forgotten you like bondage. That would not be a punishment for you. Never mind.”

He slowly removed his cock from her mouth. “Fine. You know you can be such a brat?” She nodded, wiping her face.

As if he reading her mind, he said, “Oh, you look a mess, but that’s how a good little cocksucker should look,” he said with a devilish grin. “Now, stay in that position and open your legs.”

Oh dear. What did he have in store for her now?

“You didn’t let me finish so you are going to get a spanking,” he said.

Violet twisted to give him access to her ass, but Stuart held a hand out to stop her. “Oh no, you are not going anywhere.” At first she didn’t get it. He had said spanking… but he had told her twice now not to change position. She lay on her back and he’d told her to spread her legs. Dread started to crawl up her body now. Oh no. He was going to spank her pussy!

Too stunned to utter a protest, Violet stayed still with her legs spread. It seemed like a dream as he reached his arm up over his head and smacked her right on the labia. It hurt, but to be honest it didn’t hurt as badly as she feared it would. A tiny spark of pleasure accompanied each sting to her flesh. He popped her several more times, and she thought they were finished. She survived. Proud of herself, she smiled at him.

“We’re not done,” he said. “Spread those pussy lips so I can spank that little clit.”