Taking Her in Hand by Marlee Wray 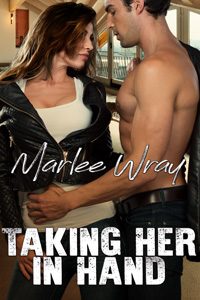 Laci had just aged out of foster care and was jobless and sleeping on friends’ couches when she met Colin. He gave her the loving attention and firm-handed discipline she needed, and soon they were married and living happily in Haywood Hills, a community of likeminded people where a man spanking his wife when she is naughty is nothing out of the ordinary.

Then Colin died of a sudden, tragic illness, and Laci has been lost ever since. After a year of increasingly irresponsible behavior on her part, things finally come to a head. When Laci invites outsiders into Haywood Hills and her recklessness puts everyone at risk, she is given a choice. She can accept the guidance and correction she clearly requires or leave the community.

The man tasked with taking her in hand is Eric Renard, a close friend of Colin’s whom Laci has always considered too stern. When Laci reluctantly agrees to the community’s demands, she quickly finds herself over her handsome new guardian’s knee for a painful, embarrassing bare-bottom spanking in front of a room full of witnesses. Eric makes it clear that he will not put up with Laci’s sharp tongue and defiant attitude, and over the coming weeks his intimate, shameful punishments leave her with blushing cheeks and a burning backside on more than one occasion.

Eric’s bold dominance rekindles Laci’s passion in a way she thought nothing ever could, and part of her cannot help yearning for him to claim her properly, but is she truly ready to put aside the past and make a place in her heart for him?

Publisher’s Note: Taking Her in Hand includes spankings and sexual scenes. If such material offends you, please don’t buy this book
.

“Go hang up your clothes before I change your punishment to include the cane. You know if I use that, you won’t be able to sit down through dinner and people will guess why.”

She grabbed the hanging bag of new clothes and marched up the stairs. When she finished putting them away, she stood in the closet, chewing on her lip. Why did he need her to come into the guest room for this punishment? And why—

She pursed her lips and scowled. He was so ridiculously heavy-handed. She’d never actually officially agreed that he was her master in all things. He was just supposed to keep her in line when it came to her health, not her—

She jumped and then rushed out of the room. She did not want to be caned on the night of a dinner party. Or ever. The cane hurt too much.

She entered the guest room. Eric stood next to a box on the dresser. Curious, she started toward him, but he held out a hand.

“Take off your clothes and lie on the bed.”

She sucked in a breath. Was he going to make sex part of her punishment? If so, would she use her safeword? Yes, of course, she would. Only maybe not right away, because she wanted to know what he had planned.

She stripped out of her shirt and skirt. She was used to taking her punishments with her panties pulled down or off, but she wasn’t usually completely topless. She left her bra and panties on.

“I’ll take the panties off right when the punishment starts.”

“You’ll take them off now because I said so.”

She felt like she’d stuck her face in a fireplace and flames were licking her cheeks. She gave him a rebellious look, but pushed her panties down over her hips and let them drop all the way to the floor. She interlaced her fingers and lowered her clasped hands to block his view of her pussy. She wasn’t sure why she felt the need. Maybe it was because usually he was behind her and saw her bare bottom, but not the rest of her. Normally Eric didn’t inspect her.

“Then take off your bra and put your hands on the back of your neck.”