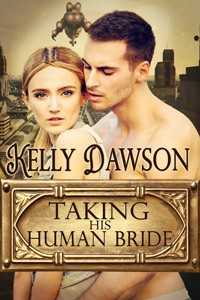 Less than a day after two gruff military officers detain her and escort her to a government facility, Melissa Malone finds herself leaving the planet on a newly-built spacecraft heading for one of the moons of Jupiter. Unknown to most of the world, an asteroid is hurtling toward Earth and, due to her unrivaled computer skills, Melissa is one of a select group of people chosen to rebuild civilization should humanity prove unable to avert the approaching cataclysm.

Melissa’s situation rapidly goes from bad to much worse when the ship is attacked and the crew is easily overcome by what she can only assume are aliens. Melissa is taken captive along with everyone else, but while the others are to be sold as slaves, she quickly discovers that her captors have special plans for her. She is stripped naked for an intimate, incredibly humiliating medical examination, and when she fails to do as she is told during the shameful procedure she is punished thoroughly, leaving much more than just her bare bottom burning hot and sore. Once she is deemed suitable, Melissa is given as a bride to a powerful officer named Damian.

Though she is horrified by the prospect of being taken as a wife by a man who makes it clear that he will expect her absolute submission and will sternly punish any defiance, Melissa soon learns that Damian has laid claim to her for a reason. He is on a mission, sent by the leaders of his world to infiltrate and bring to justice the band of renegades who took her captive… and he needs her help.

Despite her fury at Damian’s willingness to compel her obedience with a firm hand applied to her bare bottom, she cannot help delighting in the way her body responds to his touch, and his skillful, dominant lovemaking brings her to heights of passion she never imagined possible. But when the time comes for her to put her abilities to the test with the fate of the Earth on the line, can she outwit a rogue computer expert and prove that Damian’s trust in her was well placed?

Returning to her side, Damian slapped her pussy with his fingers, a hard, punishing slap that both stung and left her wanting. His searching fingers found her protruding nub and squeezed it, teasing it, making her dizzy with desire. She could feel herself growing wet as he stimulated her clit, then he flicked it hard with his forefinger and slapped her pussy with a loud, wet splat. She groaned.

“You’re a very naughty girl,” Damian scolded her, slapping her pussy sharply again. She arched her bottom up to give him better access as his fingers delved inside her once again, his thumb rubbing circles on her clit, his fingers exploring her innermost crevice, sending tingles through her body. She moved her hips in time to the rhythmic thrusting of his fingers, moaning in pleasure at the erotic sensations overwhelming her. But just when she came close to the edge, he withdrew his fingers, flicked her clit, and slapped her pussy several times with hard, stinging swats that made her cry out in pain, stopping the impending orgasm in its tracks. There was no relief for the aching need deep within her and she groaned softly. What was he doing to her?

“Stay there,” he told her sternly as he left the room.

She remained in position but danced on her toes at the pain in her rear and the aching tightness in her pussy. Tears were still streaming down her cheeks.

In less than a minute, Damian was back, holding a jar of lube in one hand and a glass butt plug in the other. She looked at him in horror out of the corner of her eye—the butt plug looked huge! Instantly, her mind went to Lucas and the events of the day before, when the chief medical officer had violated her tightly puckered hole and Lucas had spanked it. And now, by the looks of things, it was about to get violated again.

“No!” she gasped, standing up straight, her hands reaching around to protect her bottom. Damian pushed her back into position and held her down firmly.

“Yes,” Damian insisted. “Your bottom isn’t in a fit state to be spanked any more, but you still need to be punished.” Dipping his finger in the lube, he rubbed the grease all over her bottom hole, lubricating her thoroughly.

“No, please,” she begged him, her voice breaking. “I’m begging you, please don’t do this. I will be good, I promise!”

He held her bottom cheeks apart with one hand and touched the cold plug to her, pressing it gently, igniting that burning ring of fire the chief medical officer had first introduced her to.

“Press back against it,” Damian suggested softly. “It will hurt less.”

She obeyed, pushing her hips back against him, trying to relax as the hard, unyielding glass slid inside her slowly. As Damian pressed the plug all the way in the stinging eased, and she felt uncomfortable and full, but not in pain. He patted her bottom lightly.

“Good girl,” he whispered. He tugged on her hair gently. “You can stand up now—go stand in the corner there with your bottom on display for me.” She stepped out of her pants that had pooled at her feet. With his hands on her shoulders he guided her gently over to the corner of the lounge and pressed her nose to the wall. He placed her hands on her head. She kept them there obediently. She didn’t want to cooperate with him; she wanted to resist him, to fight his punishment, but her bottom was so sore from the spankings he’d given her, and she definitely didn’t want him to pull out his whippy plastic cane again, so she stood there, uncomfortable as she was with such an abomination in her ass, and pouted. A lone tear trickled down her cheek as she stood in the corner with her nose to the wall and her bare bottom on display. Hot desire from her denied orgasm still lingered in her pelvis and she was utterly miserable, defeated.