Taking His Mate: An Alpha Shifter Romance by Delta James 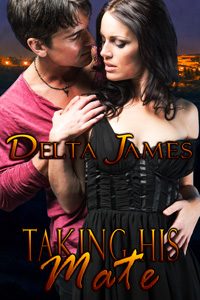 She is his to protect, whether she likes it or not.

Years ago, Madeline Stone was attacked by a rogue band of wolves. Now they are hunting her again, but to get to her, they’ll have to go through Griffen Owen. The ex-Special Forces operative is the rightful alpha of his pack, and the moment he sets eyes on Madeline he knows the beautiful, feisty human is his mate. But to keep her safe, he will need to teach her to obey.

Doing as she is told doesn’t come easily to Madeline, and it isn’t long before she finds herself naked, helpless, and tearfully promising to be good as her bare bottom is soundly spanked. Her mate’s mastery of her body is put on full display as Madeline is brought to a quivering, shameful climax while still over his knee, and soon she is begging to be taken hard and thoroughly.

Madeline’s need for Griffen only grows stronger as she is marked and claimed, and his savage lovemaking leaves her in no doubt that she belongs to him. But with war brewing between the packs, can Griffen protect his mate from both their enemies and her own headstrong defiance?

Publisher’s Note: Taking His Mate is a stand-alone novel which is the fourth entry in the Wayward Mates series. It includes spankings and sexual scenes. If such material offends you, please don’t buy this book. Also note that Taking His Mate shares its setting with Adaline Raine’s previously published books Marked by the Alpha and Rules of the Pack, and it was written only after receiving Adaline’s permission and support.

“You were a very naughty mate, weren’t you?”

“Madeline, when you are being punished you will answer me as either yes, Griffin or yes, sir. Do you understand?”

“Yes, sir.” The honorific rolled off her tongue as though she’d been using it for years.

“Were you not told that if you left the house without a proper escort you would be spanked?”

“Then we’ll have no more argument about it. Come, Maddie.”

Griffin took her by the hand and led her back to the bed. He sat down and gently pulled her toward him, encouraging her to accept her spanking with good grace. He settled her over his hard thigh, trapping her legs between his.

“Maddie, my love, there is nothing for you to do. You need to accept the fact that I am about to blister your bottom for disobeying me.”

She reached behind her to try to guard her backside. Griffin growled low and caught both of her hands in his. He petted her backside.

“I want you to remember this the next time you think to disobey me.”

Griffin drew his hand up and brought his open palm down on her upturned rump, making her yelp in response. He set up a strong, hard rhythm as the swats landed on the fullest part of her ass cheeks. Maddie squirmed and struggled, trying at first to get away from him and then just trying to avoid the blows that he rained down on her.

The pain and heat radiated off of her hind end. She could only imagine that it was once again being turned bright red. She could swear she could feel it swelling from the hard strikes he was administering.

“No, Maddie. You earned yourself a hard spanking and I mean to give it to you. You will learn to mind me, mate.”