Tamed by Her Mates by Sassa Daniels 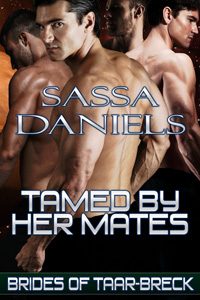 Charlotte Calder wasn’t looking for romance when she left Earth and it’s tyrannical government behind, and she certainly wasn’t expecting to be claimed as a mate by four alien warriors. After she makes a rash decision and attempts to break the bond they share, however, Charlotte learns the hard way that she is theirs for life and her foolish behavior will be very thoroughly punished.

Despite her protests, Charlotte is stripped bare and put on display for a painful, humiliating spanking, and she soon finds herself blushing crimson as she is fitted with a collar and placed in a cage. As her fury grows with each new indignity, her need for them grows as well, but when they decide to reclaim her publicly she fears that the shame will be more than she can bear.

Though Charlotte does her best to remain defiant, their stern dominance arouses her deeply and before long she is screaming her helpless pleasure into the sheets as one brutally intense climax after another is ripped from her sore, well-used body. But with her mates in the midst of a war for control of their planet, will they be able to keep Charlotte safe from their many enemies?

Publisher’s Note: Tamed by Her Mates is a stand-alone novel which is the fourth book in the Brides of Taar-Breck series. It includes spankings and sexual scenes. If such material offends you, please don’t buy this book.

“You will wear this collar as a symbol of your new status,” he announced.

Although tears pricked her eyes at what she had been reduced to, she nodded in agreement and Jax fastened the collar around her neck. It was not unbearably tight, but she still felt it pressing against her throat and she knew she would not be able to forget its presence for a single second.

“Now that it’s in place, we will not remove it. For as long as we want you, it will serve as a reminder that you are ours to do with as we please.”

There was an implied threat that the time might come when they no longer desired her. If that day came, they would cast her aside, perhaps sell her off as Jax had threatened. It was a horrifying thought. Lottie lifted trembling fingers to touch the collar and sent up a silent prayer that it never be taken from her.

“She’s all yours,” Jax told Marc and Ren before he turned to leave the room.

Lottie watched him go, her brow furrowed at his departure, and then looked to the twins.

“On all fours,” Marc commanded as he moved around behind her.

She got into position and watched in fascination as the chain hanging between the clamps on her nipples swayed beneath her. Marc pressed a button and without warning the table lowered. Lottie had to catch herself before she lost balance and toppled over. The table stopped moving when it was at just the right height for Marc to fuck her from behind. She wondered whether he would take her pussy, which ached to be filled. Although she’d had little option, she did cooperate during the examination—well, for the most part, she did. Surely, she’d earned some reward.

When Marc squirted a drop of cold gel onto the pucker of her anus, she knew it was not his intention to give her what she wanted.

“Let’s get this gag off,” Ren said amiably. “I have plans for that mouth.”

The instant the hideous ball was removed, Lottie swallowed down the excess saliva that had pooled in her mouth. She scrubbed a hand across her lips and hoped she would never have to wear that damned thing again. Sucking in a few deep breaths, she worked the stiffness out of her jaw.

Marc pushed his thick cock slowly but insistently into her bottom, and Lottie gritted her teeth. No matter how often they did this, she still felt like she was going to be torn apart. It was painful, but in the best possible way. He rotated his hips and she gasped as her body adjusted to the fullness. Mere moments later, a different sensation gripped her—lust—and she needed him to move. Pushing back against him, she whimpered in need, but Marc held still, a reminder that her men were always the ones in charge. He would fuck her ass the way she wanted him to, but not until he was good and ready.

Ren unfastened his pants and directed his rigid shaft to her lips. Lottie took him into her mouth and swirled her tongue around his cock, feeling that zigzag protrusion under the skin that added to her pleasure when he fucked her. All Bylanthian men had a ridge partway along their penis that added an extra dimension to the enjoyment they could bring a woman. Ren and Marc had the same shape but Jax and Daen both had a row of raised bumps that drove her wild when they hit just the right spot.

Lottie moaned as Ren and Marc both pushed deep inside her at the same time. They stilled as though in concert with one another and then began to thrust. Sucking lightly on Ren’s cock as he slid in and out of her mouth, she tried to concentrate on pleasuring him. It was impossible with Marc pounding furiously into her rear. All she could do was hold herself steady and take the hard fucking they were both intent on giving her. When Marc drove into her bottom, she was pushed forward, and Ren’s cock slipped further down her throat. It took all her effort not to choke as her mouth was filled to capacity. She whimpered and writhed on the table, trying to find some way to alleviate the pressure building inside her. While Ren stroked her cheek with tenderness, coaxing her to take all of him, Marc reached beneath her and tugged the chain linking the nipple clamps. Pain shot straight to her clit, which throbbed with need and she screamed around Ren’s cock.

Tears of frustration poured down her face as satisfaction remained elusive. It would be so easy for Ren to play with her breasts as Marc fingered her clitoris, but it was clear they would do neither. This was for their pleasure and her punishment. Denying her what she desired was as effective as the harshest whipping.