Tamed by the Aliens by Rose St. Andrews 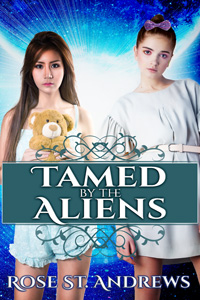 When Geena and her best friend Mioshi are sent on a mission to rescue a Deep Space Corps pilot who vanished after making first contact with an alien species, they have no idea what to expect.

It turns out that their ordeal is just beginning, and as they continue their search Geena and Mioshi soon discover that a spanking is far from the most embarrassing thing in store for them. In some places on this strange world, adult women are treated as little girls, and before long Geena and Mioshi find themselves being bathed, diapered, fed from a bottle, and put to bed in a crib.

In spite of their shame at being treated in such a humiliating fashion, however, Geena and Mioshi cannot deny their intense arousal at being dominated so thoroughly. But when their mission is complete, will the two humans return home or stay with the aliens they have grown to love?

An attendant was coming toward them, a truly big one. He even made Geena feel small. Smiling down at them, he gathered them up in his arms. Mioshi looked all of about ten alongside him!

“Come along, little ones, bedtime,” he said happily.

Geena did a classic double take, even as Mioshi’s face exploded in the most massive expression of total shock and awe. It was clear she was amazed that she’d said it.

“Now, now, precious, look at the sun,” he said, his tone mildly scolding. “We have barely five degrees until darkness. We’ll get you settled down to bed in no time.”

Once inside, he passed them off to Devon and Fallon, who laid them out on changing tables and slipped their diapers off. Both of them blushed bright red. They were wet, but that didn’t matter to the girls, they didn’t want to be cleaned like real babies. The men wiped them down, dusted them lightly with baby powder, and put clean diapers on them. Then it was back to the cribs to be put down on their tummies. Geena was confused by that, but then she felt hands on her bare back. For night, the ladies were in nothing but a diaper, and so she felt the warmth and supple strength of his massive hands and fingers knead and caress her flesh.

Geena sighed and groaned. “Ahhh, wonderful! Man, I haven’t gotten a good rubdown in ages.” She let out a soft squeak as she felt his hand pat her lower on her back. He gave her a good massage, but he also gave her the occasional very light swat on her bottom.

“Just relax, little one, and I will see you off to sleep. We have consulted ‘The Book.’ A gentle rubbing to aching muscles is most relaxing, and adult baby girls often fall asleep better when their cute little behinds are lightly patted.”

Geena just sort of gurgled. She wanted to refuse any more touches, to refute his words, but her body overrode her mind. Lying there, feeling more and more settled down, her hips kept rolling back to offer up her ass to his gentle swats. It eventually got to where he was only patting her bottom. She lay there, gripping the sheet as she chewed her lip, and felt dampness grow between her legs. Her bottom was still sore from the paddling, but between the diaper’s padding and his light smacks, flames were soon wrapping about her pussy. When he stopped, she almost shouted in protest.

“Darkness comes, little baby,” Devon said. “Sleep well, and I shall see you at the dawn.”