Tamed by the Bear by Loki Renard 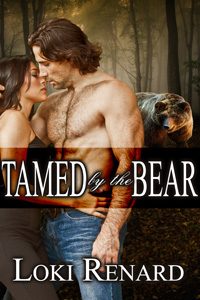 When twenty-one-year-old Riley Reynolds decides to take a year off from college to study grizzlies, she chooses Black Falls, Wyoming as her base of operations. But after the local sheriff, Ethan Stone, hears about her plans, the handsome lawman warns her sternly that if he catches her anywhere near a bear she’ll be in for a long, hard spanking she won’t soon forget.

Not taking the sheriff’s threat seriously, Riley sets out into the nearby national forest to get started, but when she stumbles upon a mama grizzly and her cub she finds herself in terrible danger. Her life is saved by the arrival of an even larger, more fearsome bear, but to her shock the massive beast transforms in front of her eyes and moments later Ethan stands before her.

The shifter sheriff tosses Riley over his shoulder and wastes no time in bringing her back to his den, where he promptly strips her naked and chastises her thoroughly for her foolishness. A painful, embarrassing spanking is only the beginning of her punishment, however, and soon enough Riley is blushing crimson and quivering with desire as Ethan takes her harder and more fiercely than she would have ever thought possible.

Now that he has claimed her as his mate, Riley quickly discovers that Ethan will expect her complete submission, yet even as she rebels against his strict rules she cannot deny her body’s response to his skillful, dominant lovemaking. But with a vicious poacher prowling the woods and killing for sport, can Ethan tame his feisty mate before her disobedience gets them both hurt or killed?

He used his other fingers to gather more lubrication from her dripping lips and applied her juices amply, his finger sliding in and out of her tight little rear hole as she squirmed her empty, wanting pussy all over his lap. She was blushing furiously, her desire, her shame, the discomfort of having her virginal bottom penetrated all combining to overwhelm her senses.

“T-talk?” Talking was the last thing on Riley’s mind.

“Mhm…” He pressed his finger to the second knuckle and slowly thrust it in and out of her bottom with long, considered pumps. “You’ve not spent a day studying wildlife, have you?”

“No…” she admitted in a small voice. “But I want to. And I did already do a couple of years in college.”

“Liberal arts,” she admitted with a touch of shame that did not solely arise from the fact that her bottom was being toyed with while she was being interrogated.

“Uh huh. Not so useful when it comes to bears, is it?”

“No…” Again her response came in a whine as his finger went in and out of her.

He pushed his finger deep into her bottom and her excuse evaporated into a moan.

“You lied to me,” he repeated. “Since we’ve met, you’ve been acting like a naughty little girl, haven’t you? Lying. Disobeying me. Putting yourself in danger.”

Her anus contracted involuntarily around his finger. He was right, of course, but to admit it while he fingered her bottom and took control of her body in the most intimate way possible, that made her stomach fizz with excitement, her lower abdominal muscles clench, and her pussy start to flow with arousal.