Tamed by the Buccaneer by Normandie Alleman 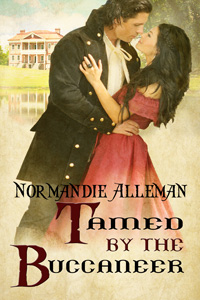 Life as a buccaneer in the Caribbean in 1668 is not for the faint of heart, but at least Gaston Galette has a beautiful wife at his side and in his bed. During the day she serves as the ship’s physician, while at night in his cabin she is his saucy yet submissive wench.

But after countless brushes with death, Gaston has begun to wonder if it might be time to give up swashbuckling for good. The urgency of the matter is increased when, despite her stubborn refusal to acknowledge the obvious, it becomes clear that Frederica is carrying his child.

Having already lost one family years ago, Gaston cannot stand the thought of losing another, and as far as he is concerned it is time to start building a new life on dry land. Fearing the loss of everything he holds dear, Gaston is determined to convince Frederica to return with him to the Carolina colony and the home he left behind so long ago. But will the strong-willed lass allow herself to be tamed by the buccaneer?

“I don’t see what business it is of yours where I go or what I do,” she spat.

He chortled at the ridiculous assertion. “My dear, long before you were my wife, you agreed to be my slave. Slaves do what their master commands them. And when you became my wife, you promised, took a vow, to love, honor, and obey me so how can you question my interest in your whereabouts?” He paused. “Especially in your condition.”

“What condition is that?” Sally piped up.

Frederica glared at her pointedly. “That is none of your concern,” she said in a measured tone.

Ignoring her, Gaston said proudly, “I believe my beloved wife shall be presenting me with a son in a few months.”

Sally’s hand flew to her mouth in an attempt to hide her smile. She looked at Gaston, then at Frederica, her eyes shining merrily.

Frederica rolled her eyes. “That’s enough of that.” She straightened her spine.

“In any case, my wife is due a punishment. That’s clear enough.” Gaston turned to Sally. “Would you like to help me to administer it?”

Sally giggled. “It would be my pleasure, Captain Galette.” A mischievous look crossed her face.

“Now see here…” Frederica attempted to increase her haughtiness, but Gaston and Sally simply ignored her.

“Help me rid her of this ridiculous costume,” Gaston said to Sally. They began to pull her blouse over her head. Underneath she wore an undershirt that was almost transparent in the lamplight. The outline of her heavy breasts cast a shadow on the wall.

“Stand up,” Sally barked sharply, and Frederica appeared too surprised by the tiny woman’s command to disobey. She stood and Gaston stood back while Sally yanked down her pants and removed Frederica’s boots.

All that was left covering Frederica were her shift and her drawers. Gaston raised an eyebrow. “Remove all of it.”