Tamed by the Highlander by Emily Tilton 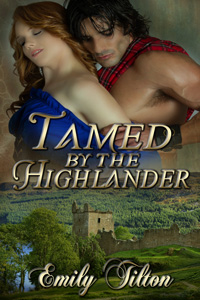 When raiders fall upon Urquhart Castle, Elisabeth Grant, the daughter of the castle’s lord—a highlander by birth, but educated in the lowlands—is left defenseless when her cowardly father abandons her. At the last moment, her life and her maidenhead are saved from the raiders by Angus MacGregor, the proud highlander she had only hours earlier ordered locked in the pillory for his insolence toward her.

Vowing that she will see her home rise from the ruins after the attack, Elisabeth resolves to stay as close to the castle as possible. With her father and his soldiers gone, however, she has nowhere to turn for protection except to the highlander who so recently rescued her. When Angus informs her that he has no interest in a ward or a servant, she impetuously offers to wed the uncouth, yet undeniably brave and handsome highlander whose firm words and strong arms both terrify and excite her.

Angus agrees to marry Elisabeth on one condition: she will serve and obey him as a proper wife should, and if she fails in her duties, she will be soundly spanked. She agrees to his condition, but when she surrenders to his touch one moment and defies him the next, his desire for her only grows fiercer. Though it quickly becomes clear she will not yield without a fight—and a taste of his leather strap upon her bare bottom—he soon discovers she is like no woman he has ever known, as being chastised until she is writhing and begging only increases her lust for him.

But when her father returns to rebuild the ruins of Urquhart even as the threat of another assault on the castle looms, Angus wonders whether Elisabeth will abandon him and return to the life of a noble lady. Even if she stays by his side, will their newly forged bond be shattered in the heat of battle, or will their love and courage be enough to withstand the swords of the marauders?

“Is it only you who get to make the naughty pay, then, Elisabeth Grant?” Angus said, and angered at her haughtiness despite himself, he pulled up her blue woolen gown and the silk chemise underneath with his right hand, while, as she began to struggle again, he continued to hold her down with his left.

He felt himself stir under his plaid as he exposed the lovely bottom of the nineteen-year-old Lady of Urquhart and even caught a glimpse of her tender young sex as the kicking of her legs exposed it to his view. He pushed the images that came to mind—of using his advantage to enjoy her here in the barn, over the hay bale, the way the MacDonalds would have—back down deep into the furthest reaches of his imagination, and he began to reap what he could not but think of as his just reward, giving her pert bottom cheeks what he was sure were the first three spanks they had ever experienced.

Elisabeth cried out as if she had been stuck with a dirk. Angus was grimly thankful for the cries of drunken congratulation coming from the castle and now from the market square, where they would be pillaging and drinking—and sadly and worse for the people of the town who had not managed to get away—all night.

“How’s that, milady?” he asked, mockingly. “You don’t like being the one punished?” He spanked the lovely bottom again, three more times, right, left, and center. The feeling of the little cheeks bounding under his open palm presented rather a danger, he realized, for his yard was now swollen to its full size, and her continued kicking, with the glimpses of her lovely pink cunny— lightly thatched with golden curls—that her kicks provided him, only seemed to increase the stiffness there.

“Stop this instant!” Elisabeth hissed. “This outrage will be visited back upon you, man—I promise you that!” She struggled against his arm, and sadly for the state of her rump, the struggling made him spank her harder: three, six, nine, twelve hard spanks from a hand whose great strength had come from building in stone and fighting with the claymore since he had risen twelve, these ten years past.

Now Elisabeth was sobbing, and suddenly the fight seemed to go out of her, and she lay limp across the hay bale. Her bottom was a fiery red all over, and her legs had stopped kicking, somewhat to Angus’ regret.

He stopped spanking her, but he couldn’t resist resting his hand upon her shapely rear, sure that he would never have the chance to feel such an aristocratic bottom again and loath to lose the last of the novel, wonderful sensation.

“There, milady,” he said, weighing both the little cheeks in his big right hand. “I hope you learned something about Highland dignity here in this barn and over this hay bale.”