Tamed by the Rancher by Adrienne Blake 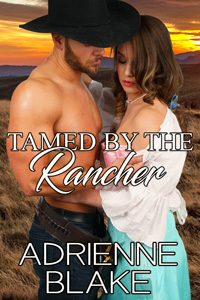 After twenty-year-old orphan MacKenzie is caught stealing a wallet from Jed Whistler while he’s visiting Five Points, Manhattan in 1888, she is shocked by his reaction. Rather than get the law involved, the handsome Texan takes her over his knee for painful, embarrassing bare-bottom spanking. More surprising still, after the stern chastisement he offers her a job on his ranch.

During the long train ride to Texas, MacKenzie learns the hard way that Jed is more than ready to punish her as thoroughly and as often as necessary to teach her honesty and respect. But though she spends much of the trip sitting quite uncomfortably, she cannot help being drawn to Jed’s firm-handed dominance, and she soon finds herself imagining a future as his wife.

Upon arriving at Jed’s ranch, however, MacKenzie quickly realizes that she will need a new set of skills if she is to make herself useful. With the aid of a finishing school run by a particularly strict headmistress, over the coming months Mackenzie learns to behave like a proper, obedient young lady, and before long she has fallen deeply in love with Jed. But is he merely doing a good deed by helping out a girl like her, or is there truly a place in his heart for MacKenzie?

Publisher’s Note: Tamed by the Rancher includes sexual scenes and spankings. If such material offends you, please don’t buy this book.

“I’m going to ask you one last time, little lady—where’s my money?”

He sighed. “Well, you asked for it! For that little lie you’re going to get a sound walloping.”

MacKenzie barely caught her breath. Before she could protest again, a heavy hand hit her rear end hard. She didn’t think he would really do it! Stunned into silence, there was nothing she could do while five hard ones cracked across her skirted backside. But then her senses returned, and she fought hard against him, kicking out her legs but to no avail.

“I see you’re a hard nut to crack. Well now, shall we try this again, little lady?”

“You can beat me as much as you want, you won’t be the first! But I tell you I don’t have it.”

MacKenzie tried to get up but she was no match for his bulk. The hand that wasn’t spanking her had her pinned down good and proper. And this time he wasn’t messing around.

“What the…?” Before she knew it, her skirts were over her head and his spanking hand grabbed the top of her undergarments. Without a care for her chastity or propriety, the great hulk of a man pulled down her pantaloons, exposing her bare backside to anyone who happened to have a view of it.

She squirmed and fought hard, fearing for her honor and good name, when another resounding smack made her bare bottom cheeks flare up and sting from the pain. Oh, the shame of it! No man had ever touched her body before; she prided herself on her purity—a rare thing indeed in these parts—and without so much as a ‘by your leave,’ this man had exposed her femininity and was abusing her however he thought fit. She was terrified and bewildered at the same time. How easily this had happened. Prone as she was, he could do anything he wanted to her.

Oh, dear God, how I must look! MacKenzie thought. As she endured the pain of each well-aimed stroke, all she could think of was her bottom and pussy, high up in the air. She was painfully conscious of every smack to her cheeks. Every slap landed a little differently, and every time she experienced a raw tingling sensation.

And he could see all of it, was touching her just as he wanted, and worse—she could feel herself getting wet! He had to be aware of this—how could he not be?

“You’re a stubborn little lady,” the man said. “Anyone else would be crying out by now. But you brought this on yourself, and I ain’t stopping until I get what I want.”

No way was she going to give him the satisfaction of crying out. She was stronger than that—he’d soon see! But this time, as his hand caught the sensitive folds between her legs, MacKenzie couldn’t help herself. She gasped and bit her lip. Along with the pain there was an unexpected jolt of pleasure. His hand raised and came crashing down once more. The heat seared in her cheeks and, as mad as it was, she realized she liked the sensation of his hand on her backside.

But what did this mean? Was she not as pure as she’d always thought she was? Was she a bad woman after all, just like all the sluts that paraded on the street corners, flashing their wares at any man who glanced at them? Oh, dear God, no! And yet she could not deny the tickling sensation between her thighs. She wasn’t just wet—she was excited.

2017-08-20
Chris
Previous: The Billionaire and the Wedding Planner by Emily Tilton
Next: His Untamed Mate by Korey Mae Johnson