Tamed by the Sheikh by Emily Tilton 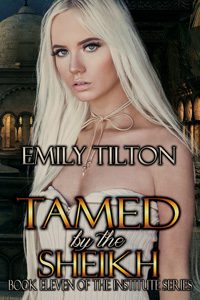 When Beatrice Graham is caught spying on a meeting between an influential senator and a powerful Arab prince, the Institute is left with no choice but to act quickly to protect both the naive eighteen-year-old intern and the secret she unwittingly overheard.

Once she has been taken into the Institute’s custody, it isn’t long before Beatrice is naked and blushing as she is thoroughly and intimately examined. After the humiliating ordeal reveals her long-hidden need to be mastered properly by a dominant man, she is sold as a concubine to Diyab al-Rashan, the handsome sheikh on whom she so recently eavesdropped.

Diyab promptly sets about training Beatrice, teaching her to offer her beautiful body for him to enjoy in any way he pleases and spanking her bare bottom soundly whenever she disobeys him. Her new owner’s stern punishments and fierce lovemaking leave Beatrice deeply ashamed yet satisfied in a way she never dreamed possible, but can she truly find a place for herself in the sheikh’s household?

“Call me Diyab, darling. Now. Not always, but now.”

“Diyab.” She felt her upper lip, her nose, wrinkle as she fought back more tears: his first name seemed to come from deep in her chest as she uttered it for the first time, in a sob of gratitude that she didn’t have to express the real, shameful gratitude she had begun to feel for his giving her no choice. Diyab had made her become the girl in the images, and Beatrice could even imagine, someday, telling him how very badly she had needed spanking when she had wanted, as shameful as it would have been, to thank him for the gift of his royal seed in her belly.

The finger left her anus, and the tiny aperture felt strange and itchy. Part of her wanted to dwell on the things Diyab had just said about what he would do back there, down there, but the resistance in her mind still felt too strong. Even though as he again began to stroke his penis, began to move to put it where it must go, she could not dispel her anxious curiosity about what it would feel like in the other place, the sensation of the strangely soft head of his hard manhood, pushing in, finally focused her attention there, where a virgin must submit to her defloration.

He had turned his eyes downward, where she knew he could see much better than she could the place for his cock to enter, and on his face now appeared the marauder again. She blushed to see the wolfish expression, but it made her give down more of the arousal she knew would make his path easier. That too, made her face hot, because with it came another contraction of her pussy that he must also be able to see; a little smile played across his bearded lips.

She felt him push in, up, and come against the barrier that took her breath away at the pressure. She couldn’t suppress a little cry, though she resolved not to scream, because wouldn’t he put her panties in her mouth if she screamed? Or even punish her?

More pushing; she whimpered, but she didn’t scream.

At last, then, he turned his eyes to hers again, and though she worried for a moment that he would be angry—even though he hadn’t revoked the permission to look at him—his smile told her she had nothing to fear.

Suddenly Beatrice wanted to cry for mercy, for delay—not because she truly desired it, but because that girl had to cry for mercy, didn’t she? She opened her mouth, but then she felt it open wider of its own accord, as her eyes went wide and wild too, because Diyab had taken hold of her upper thighs and driven his cock deep inside her.

Beatrice didn’t scream, but she gave a little whine, and closed her mouth and made her lips a tight line, as her master, her owner, her sire began to thrust back and forth inside her, looking from her face down to where his cock—bloodstained? It must be, because it hurts, but it should hurt that girl—now moved at will, then back up into her eyes. She had a terrible realization that somehow seemed to increase her desire and decrease the pain: the marauder liked to fuck his Western girl roughly. That girl—Beatrice, the girl in the images—knew that it gave him pleasure, and she writhed under him, struggled against him, so that he would feel like the marauder and she would feel like the marauder’s captive Western concubine.

“Oh, darling,” he said in a voice thick with his exertions. “So beautiful. So tight.” His eyes roved ceaselessly now among her face, her breasts as they bounced with his hard thrusting, her bare pussy filled over and over with his hardness. He bent forward, extended his arms to either side of her head and lay atop her, and to her utter astonishment she came as she felt his weight pin her down and his lap press against her most sensitive place. She cried out, and her hips bucked under him despite his weight.

“Diyab!” she called out, feeling it disrespectful and disobedient to call him that despite his permission, feeling she must be whipped for it and letting the idea of the whipping somehow extend her climax under his still pounding hips. The smile on his face now as he fucked her seemed one of triumph, and Beatrice had a sense of having been utterly vanquished, in that moment of pleasure, and then she writhed again under his cock, taken completely by surprise in a second climax.